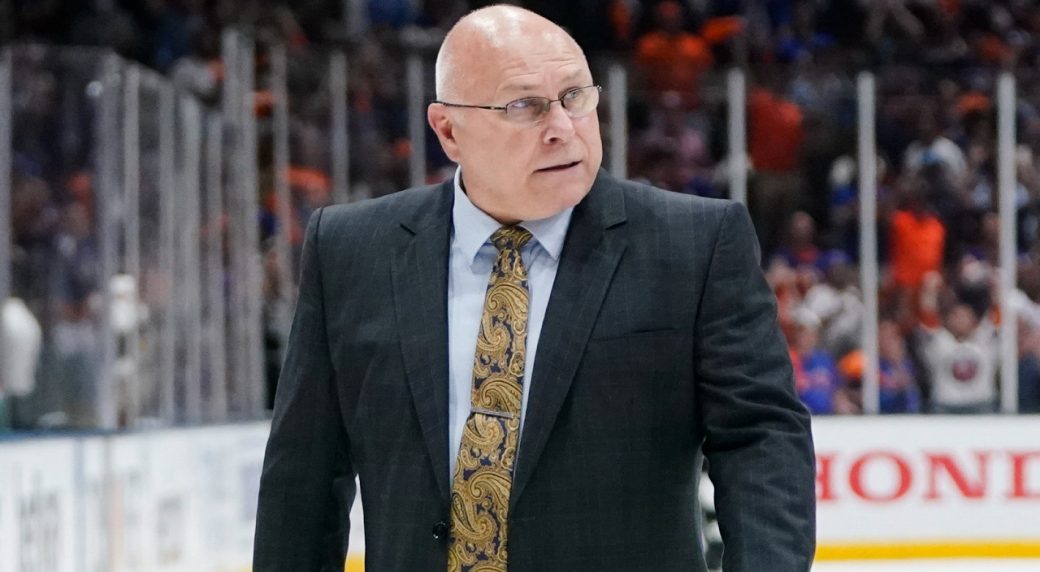 DENVER – #TrotzWatch has officially come to an end and the focus has immediately shifted to who is going to be Plan B.

It’s been clear from the beginning of the Winnipeg Jets coaching search that Barry Trotz was the No. 1 target to fill the position after the organization informed Dave Lowry he would not have the interim tag removed at the end of the season.

Trotz informed the Jets on Friday that he was not going to accept their offer to become the head coach and that he plans to spend the near future focusing on his family instead of being behind the bench.

The Jets made a lucrative and alluring pitch to Trotz, who has one more season on his deal with the New York Islanders at a reported salary of $4 million.

Ultimately Trotz decided that he would be best served by taking a step back to get recharged before making a decision about his coaching future.

Getting so close to bringing in Trotz is both a blessing and a curse for the Jets.

The blessing being that they got so close to securing the union with Trotz, a marriage that would have had an impact both on and off the ice.

Not being able to seal the deal would also bring a fair share of frustration, though the Jets would obviously understand the circumstances that led to the decision.

So where do the Jets turn from here?

Although several of the vacant seats in this game of musical chairs for coaches have been filled around the league, there are still a number of intriguing candidates looking for work, so it’s not like the Jets are going to have to settle on someone they don’t really want.

Second interviews will be on the horizon in the near future and there will be some names added to the list as well, especially after Paul Maurice replaced Andrew Brunette as the head coach of the Florida Panthers earlier this week.

Here’s a quick look at some of the candidates that are – or could eventually be – on the Jets’ radar:

It’s not often that a Jack Adams Award finalist is available and you can bet the Jets are going to check in with him about their vacancy, if they haven’t done so already. Brunette did an excellent job with the Panthers, taking over seven games into the season from Joel Quenneville under incredibly tough circumstances. All he did was lead the Panthers to the President’s Trophy and a first-round series win over the Washington Capitals. Sure, the Panthers got swept in the second round to the Tampa Bay Lightning but Brunette is far from the only guy who has been out-coached by Jon Cooper during the Stanley Cup playoffs. Brunette, 48, went 51-18-6 and he has ample knowledge of the Central Division from his time as an assistant coach with the Minnesota Wild. He would also bring 1,110 NHL games of playing experience and is known for his ability to connect with players.

The longtime NHLer flourished in his role as an analyst on the TNT panel and he might not be in a rush to get out off TV, but there’s also a belief he’d like to get back into the day-to-day activity of being a head coach. Tocchet spoke with Jets general manager Kevin Cheveldayoff during the Western Conference final and figures to be in the mix for a second interview when that process begins. Tocchet, 58, has six seasons of NHL experience as a head coach, going 178-200-60 during stints with the Arizona Coyotes and Tampa Bay Lightning, and also spent three seasons as an assistant coach with the Pittsburgh Penguins, winning the Stanley Cup in 2016.

There’s plenty of familiarity here, since Arniel spent six seasons with the 1.0 version of the Jets and nearly another decade as a player (three seasons), assistant coach (two seasons) and eventually head coach (four seasons) of the Manitoba Moose, leading the team to the Calder Cup final in 2009 before losing to the Hershey Bears. He’s made Winnipeg his home for the past few decades and he’s eager for another shot at the big chair, having gone 45-60-18 over two seasons with the Columbus Blue Jackets. He’s a well-respected assistant and associate coach and has been on the radar of several NHL vacancies during the past several seasons. Arniel, 59, has done some excellent work with the penalty kill on several of his stops, including the Washington Capitals and New York Rangers – and that’s an area the Jets could use some significant improvement. A source confirmed Arniel interviewed for the head coaching position during the first round of interviews.

The 52-year-old just finished his second season as an assistant coach on the staff of Craig Berube with the St. Louis Blues. It was an unceremonious ending to his time as the head coach of the Dallas Stars, but Montgomery has put in the effort to work through those issues. During his season and change with the Stars, Montgomery led his team to double overtime of Game 7 of the second round series with the Blues. He’s known as an excellent communicator and his teams are known for playing a sound defensive structure. Montgomery also had success at the NCAA level with the University of Denver Pioneers and won two USHL championships with the Dubuque Fighting Saints. Montgomery played one season with the Moose back in 1999-00, which means he’s familiar with how the organization operates but the link to the past wouldn’t be the reason he got a first interview and remains on the radar.

Prior to joining the Columbus Blue Jackets as an associate coach under Brad Larsen last season, Vincent spent the previous decade in the Jets organization, the first five as an assistant coach on the NHL staffs of Claude Noel and Maurice, the next five as the head coach of the Moose – where he enhanced his reputation as a great communicator. Prior to joining the Jets, Vincent spent 11 seasons as a head coach in the Quebec Major Junior Hockey League. Vincent, who had a hand in running the power play with both the Jets and the Blue Jackets, was involved in the first round of interviews and is believed to be on the short list for Round 2.

An assistant coach with the Lightning, Lalonde is one of the up-and-comers in the coaching ranks, a well-respected member of Cooper’s staff who has been with him during the past four seasons. Lalonde has taken a winding road to the NHL, spending eight seasons as an assistant coach at the NCAA level before winning a USHL title with the Green Bay Gamblers in 2012. Lalonde, who turns 50 in August, spent three seasons behind the Gamblers bench before moving on to spend two seasons with the Toledo Walleye of the ECHL. Lalonde then spent two seasons as the head coach of the Iowa Wild of the AHL prior to joining the Lightning. Lalonde is a former collegiate goalie who looks ready to make the next step, whether it’s with the Jets or a team like the Detroit Red Wings.

‘In a disaster’: Deaths of Indigenous girls in Winnipeg spark requires protected housing