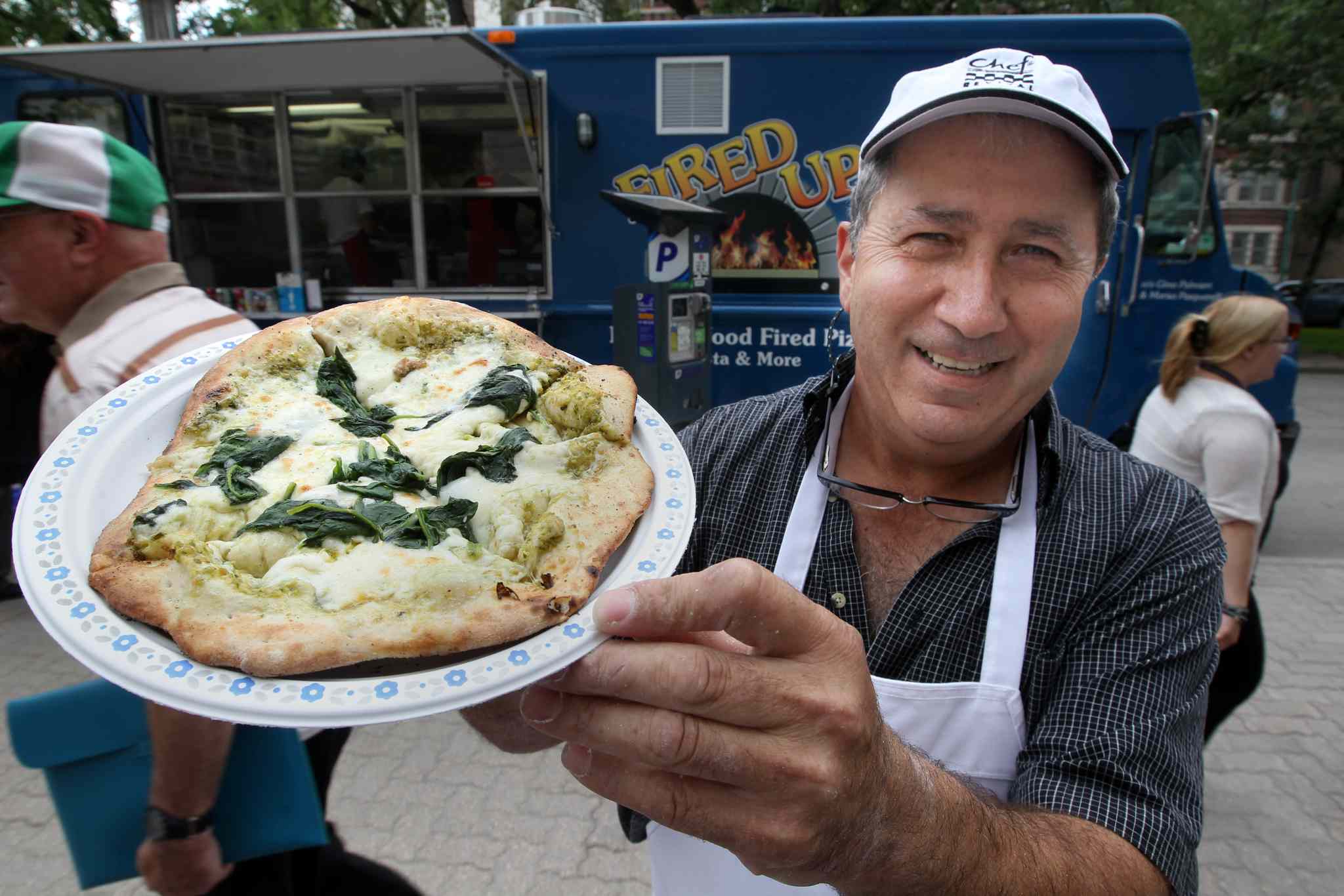 In the recent movie Chef, Jon Favreau plays Carl, the star talent at a pricey Los Angeles restaurant. He loses his job but ends up finding his soul when he buys a broken-down food truck. Slinging cheap and cheerful eats from his mobile kitchen, Favreau’s Carl joins a list of lovable food-truck-operating movie characters, including Jason Segel in The Five-Year Engagement, Michael Ealy in Think Like a Man and Anna Kendrick and Chace Crawford in What To Expect When You’re Expecting.

Hollywood uses food trucks as shorthand for authenticity and down-to-earth values, for following your passion and grounding your life in something meaningful.

Movie clichés aside, these rolling restaurants also happen to deliver great real-world food. And they’ve become a staple of the Winnipeg street scene.

Joe Bryksa / Winnipeg Free Press
Owner Gino Palmiera of the Fired Up food truck shows off one of his masterpieces, cooked in a wood-burning oven.

For Winnipeggers who want to grab every outdoor hour they can from our all-too-short summers, food trucks offer a chance for an urban picnic. On a recent sunny afternoon on Broadway, people streamed out of office buildings looking like school kids let out for recess. Many were heading to the 10 or so food trucks parked along the street.

The Broadway weekday lunch rush starts up around 11:30 a.m., weather permitting — it’s always weather permitting, as food-truck operators are quick to point out — and winds down around 1:30 p.m., having fed hundreds of hungry people. (This concentrated burst of activity means most food trucks are cash-only businesses to keep things moving along.)

As the busy Broadway experience suggests, the local food-truck scene has taken off in the last three years. The familiar hotdog stands and french fry wagons still attract lineups, but they’ve been joined by a fleet of new trucks jostling for prime parking in downtown hot spots such as the Exchange District, The Forks and along Portage Avenue.

Food trucks now add a culinary component to cultural happenings like the jazz fest and the fringe, and can be spotted at long-weekend celebrations, nighttime events, even neighbourhood block parties. Many trucks regularly head out beyond the Perimeter Highway, visiting festivals all over the province.

The popularity of these roving restaurants has been boosted by social media, which helps connect operators with their customers. These days, most food trucks have websites where you can browse menus and check prices. Many Winnipeg operators tweet their daily locations, so fans will know where to go for their fix of smoked meat poutine or coconut banana fritters. (You can find a pretty comprehensive listing of local food trucks and their contact info at pegcitygrub.com, an initiative of Tourism Winnipeg.) 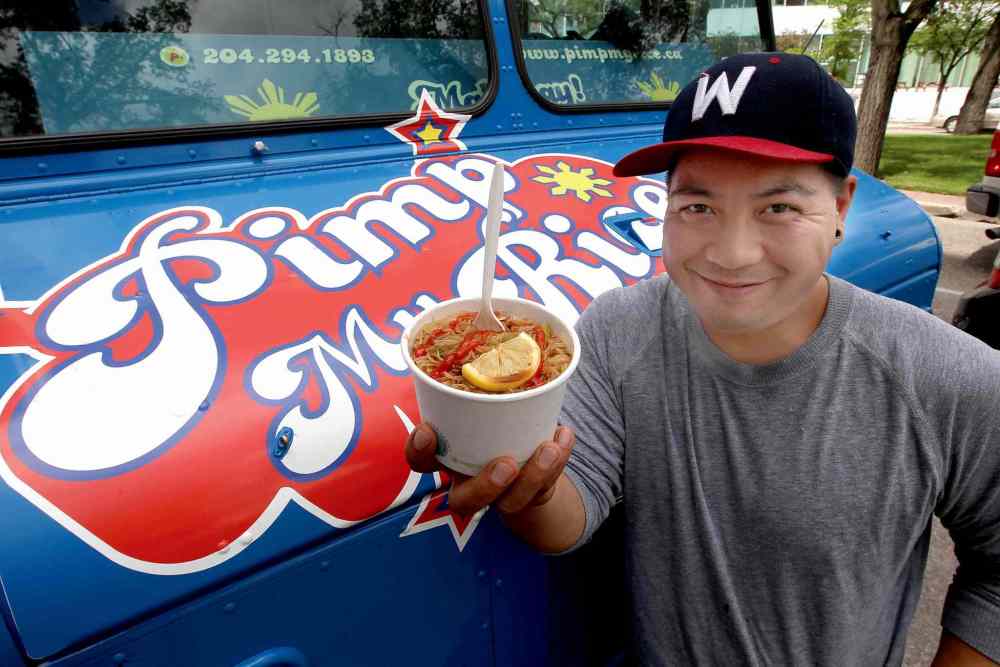 And most importantly, Winnipeg street eats have expanded their range beyond old-school burger-and-fry basics. Reflecting our city’s multicultural makeup, food trucks now offer many different cuisines, including Mexican, Ukrainian, French, Indian, Japanese, Filipino and Middle Eastern. These days, you can snag a black bean taco with pico de gallo and queso fresco at Habanero Sombrero; a plate of perogies at Mikky’s; or Japanese custard tarts at Tokyo Rabbit.

Food trucks also offer options for those looking for local or organic ingredients. You can get pasture-raised Manitoba beef at the Grass Fed Grill, or fresh corn with flavoured butters at the Corn on the Curb food cart. Cornell Creme, an upscale blue-and-white ice-cream bike manned by Daniel Pastuck, offers handcrafted ice cream from Manitoba dairy farmers William and Lisa Dyck, in flavours such as vanilla bean, lemon meringue and (coming soon) a coffee-maple concoction called Morning Maple Zing.

I decided to try an informal sampling of food truck eats — purely in the interests of culinary research! — starting at Beaujena’s French Table. This brightly painted truck offers upscale sandwiches, including a combo of duck leg confit and duck breast prosciutto and a high-end grilled cheese made with onion jam, Bothwell cheddar and Dijon mustard. I end up picking the dangerously named Death by Bacon, which combines pork belly, slow-braised for 20 hours, crisp bacon and chili mayo, cut with a little coleslaw. It’s a celebration of super-rich pork fat. (At the Free Press, we would call this a “Doug Speirs-ian” level of pork fat.)

A block away, I order a pesto, spinach and provolone pizza at Fired Up. The truck’s wood-burning pizza oven, imported from Italy, reaches temps of up to 375 C (700 F) and blasts an individual pizza in about 90 seconds, explains co-owner Gino Palmieri.

This super-hot cooking method adds a slightly smoky taste and yields a crust with just a touch of char on the underside and a tender, slightly chewy top. 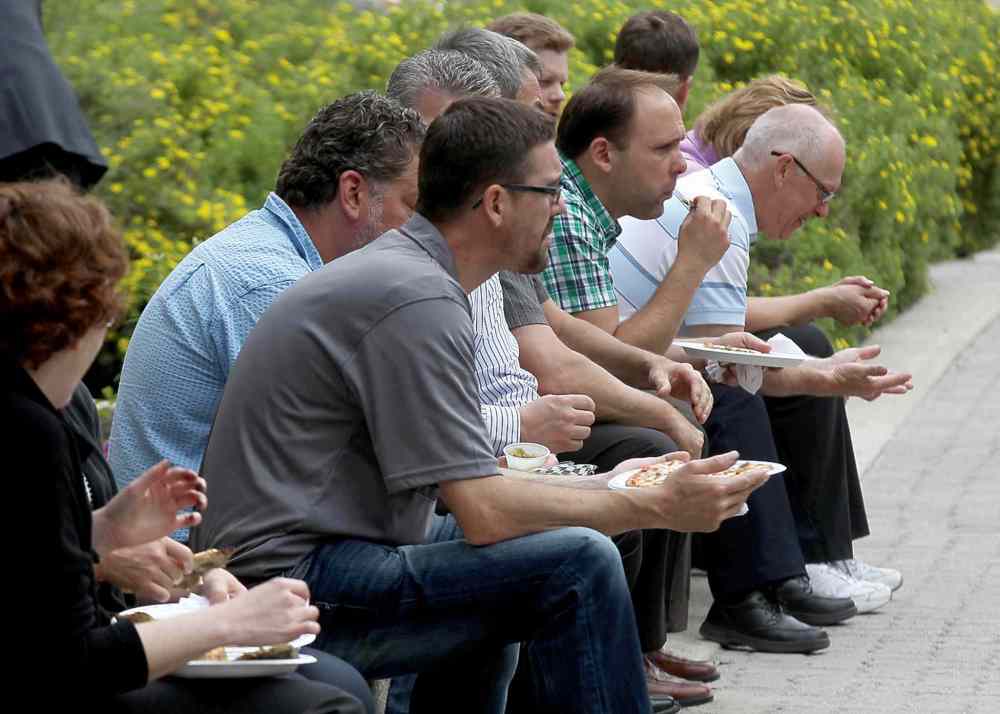 Crossing the street, I check out Pimp My Rice, a fan favourite that serves up Filipino food from an attention-getting blue truck. I decide on pancit, a dish of rice noodles spiked with vegetables, perfect with a drizzle of sriracha hot sauce.

This is the third season for operator Roddy Seradilla, and he seems to thrive on the pace. The turnaround time for most orders is “as long as it takes to fry an egg,” he says.

The food truck business is “busy and crazy for four months, maybe five. It takes a month to decompress.”

Even a quick stroll down Broadway at lunchtime demonstrates that downtown food trucks offer a satisfying foodie experience, with all sorts of tasty, fast, fairly inexpensive grub. Just as importantly, they offer an urban experience. These movable feasts energize the street, bring out the crowds and make a city feel like a city.

Watching people as they sit on steps or perch on concrete planters, talking and trading bites, you get an undeniably happy vibe. 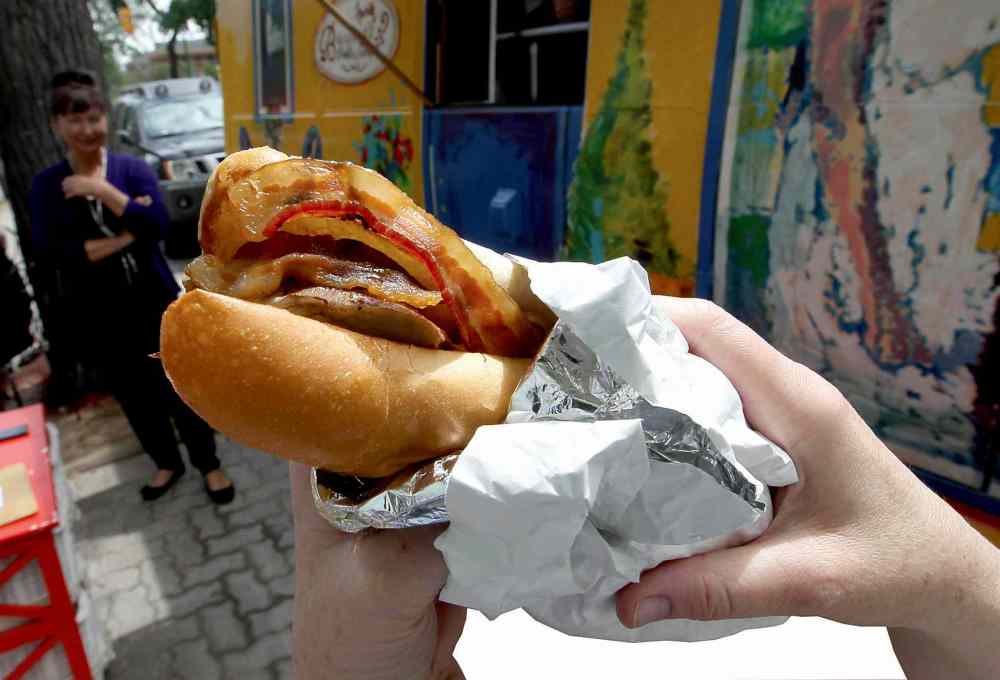 Maybe those Hollywood movies are on to something. 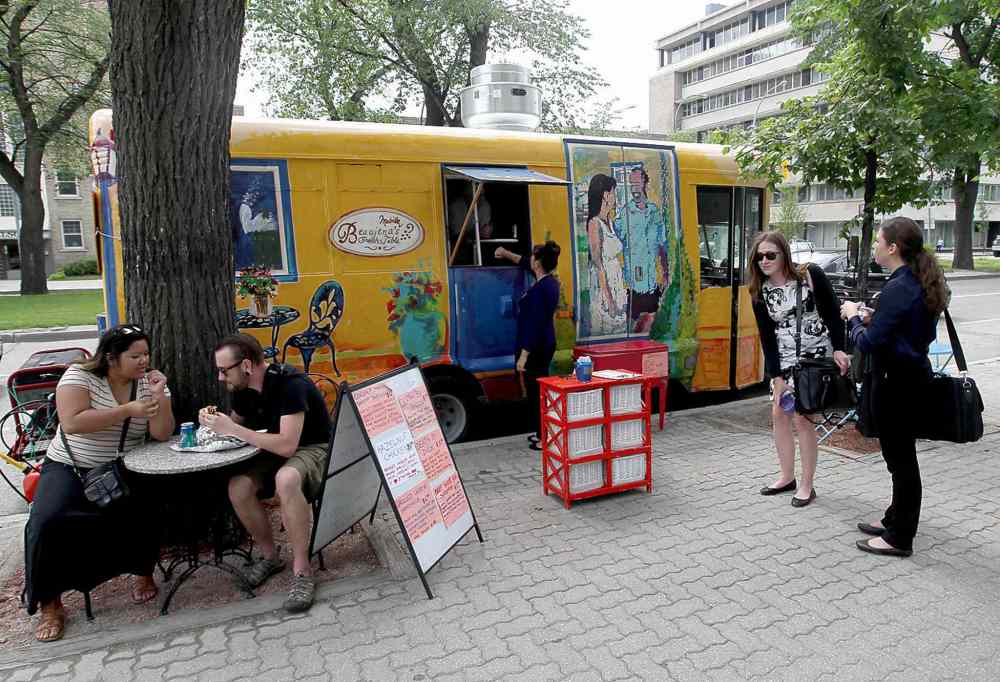