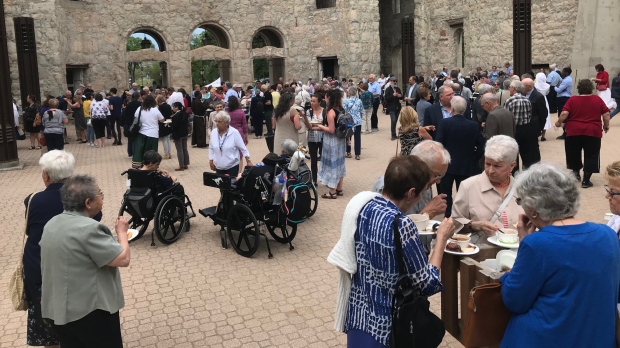 Crowds gathered on the steps of the historic St. Boniface Cathedral on Friday, marking the 175th anniversary of the arrival of the Grey Nuns in Winnipeg.

Answering the call for religious educators, four hardy sisters left the relative comfort of Montreal to travel to the Red River Valley in 1844.

These original four Grey Nuns arrived on the banks of the Red River 58 days later, and their congregation remains in the city to this day. Elaine Beate, a Grey Nun since 1983, believes the nunnery’s longevity is due to their faith in “collaborators.”

“The men and women who were already here, and came along the way to help them construct life in a more dignified manner,” she said.

Asked to describe the first sisters, Beate called them “trailblazers” — women who travelled hundreds of kilometres to serve an unknown community. That’s one of the reasons she took her vows with the Grey Nuns.

“I appreciate the very ‘incarnational’ aspect of really putting into action the conviction that the values profess,” Beate said.

Declining in age and population, Beate is confident the work of the Grey Nuns will continue.

“There is a change in the numbers, if you look at it that way as far as membership is concerned, but in another way the numbers are increased by the lay person who are partaking of the spirit and mission that we have,” she said.

Ought to the Jets Signal Veteran Ahead, Frans Nielsen?