One of Winnipeg’s oldest parks — dating back to a time when public spaces were known as ornamental squares or “breathing centres” — is getting renewed recognition.

The Winnipeg Architecture Foundation has launched a walking tour booklet that showcases the history of Central Park, a 125-year-old green space that was once a retreat from the bustle of the city life but is now in the thick of it.

It highlights architectural features of the park, like the 1914 Waddell Fountain and its quirky background story, and the changing neighbourhood surrounding it.

The booklet contains old photos of the neighbourhood and park just north of the city’s downtown — with some before-and-after images of the architecture that remains.

“There’s just this wealth of information, and quite a wonderful collection of different buildings and landscapes that we wanted to highlight,” said Marieke Gruwel, an architectural researcher at the Winnipeg Architecture Foundation.

“It’s also an important part of the city that’s worth highlighting.”

The Benard House at the corner of Edmonton Street and Cumberland Avenue, seen in 1903, left, and 2019, right. (City of Winnipeg/Winnipeg Architecture Foundation)

The idea for Central Park was planted in 1893 when the newly formed Public Parks Board bought property to create Winnipeg’s first four parks.

In its annual report from that year, the board stated it would establish “ornamental squares, or breathing places, throughout the city.”

To develop several smaller public green spaces, rather than developing one large suburban city park, was an unusual plan for a Canadian city back then, according to Catherine Macdonald’s book A City at Leisure: An Illustrated History of Parks and Recreation Services in Winnipeg.

It wasn’t until 1909 that Winnipeg opened its first big suburban park — City Park, later renamed Assiniboine Park — on what was then its far western fringe. An early photo shows Edmonton Street with Central Park on the left, when it was much smaller. (Peel’s Prairie Provinces/University of Alberta)

Those first four parks, or breathing spaces, were:

The land for Central Park was purchased from the Hudson’s Bay Company for $20,000 and developed in short time, opening in 1894 to serve the booming city’s middle class. Groups of men play checkers in Central Park in the summer of 1962. (University of Winnipeg Archives/Hugh Allan collection)

It quickly gained popularity as a spot to get away from city life, with a tennis court, bandshell and large gardens in place by the early 1900s, according to the WAF booklet.

The Waddell Fountain was installed in 1914 to commemorate Emily Margaret Waddell, who loved the park and often visited it. She died in 1909 and her will contained a strange provision — should her husband, Thomas, ever remarry, he would be required to donate $10,000 to the city for construction of a fountain.

In 1911, when Thomas was engaged to be married, he was in debt due to some real estate investments that went belly up, according to local historian George Siamandas. It took two years, but Thomas acquired the funds and met his obligation. The fountain was designed by local architect John Manuel, who later relocated to Alberta to direct construction of Canadian Pacific Railway hotels at Banff and Lake Louise.

After many years of neglect, the fountain was in desperate need of rehabilitation and in 2010, the city undertook a major restoration that included repairs, cleaning, and carving new pieces to replace missing and damaged ones.

The Central Park neighbourhood has since gone through many changes, as much of the middle class population moved to suburban areas and the park’s use fell into decline.

The number of people living in the area decreased through the 1970s on, and the park’s popularity fell. Apartments replaced many of the houses in the area and crime rates spiked.

The Central Park area has since transitioned into a community for many new Canadians with diverse cultural backgrounds, and serves as a starting point for many immigrant and refugee families beginning new lives in the city. The Central Park area serves as a starting point for many immigrant and refugee families. (Mary Lou Driedger/Destination Winnipeg)

Where it used to be a place for people to get away from city life for a country feel, it is now located in one of the most densely populated parts of the city, with 15,000 people per square kilometre, according to the City of Winnipeg.

In fact, according to a 2008 CBC report, 70 per cent of all refugees coming to Winnipeg at that point lived downtown, largely settling in and around the Central Park area.

In 1985, the city hired a landscape architecture firm to design an extension to Central Park. It used to end at Qu’Appelle Avenue but a section of that street was closed off, allowing the park to be expanded to Ellice Avenue.

The plan was to link Central Park to the legislative grounds but the development of north Portage, and the construction of Portage Place mall, snuffed that out, according to the WAF booklet. 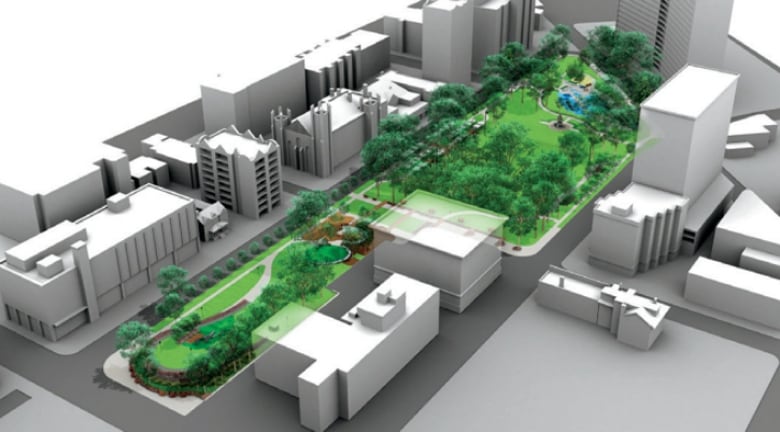 In 2008, the city launched a major revitalization of the park, completed in 2012 for $5.6 million. It added a wading pool and spray park, artificial turf, four-season slides, and an interactive sand and water play area with a play structure.

Through it all, the park and much of its historical beauty remains. However, for many, it hasn’t been able to shake the reputation it gained in the ’70s as a dangerous area.

“The reputation stems from when it was rundown and not safe, but it’s actually really popular and widely used,” said Gruwel.

“It’s an important space for people to meet, play soccer; there are so many different uses for it.” Actors with Shakespeare in the Ruins perform a production of A Midsummer Night’s Dream beside the Waddell Fountain in Central Park. (Mary Lou Driedger/Destination Winnipeg)

The architecture foundation hopes its walking tour can shine light on an important and historical neighbourhood that is now one of the most diverse gems in the city.

Central Park is now establishing a new sense of community and culture through live entertainment in summer and outdoor markets that sell handmade and imported African clothing, beadwork, handicrafts, weavings, art, and organic produce, according to a description from the city. Winnipeggers throw cupfuls of paint onto canvases in Central Park as part of a community event in 2015. (Jeff Stapleton/CBC)

“I think every neighborhood always has its challenges and I think Central Park today is such a wonderful gathering space and it’s such a fun place,” said Gruwel.

The WAF offers occasional tours of Central Park, and those who take them are often surprised, she said.

“Everyone is often, ‘Wow, I didn’t know this this was here. This is so amazing … there’s so many fun things to do in the area.’

“So I really I think folks should go down and check it out for themselves.”