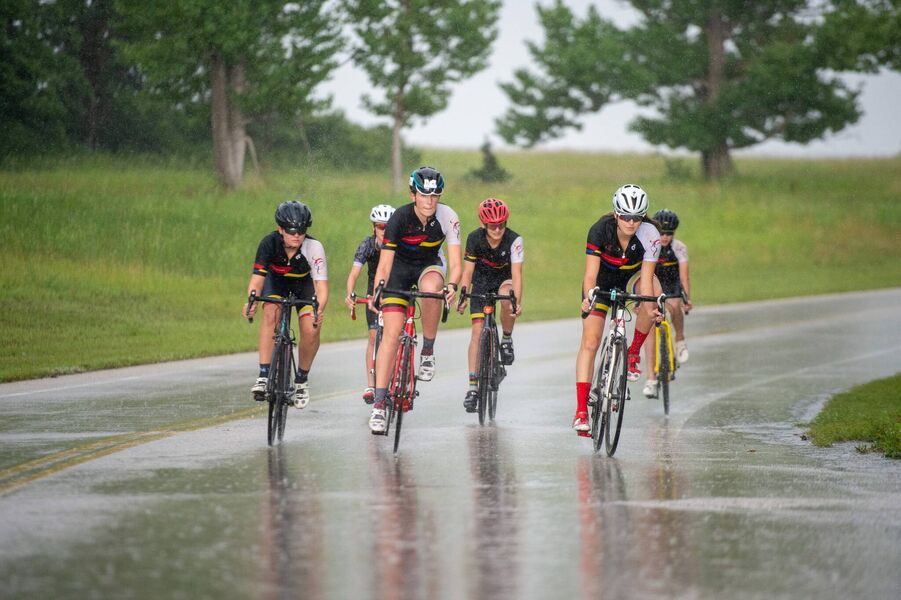 BIRDS HILL PARK — The pandemic has been tough on athletes in most amateur sports.

Training has been limited and competitions have been harder to find.

For some, such as Winnipegger Anja Krueger, a competitive swimmer since she was 10, the tighter restrictions placed on her sport helped lead her back to an old favourite.

The 19-year-old who attends University of British Columbia still considers the pool a priority but the lure of triathlon has become irresistible.

“I think of it almost as a little bit of a changeup,” said Krueger, in a recent interview with the Free Press. “During COVID, a lot of athletes struggled in their sports and I won’t hold back that I definitely didn’t swimming as well. This past year has definitely been me finding my footing physically and mentally in swimming again.

“But triathlon is just something that I can come back to always and it’s fun, it’s different. It really mixes things up for me, and I’m lucky that I have the running background and a little bit of a cycling background, but I can kind of put everything together.”

Between March of 2020 and July of 2021, Krueger was unable to train with her Manta club teammates, and she rejoined the provincial triathlon team under the guidance of Triathlon Manitoba head coach Gary Pallett.

In 2016, she earned a silver medal in triathlon at the Manitoba Games and, since returning recently to the provincial program, has established herself as the province’s top female medal hope for next month’s Canada Summer Games in Ontario’s Niagara region.

And so, combined with three weekly workouts with her triathlon teammates at Birds Hill Park, Krueger is still in the pool 10 times per week for swim workouts, ranging between 90 minutes and two hours each. In the fall, she returns to UBC for her second year, but her triathlon activities have been well received by her university coaches.

“I’m taking it very casual right now,” said Krueger. “It’s kind of a day-by-day, month-by-month thing. But when I first mentioned (triathlon) to them, they were very supportive and just said, you know, your health and wellness comes first as long as you’re taking care of yourself and making sure you’re not taking on too much.”

Another teammate, 17-year-old Winnipegger Natalie Fournier, has top-10 potential at the Canada Games, while 18-year-old Blake Harris, also of Winnipeg, is considered a definite medal threat.

Recruiting athletes for triathlon changed in the last two years.

“With COVID, our numbers and in all sports numbers started dropping,” said Pallett. “And so when we were looking to recruit people, I had to go after swimmers because there was no way to teach people (to swim). To get new bikers or runners, there was no way to bring them in because they couldn’t swim. So, it was easiest to convert a swimmer.”

Many athletes, Pallett admitted, missed the camaraderie of team workouts.

Cole Buxton, a six-year veteran of the sport, was one of those who stuck it out. He’ll also be going to Ontario next month.

“I was quite impeded and hindered by the pandemic,” said Buxton, 17. “And I just set my goal on making the team and I just hope to perform at my best the Games.

The Summer Games, originally scheduled for 2021, were pushed back a year and the age limit for triathlon was recently increased from 20 to 21. Some athletes left the program.

The province has a track record of success at the Canada Games, with Sarah-Anne Brault winning individual bronze in the 2009 Games, Tyler Mislawchuk taking silver in 2013 and Kyla Roy capturing a bronze in 2017.

“On the top end Blake has a shot at a medal,” said Pallett. “We’re in tough because a lot of our team is younger. Anja will be our oldest athlete at 19. At 21 and under, since they’ve changed the age group, it’s gonna hurt us. Blake’s 18 and he’ll be racing against 20- and 21-year-old men.”

Krueger plans to use her speed in the water to gain an early edge.

“I think in any sport it’s always great having a lead off the front of the race and I think that was really valuable,” said Krueger. “I learned that really young when I would go out and do triathlons when I was like 11 or 12, and I would come out of the water first I was like, ‘Woo hoo, this is great!’ ”