At the end of last summer, Tara Garcia and her husband Jacko bought a second food truck. For the owners of The Churro Stop, the plan for 2020 was to spend the summer at two festivals every weekend from spring break until September.

Then the COVID-19 pandemic hit Manitoba, wiping out major events for the foreseeable future.

“It was a big change. We started to panic a little bit and go, ‘How are we going to survive our season?'” Garcia said.

Now, the Garcias have changed their expectations for the season, renting space to park their white truck in a private parking lot, picking up shifts themselves and slinging empanadas and churros at Confusion Corner. It’s different from the long lineups of people waiting to order food as a festival, but they’re hoping to make the most of the summer.

“It’s definitely slower,” Garcia said. “But, you know, small business owners are ready to adapt to any situation … [We’re] just trying to kind of salvage the season.”

It’s a change that reflects what many food truck owners in Winnipeg are experiencing as their usual business plans turn to dust.

For Derek Collins, who owns four food trucks in the city, that adjustment meant only taking one of them out onto the streets this summer. These days, Poutine King is parked in a lot on Pembina Highway near the University of Manitoba.

“We’re not even doing any private catering or nothing like that. We’ve just decided to keep it simple,” Collins said. “We just decided to go on a busy road and it’s been successful so far.”

Collins said he’s getting foot traffic and some people who drive over just to buy his food, but with fairs across the country cancelled, it’s still a far cry from the busy summer he was hoping for.

“It’s almost a 100 per cent loss compared to last year,” he said. “Right now, we’re just trying to make ends meet and make sure our trucks survive for the summer.”

For Joyce and Garry Powers, who have owned Sis and Me Mobile Catering for 25 years, the change brought on by COVID-19 has been unlike any challenge they’ve faced as food truck owners operating on Broadway.

“The customer had so many choices. It was like an international city down here,” said Garry. “[Now], there’s no business. Next to none.”

“We will never be able to catch up,” Joyce said. 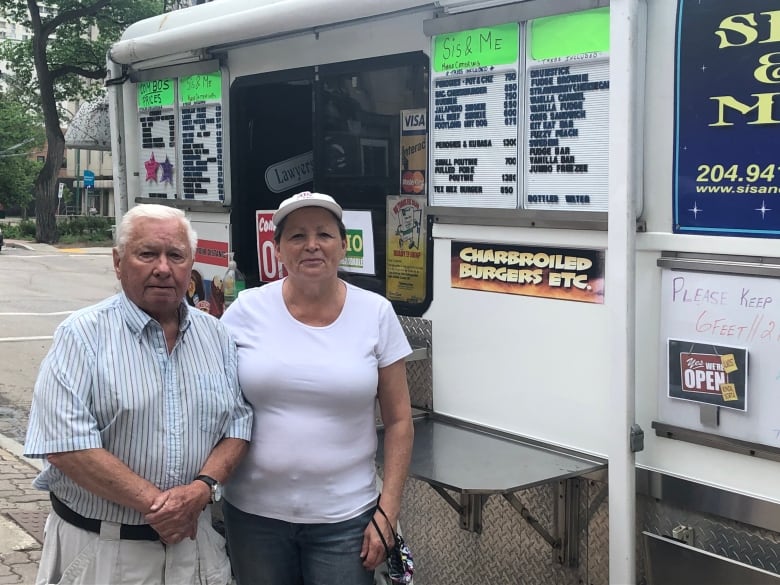 Joyce and Garry Powers own the Sis and Me Mobile Catering food truck. (Shannah-Lee Vidal/CBC)

Still, the couple say they’re surviving — but they won’t be able to afford to bring out their second food truck this summer. They said they were hoping the City of Winnipeg Parking Authority would have been open to making changes like lowering fees to help struggling food truck owners like them during the pandemic.

“We’re trying to work around the COVID thing,” Garry said. “Half the season is gone by now and they still insist on charging us $3,500.”

A spokesperson for the city said the parking authority reduced the pricing of the 2020 summer permit for food truck owners to give a one-month discount on the seasonal rate.

As Manitoba moves into Phase 3 of its COVID-19 reopening plan and allows outdoor gatherings of up to 100 people, owners of food trucks like Sis and Me and The Churro Stop are feeling hopeful about the rest of the summer.

But Collins said many trucks like Poutine King rely on major outdoor events that still aren’t allowed, so even gatherings of 100 people won’t be enough to make up his losses.

“We’re based on working with major fairs like the Red River Ex, which is, I’m guessing, a lot more people than that,” Collins said. “We’re just gonna go with the flow and see how it goes and we’re gonna continue adapting if this goes on longer.”

For Garcia, seeing restaurants around Winnipeg close their doors permanently during the pandemic was a wake-up call that The Churro Stop would need to come up with a new plan to stay in business.

“It took our heads coming together and … kind of figuring out, ‘OK, how are we going to do this? How are we going to stay afloat?’ You know, six years in, we sure don’t want to give up just yet. So it’s been a lot of imagination and reorganizing, but I think we’re doing OK.”