A Winnipeg woman is overwhelmed with gratitude after community members, organizations and social media users rallied together to help find her 10-year-old dog, Oswald, after her vehicle was stolen while the pet was inside last week.

On the morning of Nov. 10 — which happened to be her birthday — Tanis Olson made a spur of the moment decision to leave her goldendoodle in her blue Honda CRV while she quickly ran in to St. Boniface Hospital.

The car was running with the radio on, and she left a bowl of water for the pup. But when she came outside shortly after, her car was gone — and so was Oswald.

“In that moment, you can’t even understand how alone you feel,” said Olson, who first thought maybe her SUV had been towed.

After calling several companies to no avail, she filed a police report.

“I felt guilty [and] terrible. I could have taken him home, not left him in the car. I didn’t know where to look, if they drove away or if he was running around.”

With no indication of where Oswald was, she and her friends made social media posts asking people to keep an eye out for her car and the dog.

The posts were shared in community groups and across different platforms.

Olson walked around the St. Boniface neighbourhood pressing buttons on her vehicle key fob, hoping it was close enough for the car to pick up. She called animal services daily.

“I was really starting to lose hope after five days, and it was getting colder,” she said.

The day the car was stolen, Valerie Peers saw a Facebook post about Oswald potentially being on the loose in her neighbourhood, so she knew to keep an eye out for him.

That weekend, she noticed a few cars parked on a nearby street that had been plowed around after the snowfall. By Tuesday, only one remained: a blue Honda CRV.

She took note of the vehicle’s licence plate and cross-referenced it with the social media posts.

When he flashed [the light] in the front seat … two brown eyes were looking back at him.– Valerie Peers

She called the police and then headed out for the evening with her husband. The couple stopped at the abandoned car on their way.

Her husband cleared some snow off the car and used the flashlight on his phone to look inside.

“He couldn’t see anything in the back seat, but when he flashed [the light] in the front seat … two brown eyes were looking back at him,” Peers said.

Oswald had been in the car, alone, for five days.

A photo of Oswald moments after he was freed from the abandoned stolen car he spent five days in, alone. (Submitted by Valerie Peers)

Minutes after Peers and her husband called the police non-emergency line, officers showed up and broke a window.

They put Oswald on a leash, but before he could be reunited with his owner, he had to take care of business.

“I’m going to say he had the world’s longest pee when he got out of the car because he is that good of a dog,” Peers said, laughing.

The kismet of Oswald’s rescue didn’t stop with what Peers calls her “spidey sense” — Olson happened to be a few blocks away at the hospital when he was found.

Within minutes of being freed from the car, he was reunited with his owner, who was quickly losing hope of seeing him again.

Winnipeg Police Service public information officer Const. Dani McKinnon told CBC that the property crimes unit is investigating the theft, and wants to remind drivers that even though it’s getting colder, keeping an unattended car running is risky.

A lesson to ‘live in the moment’

Olson says she’s overwhelmed by the support she received from Winnipeggers and beyond, after she got reports of potential sightings from other provinces and countries.

“It was amazing to know that there’s a network of people watching out in their community and willing to help,” she said. 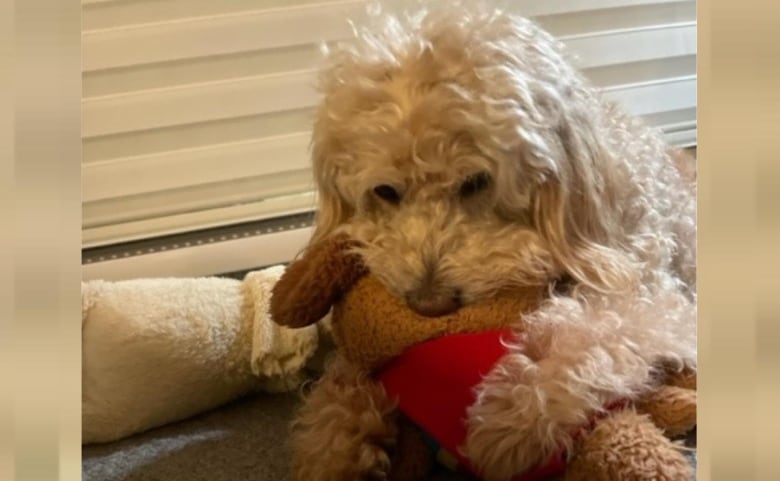 Oswald safe at home after a harrowing five days spent alone in his owner’s car that had been stolen from the St. Boniface Hospital in Winnipeg. (Submitted by Tanis Olson)

Her priority now is getting the pup, who she says is a strict rule follower, back into his familiar routine. Oswald is in good health and was not physically harmed.

“The minute he came out of the vet, he literally rolled and slid around in the snow as if nothing was wrong, and I took a cue from that. We could all learn such resiliency and live in the moment.”