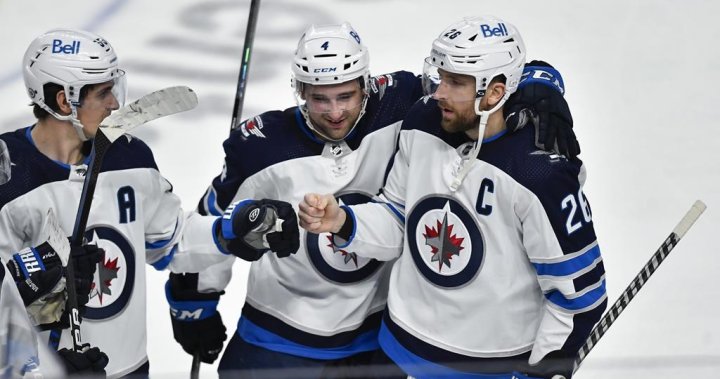 The Winnipeg Jets will have three players wearing the “A” as alternate captains this season.

Morrissey and Scheifele were also alternate captains last season. Bowness, however, wants all of his veterans to lead, not just this trio.

“We do not need a leadership group,” said Bowness. “That room is in a very good place right now. We don’t need to name a leadership group. The league mandates you wear three A’s. We could give that to a lot of guys in there.

The Jets kick off the new season on Friday with their home opener against the New York Rangers. They made one last roster move ahead of the season opener by placing forward Dominic Toninato on waivers for the purpose of sending him down to the AHL’s Manitoba Moose to get the Jets down to a 23-man roster.

“It’s a very tough call cause Dom was very well respected by everyone in the organization,” Bowness said. “It’s not like he’s not one of those guys that played himself off the team, he didn’t. We just needed the roster spot for that eighth D.

And Logan Stanley has won the sixth defenceman job for now over Dylan Samberg and Kyle Capobianco.

“He was very physical, which we like, him using his size,” said Bowness. “And he was doing a good job on the penalty kill. We’re very happy with Dylan Samberg, very happy with Capo, and that’s why they’re still here.

“They’re going to play. Everyone here is going to play, but going into tomorrow, right now, Logan has a little bit of a lead on them.”

ANALYSIS: Jets, fans looking to start season with a win

The newest Jet arrived on Thursday with forward Axel Jonsson-Fjallby joining his new teammates after being claimed off waivers from the Washington Capitals.

He’s only played 23 NHL games, but said getting claimed by a new team is a big confidence booster.

“I was super excited when I got the news right after the deadline,” said Jonsson-Fjallby. “Getting claimed — I feel I was playing last year too, and just happy cause that means the team believes in you.”

“I was super excited. Getting claimed, it means the team believes in you.”

Hear from AJF, PLD, and much more ahead of tomorrow’s Home Opener!

Jonsson-Fjallby won’t play on Friday, but is expected to make his Jets debut on Monday against the Dallas Stars.