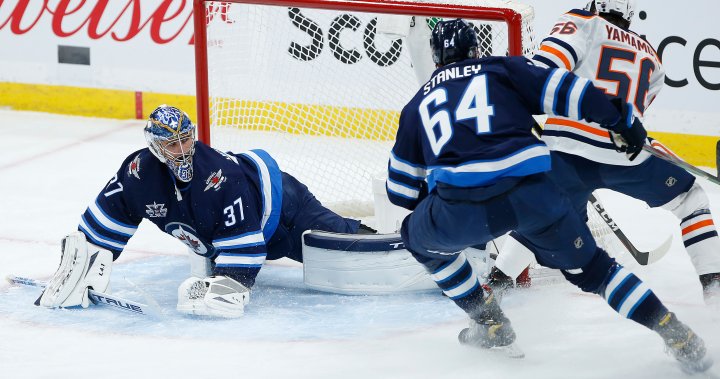 And then there were seven. That is the number of Winnipeg Jets in NHL COVID Protocol following Tuesday’s announcement that defensemen Logan Stanley, Nathan Beaulieu, Ville Heinola, and forward Kristian Reichel were joining Nikolaj Ehlers. They were added to the list on Monday. Jansen Harkins and Dylan DeMelo were left behind in Denver late last week.

The absentee chart also includes injured forwards Blake Wheeler, David Gustafsson and Kristian Vesalainen, who is day-to-day according to the team. But Paul Stastny returned to practice on Tuesday after missing last Thursday’s 7-1 loss to Colorado because of a lower-body injury that flared up.

The end result was a practice group of 10 forwards, 5 defensemen, and goalies Connor Hellebuyck and Eric Comrie. Who knows what tomorrow might bring? But Jets Interim Head Coach Dave Lowry sounded hopeful there will be a full compliment of 18 skaters for the team’s next game, Thursday in Detroit.

“Dylan DeMelo is still in quarantine in Denver. Jansen Harkins has exited and is now available to come out of quarantine, but is still in protocol,” said Lowry, adding Harkins was making the trip from Denver to Detroit on Tuesday, with the idea he’d return to action on Thursday against the Red Wings.

There is, of course, the uncertainty of who will test positive next, and what tinkering will be required over the next 48 hours.

“We’re not the only team that has dealt with this. You talk to your peers. All you have to do is you put together a lineup with the players who are available,” said Lowry. “That’s all you can control and that’s all you can worry about. We knew the situation that at some point in time that we were going to be affected by it. We’ve been fortunate that it’s taken this long to get into our locker room.”

Connor Hellebuyck tested positive for COVID last summer, prior to being vaccinated.  And since the season began, Blake Wheeler, Mark Scheifele, Andrew Copp, and Kristian Vesalainen have spent time in COVID Protocol. So that brings the number to ten players who were on the season opening roster and have contracted some form of the virus.

“It was inevitable it was going to happen,” said Paul Stastny after Tuesday’s practice. “Every guy who’s had it is fine. Whether in Colorado or here, so that’s good. I think every team’s been going through it and you almost hope everyone kinda gets it out of the way now, instead of lingering throughout the year.”

The current COVID situation for the Jets will likely result in the NHL debut of Dylan Samberg, who was one of the 5 rearguards at Tuesday’s practice. “He’s played extremely well and he’s a big body that moves and gets around the ice really well,” said Lowry when asked about Samberg’s status for Thursday. “Obviously with players entering protocol, he right now is one of our five defensemen readily available.”

Samberg was supposed to dress for five of the Jets six preseason games, but then injured his ankle on day one of training camp. So this opportunity for Winnipeg’s highly regarded second round pick in the 2017 NHL entry draft could take away lot of the sting from the earlier disappointment,

“It has been a crazy last few days — from playing in Texas to not getting a lot of sleep and getting on the next plane in the morning back to Winnipeg,” said the soon to be 23-year-old from Hermantown, Minnesota, who had 0-5-5 and was a +6 in 16 games with the Moose. “It was a long first half of the year with the injury. I felt I came back strong after Christmas, and I feel good right now.”

The Jets are 16-11-5 and sitting in 5th place in the Central Division, but are currently only three points behind Calgary for the number two Wild Card berth in the NHL Western Conference. Stastny predicts that will only ramp up the intensity once there is clarity on when all the postponed games are re-scheduled.

“The Western Conference, every team seems to win or get points and you realize how important it is and that makes it more fun,” said the veteran forward who knows a thing or two about handling the heat in the home stretch of a season. “I think in the past, I’ve been in playoff races when halfway through the year you kinda knew who was going to get in and who wasn’t … This year, besides one or two teams in the west, everyone’s still alive.”