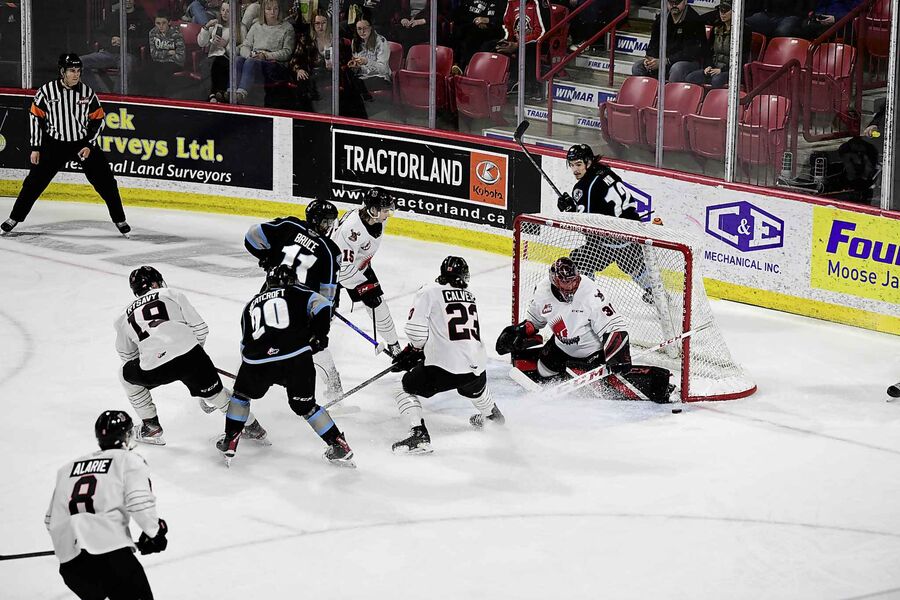 Winnipegger Eric Alarie scored the go-ahead goal at 3:12 of the third period and Brandonite Calder Anderson potted the game-winner at 9:42 to lift the Moose Jaw Warriors to a 3-2 victory over the Winnipeg Ice in WHL playoff action at Moose Jaw’s Mosaic Place Tuesday night.

The Warriors, who host Game 4 in the best-of-seven Eastern Conference final Wednesday, were outscored 13-1 in two losses to opening the series.

“It was a good game and I thought they played well,” said Ice head coach James Patrick. “You knew they were going to bounce back, they’re going to be a lot tougher in their building. Every game we played here this year has been a one-goal game.”

The result also forces the series back to Wayne Fleming Arena for Game 5 Friday at 7 p.m.

Jack Finley added some intrigue with 62 seconds left in the game when he tipped Connor McClennon’s point shot past Moose Jaw goaltender Jackson Unger. It was his fifth goal of the playoffs.

Unger got his first career post-season start and he stopped 38 shots en route to the victory.

“We had our chances. They had their chances (but) I think we turned over a lot of pucks tonight and that’s something we haven’t been doing throughout the series,” said McClennon. “Obviously we’re going to try and clean that up (in Game 4). We’re still up in the series, we have to keep our heads high and not get frustrated. We want to be a better team tomorrow.”

Winnipeg, which had opened scoring on McClennon’s goal 11 seconds into Game 1 and Finley’s goal 2:49 into Game 2, were off to a quick start again in Game 3 when Zach Benson ripped a power-play goal past Moose Jaw starter Jackson Unger 3:37 into the first period.

The Warriors got a big lift in the second period when they killed off a five-minute charging major to Robert Baco. Baco’s hit leveled overage Ice forward Jakin Smallwood.

Moments after the five-minute power play expired, Moose Jaw’s Jagger Firkus converted a 2-on-1 break to score his fourth of the post-season and tie the game 1-1.

Smallwood was helped off the ice and did not return to action. His status for Game 4 was unknown.

“He’s been one of our best players in both series,” said Patrick. “We use him in all situations and he leads the way with his work ethic. So, losing him for almost two periods — you’re gonna feel that.”

The winner of the Moose Jaw-Winnipeg series will advance to the Eastern Conference final against the winner of the other semifinal between the Edmonton Oil Kings and Red Deer Rebels.

Edmonton has a 3-0 lead and can wrap up the series with a win in Game 4 in Red Deer Wednesday night.