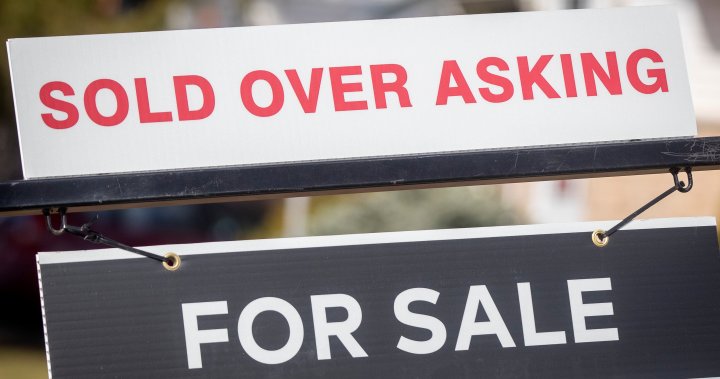 The increase is the largest gain recorded in Winnipeg since the company began tracking aggregate prices over a decade ago, according to Michael Froese, a broker and manager with Royal LePage.

And Royal LePage is forecasting prices to continue climbing in Manitoba this year despite the federal government’s efforts to cool the market.

“There really isn’t too many locations that aren’t seeing the gains,” Froese told 680 CJOB’s The Start Tuesday.

Broken out by housing type, he said the average price of a single-family detached home increased 11.4 per cent to $425,600, while the median price of a condominium jumped 8.4 per cent to $243,900 during the same period.

Froese said Winnipeg and much of rural Manitoba, including cottage country, is experiencing a shortage of inventory, which he said is putting an upward pressure on prices.

Home prices could rise 15% in 2022 despite efforts to cool market: Royal LePage

That, combined with an expected surge in sales as homebuyers feel the pressure to make a purchase before interest rates go up further, has led Royal LePage to raise its full-year forecast for home prices in Winnipeg this year.

The company is now forecasting that the aggregate price of a home in Winnipeg will increase eight per cent in the fourth quarter of 2022, compared to the same quarter last year.

The revised price predictions come amid renewed efforts to take some steam out of Canada’s housing market.

The Bank of Canada began hiking interest rates last month, raising its benchmark rate a total of 75 basis points since March 2. The new overnight rate of 1.0 per cent is aimed at making the cost of borrowing more expensive for Canadians, discouraging spending in an attempt to dampen rampant inflation.

Rates for five-year fixed-rate mortgages have also risen in recent weeks as the yields of five-year government of Canada bonds have climbed higher.

Froese said the measures are unlikely to have a major impact in 2022, especially in the short term.

“Most buyers right now have pre-approvals or are pre-qualified and they actually have rate holds for up to 90 to 120 days,” he said.

“It actually creates an opposite effect where you actually have a deadline to buy a house or else your rate is going to go up.”

But some experts say there should at least be some “moderation” in real estate activity nationally heading into 2023.

The Canadian Real Estate Association (CREA) said Tuesday that while March saw fewer overall sales across the national housing market than last year’s all-time record for the same month, average prices were up 11.2 per cent year-over-year to $796,068.

Robert Kavcic, senior economist with BMO, said in a note to clients on Tuesday that March’s year-over-year decline in sales volume “might be the first in a longer series of softening trends.”

Winnipeg’s booming housing market could be here to stay: broker

“The coming months, especially through the second half of this year when higher mortgage rates really start to bite, could start to show outright declines,” he wrote.

According to Royal Lepage’s report Winnipeg set a new record last month with 67 per cent of homes selling over the list price.

— with files from Craig Lord and The Canadian Press