Winnipeg has a brand new titleholder for tallest constructing

For the first time in three decades, Winnipeg’s skyline has a new No. 1.

A soaring skyscraper at 300 Main St., one block from the famed intersection of Portage and Main, helped the city reach a new peak on Friday as the concrete was poured for the 41st floor.

That puts it at just over 128 metres, which edges out the office tower at 201 Portage Ave. That one, the former TD Centre, had been the tallest building in the city since it opened in 1990.

And 300 Main isn’t done yet. It’s still under construction with live camera updates every hour.

Once completed later this year, it will be a 42-storey residential and retail pillar soaring 142 metres above the pavement, anchoring the south end of Winnipeg Square.

The north end, at 360 Main, features a 30-storey highrise built in 1979. The south tower was originally supposed to be built around the same time but never materialized … until now.

It looks like the core of 360 Main Street is at the 41st floor, which would put it over 420’ tall and make it officially the new tallest building in Winnipeg!

It will eventually be 465’ tall, 45’ taller than runner up, 201 Portage (former TD Building) pic.twitter.com/z5leK2uSQt

The plan for the $165-million south tower was first unveiled in April 2016 by Artis REIT, a commercial real estate investment trust that owns Winnipeg Square and 360 Main, among several other properties in the area.

The upper floors of the building will be residential — 400 apartments — with the lower portion set aside for retail and office space.

That will account for 40 floors. The final two are reserved for mechanical needs.

Artis REIT declined to talk about the building, preferring to wait until it is completed. And no one from Marwest, the general contractor on the project, responded to requests for an interview.

A drawing shows the original plan for Winnipeg Square at the corner of Portage Avenue and Main Street in the late 1970s. The structure on the left, at the south end of the development, was never built. It is where 300 Main is now nearing completion. (Courtesy of Winnipeg Architecture Foundation)

But Winnipeg’s Downtown BIZ (Business Improvement Zone) lauded the project as a key component in revitalizing the city’s core.

“Our downtown is more vibrant when people are here 24/7, and we’re not just looking at the nine-to-five crowd. So adding those residential units will really be critical for adding to that vibrancy,” said BIZ spokesperson Pamela Hardman.

The downtown has gone through a rough patch, with the closure of The Bay’s flagship store at Portage and Memorial Boulevard, as well as Staples, a key anchor tenant in Portage Place shopping centre.

The future of Portage Place in its entirety, really, is up in the air.

A deal with Toronto’s Starlight Investments to purchase and redevelop the mall has proven elusive.

Kate Fenske, CEO of the Downtown BIZ, told city council recently that COVID-19 and the related restrictions to manage its spread have led to at least 37 downtown businesses being closed for good.

Despite that, there is still much optimism and 300 Main has become a springboard for it.

“There are capital projects in around the estimated area of about $1 billion happening, so we know that people are seeing that it’s important to invest in downtown.

From mudhole to modern

The addition of 300 Main means one of the city’s most famous skyscrapers has been bumped into third spot.

The Richardson Building at Portage and Main, built in 1969, was for many Winnipeggers a symbol that the city was meeting the modern age — a 34-storey sentinel at the eastern edge of Portage, a looming landmark of progress.

Construction innovations used in major North American cities but new to Winnipeg were used to build it, the Winnipeg Architecture Foundation says. It was the city’s first highrise to reach above 30 storeys.

But it wasn’t the city’s first skyscraper. And not the first to be celebrated as a symbol of advancement.

That honour belongs to the Union Bank Tower at the corner of Main and William Avenue, built in 1903. 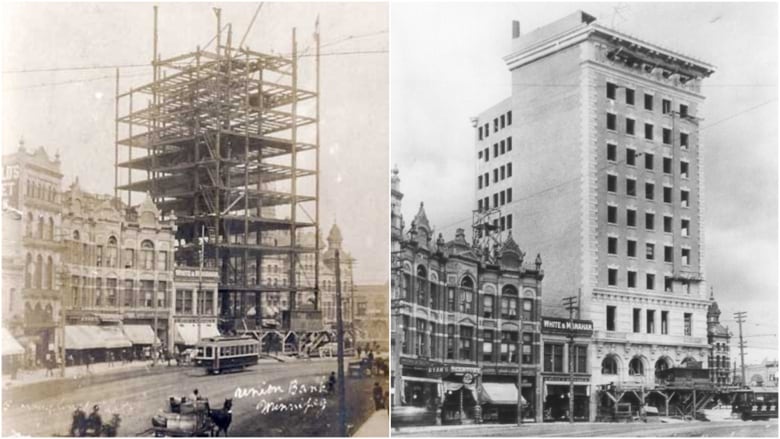 The Union Bank Tower as seen under construction in 1903, left, and completed in 1904. (Archives of Manitoba)

Reaching 48 metres into the sky on a steel frame rather than wood, it had early ‘Peggers and their newspaper gawking.

“When Winnipeg was a mudhole, and the houses stood on stilts, we didn’t calculate that in 1903 they’d be sinking caissons to bedrock to get safe footing for skyscrapers,” a Winnipeg Tribune story trumpeted, amazed that a building could hit 10 storeys, besting the Merchants Bank Building, which opened with eight storeys the year prior at the location where the Richardson Building now stands.

The Union Bank Tower, which is still standing, boasted the largest and fastest elevator in Western Canada and was also considered the first skyscraper west of Toronto.

At the time of its opening, the top floor was the second highest in the entire British Empire, just one metre below London’s tallest building.

Now it doesn’t even rank in the city’s top 35 tallest structures, surpassed by hotels, apartment and office buildings and even museums.

By the 1990s, the pendulum of prosperity on the building had swung the other way. The Royal Bank (which had swallowed the Union Bank in 1925) moved to a new location in 1992. In 1995, the city seized the property for unpaid taxes.

The building sat vacant for 18 years before being renovated and reopened in 2013 as Red River College’s Paterson GlobalFoods Institute.

Winnipeg’s skyline has a new No. 1

Winnipeg has a new titleholder for tallest building. A soaring skyscraper at 300 Main St., one block from the famed intersection of Portage and Main, helped the city reach a new peak on Friday as the concrete was poured for the 41st floor.