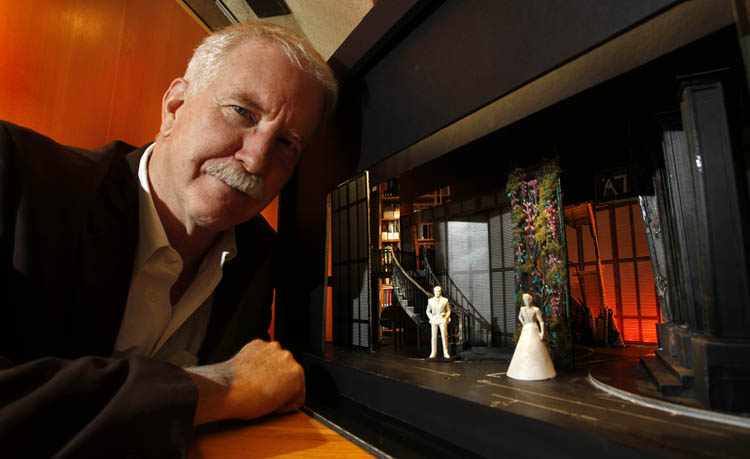 John Lee Beatty was sitting in a Times Square coffee shop two years ago when Steven Schipper handed the Broadway set designer a script that he took one look at and politely asked if he could immediately scratch out the title.

“He didn’t want to feel the pressure of that iconic title,” recalls Schipper, artistic director of the Royal Manitoba Theatre Centre. “He comes from the south and felt intimidated by that title.”

That title was Gone With the Wind.

Wayne Glowacki / Winnipeg Free Press
Broadway set designer John Lee Beatty with a model of the set he designed for the Manitoba Theatre Centre’s play Gone With The Wind.

Schipper wanted the Tony Award-winning Beatty (which rhymes with Katie) to read Niki Landau’s new drama about the manipulative Southern belle Scarlett O’Hara and hopefully become part of the artistic team that would develop Gone With the Wind for the RMTC premiere in January 2013.

Beatty, in Winnipeg this week for production meetings, remembers when the Gone With the Wind project was first pitched to him, and his initial trepidation. He is named, like his Tennessee-bred father, after Robert E. Lee, the southern general who led the Confederacy during the American Civil War. His father’s family could not utter the N word: northern.

“Many of the people I talked to thought Gone With the Wind was a very dangerous thing to approach which, of course, made it all the more attractive to me,” the white-haired Beatty says. “It’s so difficult to put on stage that I thought it would be an interesting intellectual exercise as a designer.”

He was well aware that the previous attempts to bring Margaret Mitchell’s classic novel to the stage appeared to be cursed. A 2008 musical adaptation directed by Trevor Nunn in London flopped quickly. Another version called Scarlett was headed to Broadway in the ’70s but didn’t survive the lethal reviews. The only one to ever get it right was TV’s Carol Burnett Show which did a hilarious parody that still can be accessed on YouTube.

“Part of the appeal of doing this is that I wanted to see a production, too,” says Beatty, who read Gone With the Wind when he was 15.

What he has come up with are two sections of the stage that revolve for dual storylines, along with shutters as the dominant image.

“My basic thought was to keep it moving,” says the Yale School of Drama graduate. “In a way, I’m creating a machinery for the delivery of the story. The book is a page-turner and the show has to be a page-turner in terms of speed. To keep it chugging is quite a challenge.”

The 64-year-old New Yorker has his pick of projects and has designed such Broadway hits as Proof, Footloose, Chicago, Rabbit Hole, The Color Purple, Crimes of the Heart and The Heiress. On Thursday night Beatty opened his 100th Broadway show, a revival of An Enemy of the People at the Manhattan Theatre Club. Earlier this year he collected his 14th Tony nomination for his design of Other Desert Cities. He has won two Tonys for Twentieth Century and Talley’s Folly.

This is Beatty’s second time at RMTC and longtime patrons might remember his fantastic tree-filled set for Proposals in 1999. He was always open to returning here, despite his busy schedule.

That’s despite freezing a V into his exposed forehead, the result of walking outside too long during an especially frigid winter day during the Proposals rehearsals.

“For some bizarre reason — I shouldn’t say that — I loved Winnipeg the moment I got here, so I have always wanted to come back,” says Beatty, whose Canadian experience has come from working at the Stratford Festival. “And I was here in January when I accidentally burned my face because it was so cold. I looked like I was in a cult because of the red triangle on my forehead.”

Beatty decided that his life’s work would be in set design very early after seeing a Broadway-bound production of Peter Pan when he was seven years old in Los Angeles. He went home intent on flying and becoming a set designer. He has been semi-successful in attaining his boyhood dreams. A love of theatre has been a constant attraction.

“It’s the mystery of theatre, because you don’t know which shows might succeed or fail, or the twists and turns projects might take, the curious accidents of theatre life.”

One of the recent twists is his new sideline designing high-end restaurants in New York City. His seventh — called 54 Below — opened with a big splash in June. It’s located in the basement under the one-time notorious Studio 54 and has quickly become a swanky sandbox for Broadway stars.

Designing restaurants is not unlike designing stage productions, he says. The owner is like a producer and the chef is the star of the show. One of his personal requirements is that the owner provide a backstory about the space.

“Don’t tell me to make it pretty, because I don’t know what to do,” says Beatty, who came up with a 1920s speakeasy decor for 54 Below. “I’m a theatre designer, so I can’t do without motivation.”

John Lee Beatty has seen at least 100 Broadway shows — because he designed the sets for them — but surprisingly not very many more.

When he’s seated in the audience watching a production he’s more attentive to the decor than the plot. It’s a professional hazard. For him it’s not whodunnit, it’s how the technical staff made that prop appear or disappear. Some piece of scenery moves across the stage and up pops the cost in Beatty’s mind.

“My critical eye is always on,” he says. “I see the skeleton more than I see the body (of the play).”