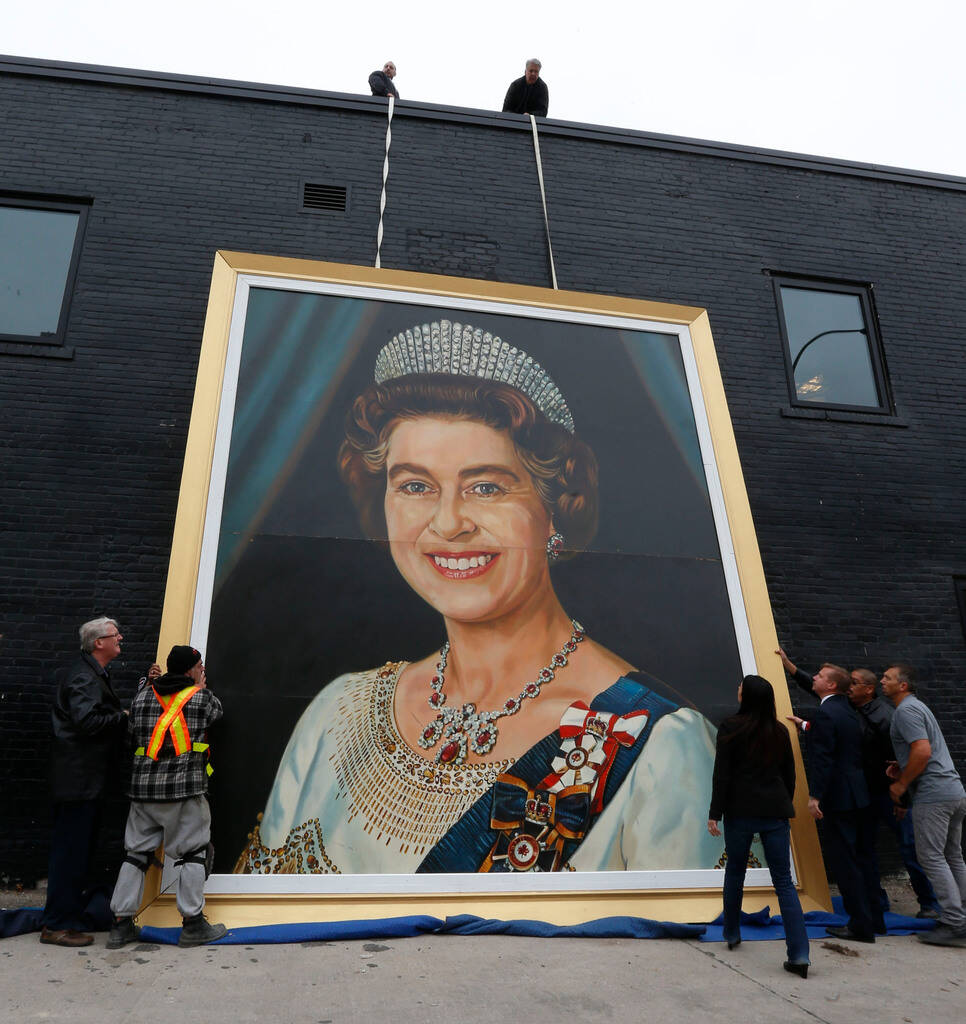 The enormous painting of Queen Elizabeth that watched over NHL games from the rafters of the old Winnipeg Arena for two decades will be displayed for public viewing in the coming weeks.

Ron J. D’Errico, owner of the five-by-seven-metre portrait (who said he acquired it as a gift), plans to hang it by the end of the month in the new Transcona hangar offices of his firm, Impact Security Group.

However, D’Errico noted Thursday, he had already planned to display the massive depiction (currently in storage) prior to the Queen’s death at 96.

The painting of Queen Elizabeth II from the old Winnipeg Arena was displayed outside of the Pint on Garry Street prior to the Heritage Classic hockey games in 2016. (Wayne Glowacki / Winnipeg Free Press files)

“I actually had… already started the process of permanently putting her inside the hangar of our office (1225 Plessis Rd., Unit A), and she’ll look amazing on the wall,” he said in a phone interview.

“I plan on having an open house for the community, where they can come by and pay their respects to her.”

D’Errico said he had previously been in talks with area Coun. Shawn Nason about hosting an open house for the company’s new offices to introduce the firm to the neighbourhood — including a display of the royal image that serves as an emblem of the Winnipeg Jets 1.0 in the minds of many local hockey fans.

“It’s a terrible day for history… it’s tragic,” he said of the Queen’s death Thursday. “The Royal Family, it’s part of our heritage, to recognize that bond Canada has with England.”

The portrait is also a memory of simpler times, D’Errico said.

“For me, it’s not so much that I’m a loyalist, it’s more of the symbol of what (the painting) means to the people of Winnipeg… good memories, concerts, events, fathers and sons going to hockey games,” he said.

“When they’d look up, they’d see the Queen in the rafters looking upon them smiling — it was a sense of comfortability, safety.”

The Jets were sold and moved to Arizona in 1996.

The portrait has mostly been kept from public view since it was taken down in 1999 in preparation for the Pan American Games. It was cut into two pieces before being put into storage in a warehouse in Whitby, Ont., in 2002. The Winnipeg Arena closed in 2004 and was demolished in 2006.

In 2015, CN Rail executive Jamie Boychuk bought the portrait for a sum never publicly disclosed with the intent of returning it to Winnipeg. It was in great condition, excluding the odd mark put on it by NHL players who used to shoot pucks at it from centre ice, the Free Press reported at the time.

“I will never sell that portrait of the Queen for monetary value, I will only pass it onto to people who will curate and care for it for the people of Winnipeg,” D’Errico said, adding he has made provisions for the portrait in his estate planning.

“It belongs to the people of Winnipeg.”

The portrait of the Queen made its last major public appearance outside a downtown pub in 2016 to mark the NHL Heritage Classic game in Winnipeg.

D’Errico said he would gladly gift the beaming portrait to Jets (and Canada Life Centre) owner True North Sports and Entertainment Ltd., but there was no interest. (TNSE purchased and relocated the former Atlanta Thrashers in 2011.)

“They just want to remove themselves from that era. They want to create their own legacy, which I respect.”

Erik Pindera reports for the city desk, with a particular focus on crime and justice.

Winnipeg brewery altering label out of respect for MMIWG disaster