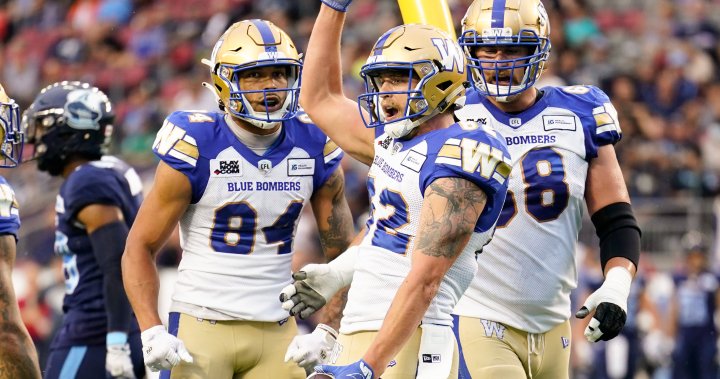 In a game that looked like a rout early, but became a nail-biter at the end, the Winnipeg Blue Bombers held on to beat the Toronto Argonauts Monday and remained undefeated on the season.

After taking a 17-0 lead early in the second quarter, the Bombers let the Argos back into the game, and after a late fourth-quarter touchdown cut the lead to one, Argos kicker Boris Bede missed the extra point, allowing the Bombers to escape with a 23-22 win.

Just like they did in two games against Ottawa earlier this season, the Bombers defence gave up a ton of yards (426), but kept the damage on the scoreboard down.

For the second straight game, the Bombers defence recorded a pick-six as Winston Rose snagged a Bethel-Thompson pass and returned it 46 yards for a touchdown.

Later in the quarter, the Argos QB threw his second interception of the opening frame as Nick Taylor of the Bombers joined the interception party. The offence took advantage as Zach Collaros found Drew Wolitarsky for a 15-yard touchdown and the converted extra point made it 14-0.

Before the first 15 minutes expired, Collaros found Dalton Schoen for a 35-yard reception, setting up Marc Liegghio for a 15-yard chip shot field goal early in the second quarter to make it 17-0.

The Bombers would pick up their third turnover of the game with just under 10 minutes to play in the quarter as Andrew Harris was stuffed on a third-and-one carry from the Winnipeg 25.

Toronto would get on the board before the quarter ended as Boris Bede blasted a 52-yard field-goal through the uprights with 1:06 remaining after an Adam Bighill sack put an abrupt end to a Toronto drive.

The Bombers looked to add points before the first half ended moving into field goal range, but Collaros was picked off by Jamal Peters after lobbing one into the endzone.

Toronto continued to chip away at the lead just over a minute into the third quarter as Bethel-Thompson found Brandon Banks in the endzone for a 45-yard touchdown. The throw initially looked like it had been picked off by Bombers DB Demerio Houston as the two fought for it at the goal-line, but it ended up slipping into the hands of Banks.

A promising drive by the Argos later in the quarter that got to the Winnipeg 10, was thwarted after a Bethel-Thompson pass went through the hands of Banks and into the hands of Bombers DB Malcolm Thompson, who ended up lateraling it to Taylor who took it all the way to the Winnipeg 49-yard line.

The Bombers drove it into field-goal range and on the first play of the fourth quarter, Liegghio hit a 20-yard field goal to put the Bombers ahead by two scores.

Toronto continued to move the ball, however, and cut the lead to 20-13 as Bede hit a 42-yard field goal with under 11 minutes to play after a Jake Thomas sack put an end to the drive.

The two teams then exchanged field goals and the Argos got the ball down 23-16 with less than two minutes to play. Another drive down the field ended in a four-yard touchdown pass from Bethel-Thompson to Markeith Ambles, but Bede’s leg betrayed him on the extra point attempt.

On an injury note, Bombers linebacker Kyrie Wilson left the game and did not return.

Despite not finding the endzone, Harris had a great first game against his old club, recording 111 yards on 22 carries.

Next up for the Bombers is a battle with the 3-0 B.C. Lions on Saturday in Vancouver. The pregame show begins at 4 p.m. on 680 CJOB with kickoff shortly after 6 p.m.