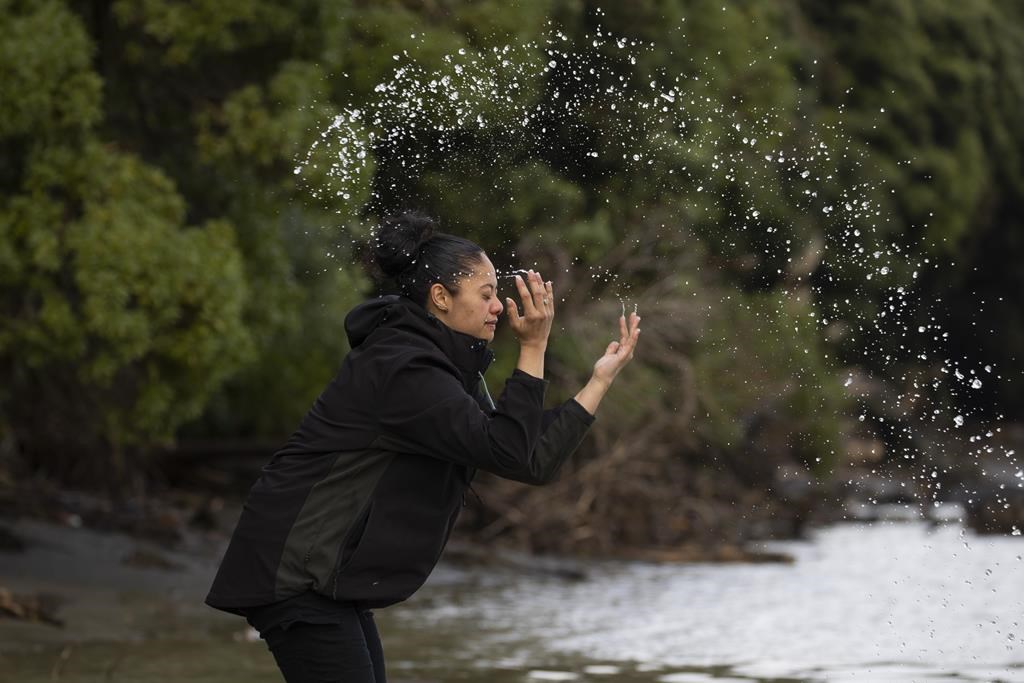 WHANGANUI, New Zealand (AP) — Five years ago, the Whanganui River was recognized as a living person in a groundbreaking New Zealand law. For many who live along its banks, the official recognition validated the deep spiritual connection they feel with the river. They continue to feel the draw of its waters each day, whether it’s to fish, canoe or refresh their lives.

Ngahuia Twomey-Waitai, 28, walks into the Whanganui River and reaches down to splash water over her head in an action reminiscent of a baptism. She says the river has been a big part of her life since she was born.Ngahuia Twomey-Waitai, 28, reaches into New Zealand’s Whanganui River to ritually splash water on herself on June 17, 2022. “I tend to come down here quite often to cleanse myself, especially when I’m going through some big, huge changes in my life, regardless of them being good or bad,” she says. “The river always makes things better for me.” “Just being down here gives me a huge smile and brings me at peace with myself and my life.” (AP Photo/Brett Phibbs)

“I tend to come down here quite often to cleanse myself, especially when I’m going through some big, huge changes in my life, regardless of them being good or bad,” she says. “The river always makes things better for me.”

“Just being down here gives me a huge smile and brings me at peace with myself and my life.”

Glenn Martin grew up in the little village of Piriaka and still lives there. These days he runs a business called Blazing Paddles, renting canoes to tourists.

The river is navigable for most — it’s grade one or two along this section. Martin’s customers paddle downstream and typically camp or stay in huts for one to five nights before he tows the canoes back by road.

“When you’re down here on the river, it just takes you to another place,” he says. “It’s relaxing. It’s soothing. It’s reinvigorating.”

Martin, 65, loves all the activities the river has to offer, especially the world-class trout fishing, and approves of it gaining personhood.

“I think people take more pride in it and definitely look after it a lot better because it’s just got that much more respect,” he says.

Fantail birds tumble about Aunty Sugar’s feet as she walks across the small Māori marae, or meeting grounds, that she runs on the banks of the river in the town of Koriniti.

The 73-year-old’s real name is Jula Teki but locals know her as Aunty Sugar.

“They call us the river rats. And we are the river people, the people of the river,” she says. “When the river is flowing good, everything is okay. When it’s flooded, we just all hunker down and we know how the river’s going to react. The road’s probably going to close down, but that doesn’t mean anything to us.”

She says all the power schemes and farms along the banks have effectively turned the river upside-down. She says the river gaining personhood would make her ancestors proud.

Geoff Hipango says it’s going to take time — perhaps a generation or more — for the river’s health to be fully restored but it’s now on the right track.

Hipango, 55, grew up at the Te Ao Hou marae on the banks of the river in Whanganui. These days, he manages mental health and addiction services for a tribal provider.

He says the river’s status is a win not only for his tribe but for the wider community, which also want to see its health improved for future generations.

He says it has been a privilege to see the river gain personhood after all the hard work of his elders, who never surrendered their beliefs.

“Really it was only embodying what our people have always acknowledged and lived by,” he says. “It’s just that the law caught up.”

Associated Press religion coverage receives support through the AP’s collaboration with The Conversation US, with funding from Lilly Endowment Inc. The AP is solely responsible for this content.