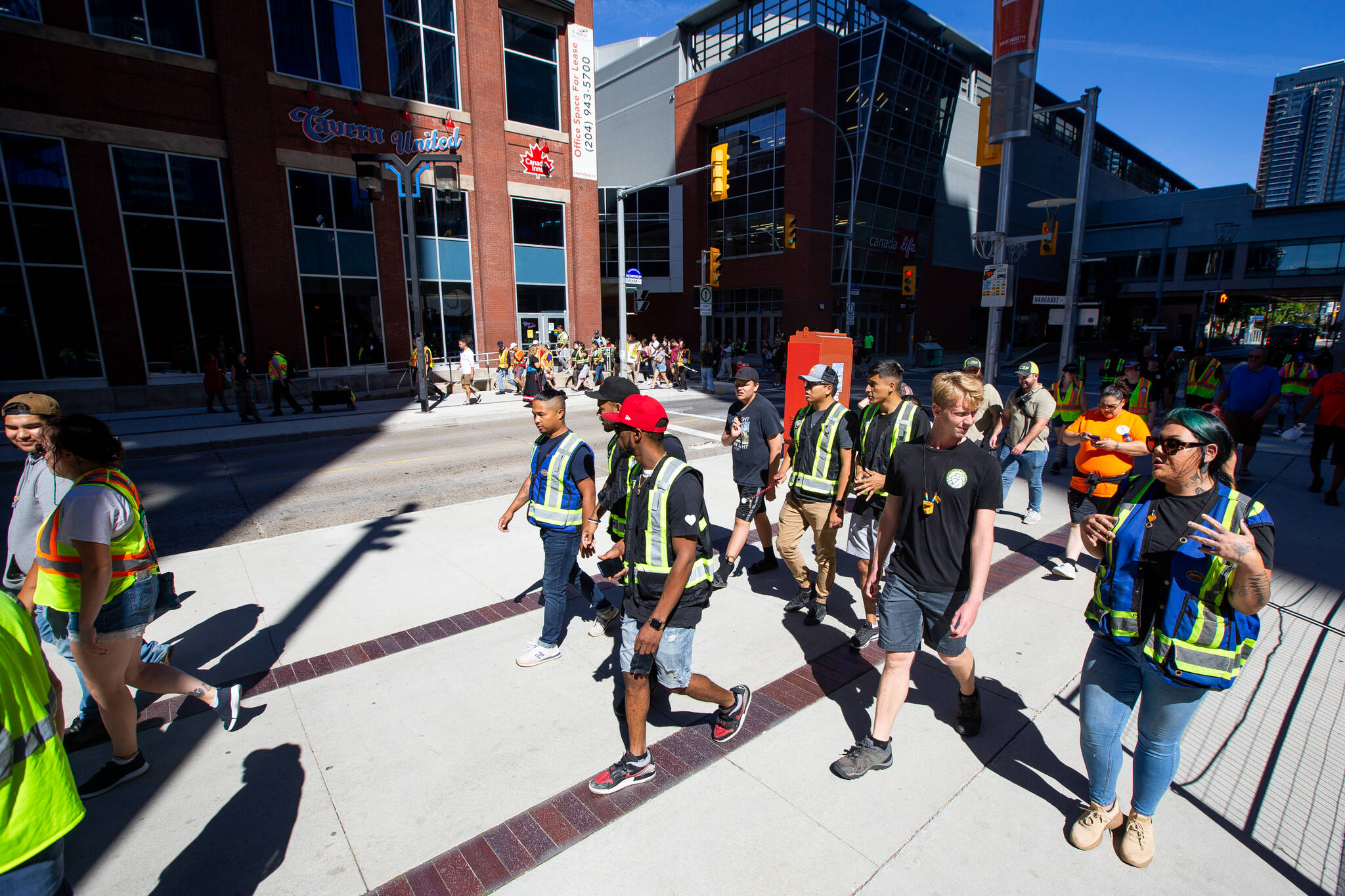 They came wearing different uniforms but were united by a common goal.

On Saturday afternoon, members of several community foot patrols across the city came together in True North Square to connect, collaborate and share visions on how to move forward.

Frontline community organizations representing many of the core neighbourhoods in Winnipeg come together Saturday afternoon for a walk through downtown. (Daniel Crump / Winnipeg Free Press)

“It’s been a couple of months in the making,” Normand said. “Kevin Walker, our interim director reached out to all the different groups within our city to come together in unity because we’re all doing the same work.”

The Unity Walk took place just over a week after a string of violence in Point Douglas neighbourhood shook the community.

On Aug. 22, Winnipeg police responded to a homicide and three assaults near Main St. that they believed were connected. The homicide involved the death of Danielle Dawn Ballantyne, 36, who was found dead inside an apartment on the 100 block of Jarvis Avenue.

In an article published in the Free Press on Aug. 24, Sel Burrows, the co-ordinator of the Point Powerline crime prevention group said that it appeared that the victims were unhoused or in precarious housing situations.

The uptick in violent events hit closer to home for Normand, whose sister-in-law’s cousin, Mackaylah Gerard-Roussin was identified as the victim of a homicide in Steinbach last week.

“I was just at the vigil yesterday,” she said. “It’s all stemming from drugs. The amount of drugs that we see on the streets and people that are under the influence has drastically grown.”

People like Sam Lavallee, who volunteers with a group called Thunderbirdz, say they are witnessing the harsh impacts of poverty firsthand on their team walks — an issue Lavallee believes is contributing to growing violence in the city.

“Housing is clearly an issue here in the city,” Lavallee said. “There’s not a lot of support for those people with our society, or with our colonial society, I should say. We just need more people to step up and try to find resources for these people.” 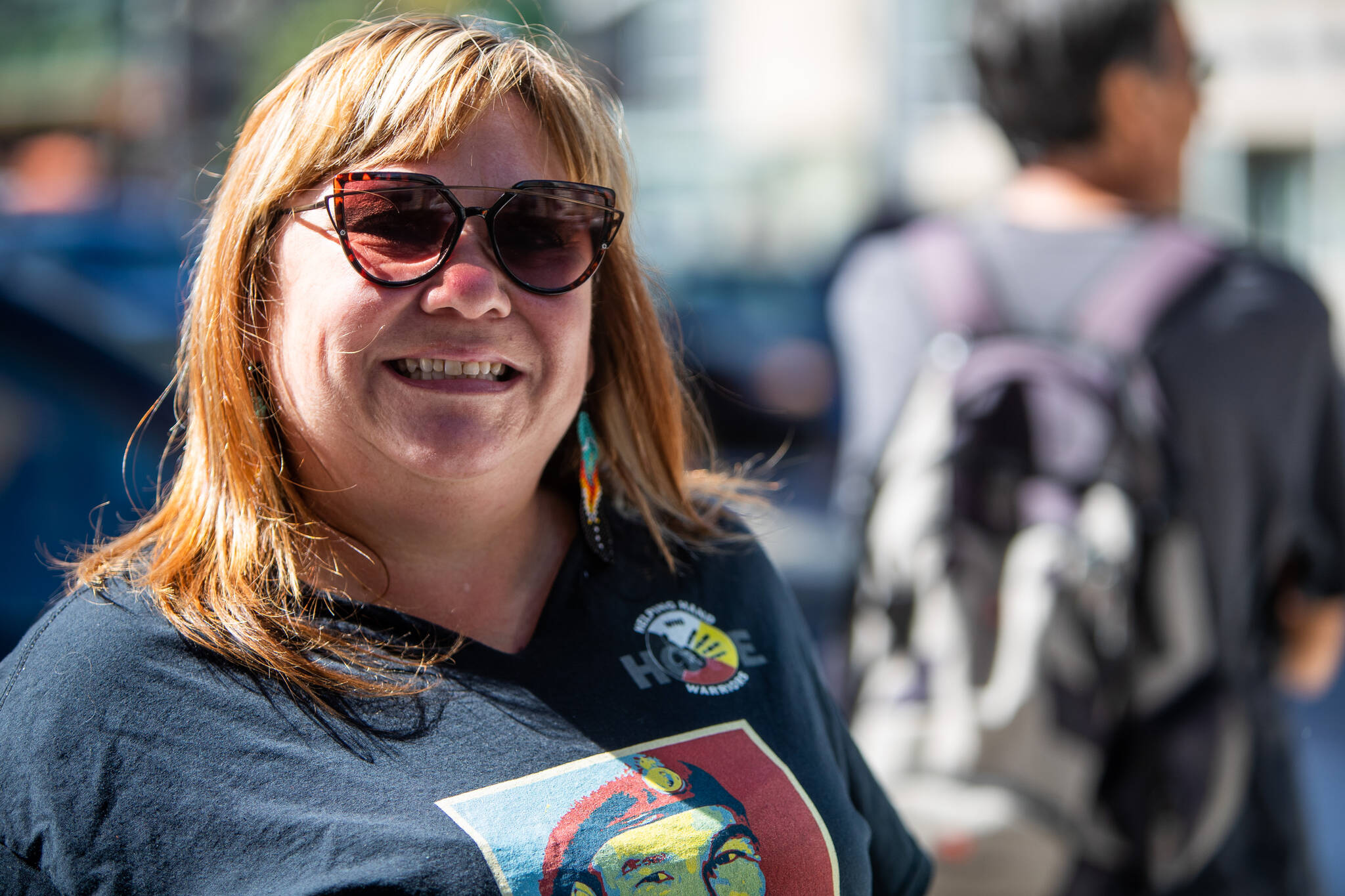 Displacement of unhoused individuals and growing safety concerns in camps were also among the issues brought forth by community members at the walk. In the winter, the unhoused people Angela Brass and her fellow Helping Hands volunteers were connecting with were told to vacate the area they’d been seeking shelter in.

Now, Brass finds many of them on the Main Street strip, where volunteers from Helping Hands distribute sandwiches and traditional medicines.

“Every Saturday we meet at 605 Main St. at we load up our wagons,” Brass said. “(It’s) a good form of heart medicine to be able to give back to your less fortunate relatives that are going through hard times.”

For Matt Halchar, who works for the Downtown Community Safety Partnership, gathering in True North Square provided a meaningful opportunity to shake hands and exchange ideas with volunteers working on the frontlines.

“We kind of know each other now,” Halchar said. “It’ll be a lot easier. Instead of just waving, we feel more comfortable to go up and actually walk (together) when we see each other on patrol.”