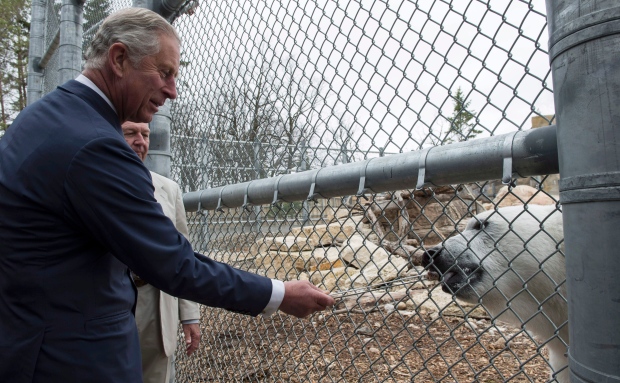 WINNIPEG — Polar bears and planes, pirouettes and Pooh featured prominently as Prince Charles and his wife Camilla spent the last day of their four-day royal tour in the Manitoba capital Wednesday.

Charles may be accustomed to being served his meals, but the tables were turned at Assiniboine Park Zoo when he played waiter to Hudson the polar bear.

There was a look of mock trepidation on the prince’s face as he got up close and personal with the 200-kilogram beast sitting on the other side of a chain-link fence.

Charles used tongs to offer fish to the two-year-old Hudson, who happily gobbled up the treat.

The prince remarked on the size of Hudson’s paws and a zookeeper explained how polar bears in the wild can pull prey from the water with one swipe.

The Duchess of Cornwall, wearing a silver-blue dress and coat, toured the wardrobe and costume department, where she called the costumes “works of art.”

“Look at all the shoes,” she commented as she examined the ballet footwear.

Wardrobe director Alena Zharska explained how the costumes are put together and showed Camilla a pattern for a tutu.

“How long does this take to make?” asked the duchess.

The duchess attended a ballet class for those with physical and developmental disabilities, watched a pas de deux and unveiled a coin designed by the Royal Canadian Mint in honour of the ballet’s 75th anniversary.

Hudson was not the only bear to make his way onto the royal agenda.

Charles and Camilla toured a small gallery of artwork, books and other materials connected to Winnie, a black bear named after Winnipeg and who inspired the “Winnie the Pooh” stories by children’s author A.A. Milne

The couple looked at an oil painting from 1930 by Ernest Shepard of the bear staring into a honey pot and saw a photo of the original bear as well.

The day began at the Red River College’s Stevenson aircraft hangar, where the royal couple joined the Harpers.

Charles and Camilla took turns throwing paper airplanes folded by children and were presented with a tiny aviator’s jacket for their grandson, Prince George.

In a speech, Charles observed that things are different in the province from when he last visited in 1996, but one thing remains the same.

“What has most assuredly not changed is the vitality of this province and the optimism for Canada’s future,” he said.

A pilot in the air force in his younger years, the prince paid tribute to those who can fix planes.

“I have a very determined admiration — respect — for those marvellous engineers who can actually take these things apart and put them back together again, usually after a pilot had broken them or done something awful to them.”

In the afternoon, the prince spoke establishing a Canadian version of his Seeing is Believing program, which takes business leaders into deprived communities, engaging them with social responsibility issues.

“Almost 25 years ago, I realized that there was a tremendous missed opportunity … for business leaders to understand more fully the social and environmental issues affecting their communities and for them to try to do something about them,” he said.

“I am so proud that, with the help of my Prince’s Charities Canada, a similar initiative has now taken root in Canada. Half the battle very often is actually businesses helping to provide their management skills and the ability of those organizations to help people through the endless red tape bureaucracy.

“My Seeing is Believing programmes are about encouraging business and community leaders, such as yourselves, to apply business thinking to help solve community needs in an integrated way and with a long-term view.”

Charles said the next step is to link business leaders in several Canadian cities — including Winnipeg, Calgary, Regina, Toronto and Halifax — as part of the Prince’s Canadian Responsible Business Network.

“I look forward to the pilot projects in Winnipeg, Halifax and Toronto over the coming months which will focus on providing job readiness, employability and skills for disadvantaged young people,” he said. “It seems to me that there are so many opportunities to make a real difference.”

He expressed his gratitude to billionaire grocery empire mogul Galen Weston for his leadership in shaping the beginnings of the new network, as well as RBC and Scotiabank.

Charles did not mention remarks he reportedly made earlier in the trip comparing Russian president Valdimir Putin’s actions in Ukraine to Adolf Hitler.

Britain’s Daily Mail said Charles made the comment during a visit to the Canadian Museum of Immigration in Halifax.

The newspaper quoted museum volunteer Marienne Ferguson, who said her Jewish family fled to Canada from Poland as the German army approached ahead of the Second World War.

It quoted Ferguson as saying she told Charles about her family background and that the prince then said to her: “And now Putin is doing just about the same as Hitler.”

The Canadian Press could not reach Ferguson for comment.

The prince was to speak at the legislature Wednesday evening at an Order of Manitoba investiture held just before a farewell ceremony for him and his wife.