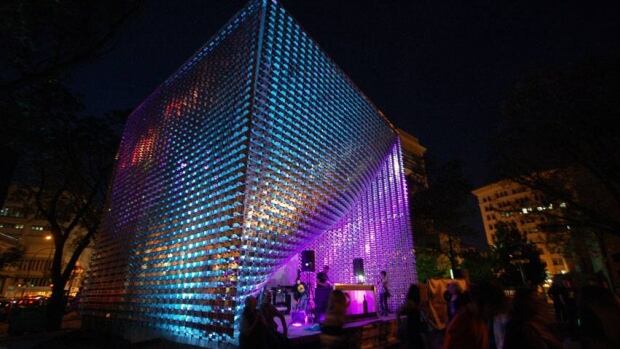 The Cube, a downtown open-air performance space, is one of three Winnipeg buildings selected for Awards of Excellence from Architecture Canada.

Both the Canadian Museum of Human Rights and Manitoba Hydro Place, also in Winnipeg, received  honourable mentions for innovation in architecture for the awards, given every two years.

The Cube is a ‘little gemthatrestores the architects’ role within rituals of daily life in Winnipeg.’— Architecture Canada jury

The Cube, also known as OMS Stage, was hailed for its innovative metal mesh design, which draws back to reveal a stage and can be adapted for everything from concerts to parties.

The jury called the work, by 5468796 Architecture Inc., a “little gem that restores the architects’ role within rituals of daily life in Winnipeg.”

Jurors praised the mesh design for the way it refracted light and images to the outside when closed.

“The Cube is a brilliant work of architectural art. It takes a simple object like the cube and transforms it into a piece of art. The use of materials and their assembly is quite imaginative and evident in how light is refracted,” the jury said.

Smith Carter Architects and Engineers and Antoine Predock received an honorable mention for use of BIM (building information management) technology to lower construction costs and improve long-term management at the Canadian Museum of Human Rights, currently under construction. The Canadian Construction Association has been promoting the use of BIM, which is popular in Europe, by its members.

Kuwabara Payne McKenna Blumberg and partners got a mention for the design of Manitoba Hydro Place, which incorporates energy efficiency. The building is said to be the most energy efficient large office tower in North America.

Other winners of Awards of Excellence for innovation:

North House is a prototype for an affordable house designed for northern climates. (Geoffrey Thun)The new Durham Consolidated Courthouse in Oshawa by WZMH Architects of Toronto won the Awards of Excellence for green architecture for its planning efficiency and contribution to the city.

“This building revitalizes the downtown core and provides a contextual response to a complex architectural challenge. The project provides landscaped open areas and a gateway to the downtown,” the jury said.

The Kerchum residence in Vancouver earned an Award of Excellence for Frits de Vries Architect Ltd. for its sustainable use of materials and landscape, as well as its energy efficiency.

University of Waterloo professor and artist Philip Beesley, whose unusual lightweight ‘textile’ structures were Canada’s entry at the Venice Biennale for Architecture in 2010, won the Allied Arts Awards. The awards will be presented May 27 at a president’s gala for Architecture Canada.