‘The motive was greed’ in homicide of Winnipeg man in Puerto Rico, father says

The conviction of the woman who offered a hit man $3 million to kill her husband — a real estate developer from Winnipeg — in San Juan, Puerto Rico, marks the end of a 13-year fight for justice for his family, the man’s father says.

As he died, Adam Anhang never knew that the woman standing next to him had planned his death, says the Winnipeg man’s father, Abraham Anhang.

“My son, who was in fear of his own life, I’m afraid, said, ‘Run, baby, run!’ And she didn’t run, she just stayed put,” Abraham said during a Wednesday interview with CBC’s Radio’s As It Happens.

Listen to Abraham Anhang’s As It Happens interview:

Adam was stabbed repeatedly and hit in the head with an object while walking with his wife, Aurea Vazquez Rijos, through the cobblestone streets of Old San Juan in September 2005, just 12 hours after he had asked for a divorce, prosecutors said during the woman’s trial.

Adam’s father said Vazquez told the attacker, Alex Pabon Colon, to hit her during the assault, to make it look like she too was a victim.

On Wednesday, a jury convicted Vazquez, along with her sister, Marcia Vazquez Rijos, and Jose Ferrer Sosa, an ex-boyfriend of Vazquez’s, after Colon testified against her. Colon pleaded guilty to the killing 10 years ago.

Aurea Vazquez Rijos is taken to the Federal Court in Hato Rey, Puerto Rico in this September 2015 file photo. On Wednesday, she was found guilty of hiring a hit man to kill her husband, Winnipeg real estate developer Adam Anhang. (Carlos Giusti/El Vocero via AP)

Abraham Anhang described his son as an entrepreneur who was doing positive things for the economy of San Juan at the time of his murder.

“And the tragedy is that this economy here is dreadfully in need of people like him and yet that economy, those people, killed him,” said Anhang.

“You can’t assume that people are going to do that to you. I mean, that is just beyond the pale.”

Vazquez and Adam Anhang began dating two years before he was killed. During that time he bought her a car, an apartment and a business in Old San Juan called The Pink Skirt.

They signed a prenuptial agreement one day before getting married, with Anhang’s net worth estimated at more than $24 million and Vazquez’s at nearly $62,300.

“The motive was greed,” said Abraham.

“The whole family had moved into their house and basically he had to move out. There was no doubt that they looked upon him as a meal ticket and he was dispensable. In fact, they convinced themselves that he was worth to them more dead than alive.” 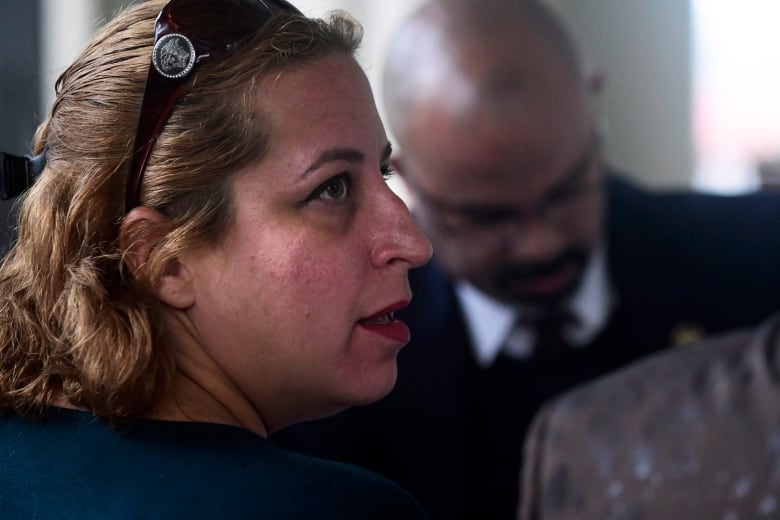 Six months after Anhang was killed, Vazquez sued his parents, seeking $1 million in damages and $8 million from his estate. Shortly after filing the lawsuit, she left for Florence, Italy.

At first, police arrested a different man, Jonathan Roman Rivera, for the murder. He was sent to prison and served eight months of a 105-year sentence, before the FBI opened another investigation at the urging of Adam’s family.

“I was at [Rivera’s] trial and I heard the testimony of the witnesses, and I can tell you that I did not believe that he was guilty,” Abraham said.

“The first man had no motive. He had no connection to [Adam] whatsoever, he had never met him.”

He said the first suspect was charged based on the identification of one visually impaired and intoxicated witness.

The family hired private investigators to track Vazquez in Europe, and the family turned any evidence over to the FBI.

Authorities arrested Vazquez in June 2013 after she flew to Spain from Italy.

She and her one-month-old baby were extradited to Puerto Rico two years later, leaving behind a pair of twin girls that she had with a man in Italy.

Now, after what he called “a very unhappy, abysmal time” in the life of his family, Abraham says he has seen justice — but nothing will bring his son back.

Vazquez is set to be sentenced in January 2019.

Because of Copp & NY Rangers, Winnipeg Jets Get One other 1st Spherical Decide