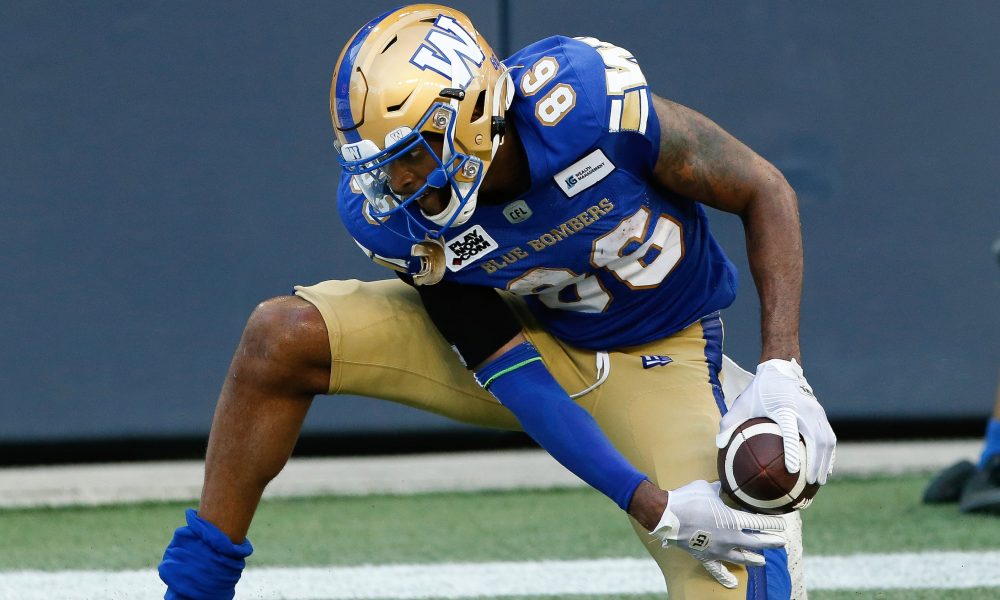 So I was the local Co-Op this morning in the checkout line, wearing my Bombers cap and polo shirt. The guy behind me in line asks me, ‘So were the Bombers lucky or good Friday night?”

I responded with, “You have to be good to be lucky, right?” I immediately followed that up with saying, “The Bombers are perfect…but they aren’t.”

So with that in mind, let’s look back to the game that saw two unbeaten teams square off.

It was a hot Friday night that saw the 5-0 Winnipeg Blue Bombers host the 4-0 Calgary Stampeders. At kickoff if was about 32 degrees and it would not drop many degrees as the game went on. I literally had to turn away from the sun while in line to get into the game to stop my face paint from running! The sweat was running down my face, into my eyes, but I dare not wipe it. That face paint would have been a mess! The heat was there, but so was the crowd of nearly 30,000 fans – 29,746 to be exact!

Having beaten BC the previous week, Winnipeg now had Calgary on their doorstep. Whoever emerged from this game with the win would position themselves on top of the West Division.

Once again passing for over 300 yards, Zach Collaros went 27/38 for 315 yards and two touchdowns. Both of those touchdowns were fabulous catches by Carlton Ogudosi. Who? Carlton Ogudosi, the 6’6” receiver who used all of his sized to pull down the ball! Yes, it is only one game, but with Demski still on the 6 game and Winnipeg looking to strengthen its receiving core, Ogudosi looks like he could fit in very well! For a guy his size, his route running was very impressive.

Once again, Winnipeg had a struggling running game resulting in fans around me yelling, “Stop running the ball.” Combined Winnipeg only rushed for 50 yards. While Winnipeg is having trouble running the ball what we do get to see is Collaros’ creativity, something that was maybe overshadowed by the ability Andrew Harris brought to the Bomber offence in past seasons. Collaros to Ellingson was also an impressive connection with 11 receptions for 152 yards.

Conversely, Calgary had issues in the air. Bo Levi Mitchel only completed 12 of 28 attempts for 187 yards. Now Mitchel is not the only reason their receiving yards were low. His receivers dropped a bunch of open passes. The Winnipeg defence was in the backfield with 3 quarterback sacks, and multiple pressures. Additionally, and it was surprising to me that in head to head matchups, Collaros out performs Mitchel

I also did my part and took Mitchel in CFL Fantasy. I suck at fantasy.

Calgary’s run game was one dimensional, but racked up some yards. Ka’Deem Carey would crank out 110 yards, but was unable to find the end zone. Early in the game, from my Row 1 seats, on the 50 yard line behind the visitor’s bench, I told Carey that I had also selected him in CFL Fantasy this week. Every time he get close to a touchdown, but did not seal the deal, as he came to the sideline I reminded him of my fantasy jinx!

However, I think credit really needs to go to the Bombers’ defence who stopped Calgary two times on the Bombers’ 2 yard line! Previous to that it was first and goal on the Winnipeg 5 yard line.

That stop by the Bomber’s defence would have made the end of the game very interesting if Kamar Jorden had made that catch for a touchdown. Would Calgary go for the single and a tie? Or would they try beat the Bombers’ defence for two points and a win? In the end it did not matter. I coined the last play saying, “Huston, Calgary has a problem.” Who does not have a problem? Dustin Nielson with his play calling on that paly! A thing of beauty!

Yet there were tons of goofy things that happened that game. Winnipeg took a long shot down the field. Collaros found Agudosi for a 38 yard strike! The official game notes show that Calgary challenged for offencive pass interference. Yet in the crowd, I am convinced that the official said the command center was reviewing it. I find the eye-in-the-sky has been fairly useless the last couple of years. They are supposed to step in when there is an obvious missed call. They have been silent for so long, and then call this offencive pass interference?

On another play it looked like someone on Calgary’s return team held a Winnipeg player. Yet there was no immediate holding flag thrown. On the tackle it looked like Winnipeg grabbed a facemask, and that’s when the flag came out. However, when we heard the call on the stadium announce system, it was indeed called as a hold against Calgary.

As for Liegghio he went 2 for 2 on field goals completing his longest of 48 yards. He did miss a point after. However, kickers are struggling all around the league. If Winnipeg was the only team that had a kicking issue, yes hit the panic button. But many kickers are missing. Lauther missed a field goal on Saturday, and Castillo missed one last game.

Hey I do not expect Winnipeg to win every game this year. In fact, I thought Calgary might hand them their first loss. The run game was rough again, and mistakes were made. Collaros is 23-2 as a Bomber. The team has changed a bit, they have some injuries, but they are finding ways to win!

This is a short clip of what Bomber head Coach O’Shea had to say after the game. To hear his full seven minute post game interview as well as other Bombers’ post game interviews check out the comment section in that Twitter post. 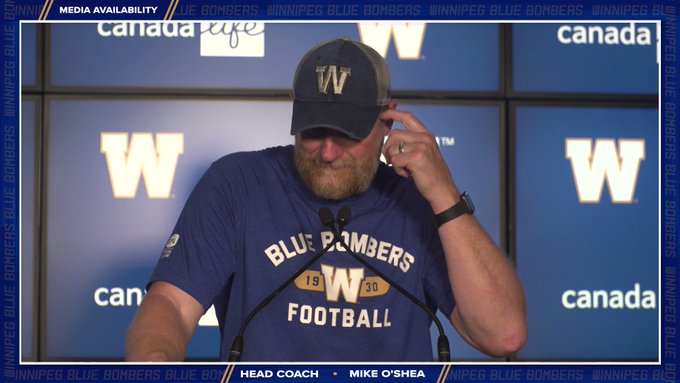 So Winnipeg sits on top of the West Division with a 6-0 record and they are perfect…but they aren’t.

What did I get right? What did you disagree with? Let me know in the comments.

Get the latest CFL news today from CFL News Hub.