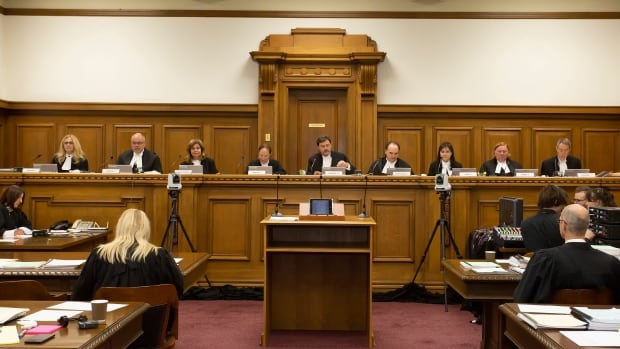 The Supreme Court of Canada will hear an appeal in Winnipeg Thursday morning that could affect minority-language communities across the country.

The case is only the second the nation’s highest court has ever heard outside Ottawa, after Wednesday morning’s historic hearing of a criminal case at Manitoba’s law courts that asked how long a judge should be allowed to take to issue a decision.

After the presentation, people appearing in Manitoba courts will be able to swear or affirm holding a feather. The new affirmation was developed in collaboration with Indigenous elders.

The Canadian Charter of Rights and Freedoms guarantees the right of Canadian citizens to go to school in French or English, even when it’s not the main language of the province or territory they’re in. But that section of the Charter also says there have to be enough children to justify paying for school in that language.

The B.C. school board wanted the province to give more money to its French-language schools and fix school buildings and property, and said the province should pay for not spending enough in the past.

The school board argued the province’s laws and policies breached the community’s language education rights — but the province said it couldn’t provide all the services the schools board wanted because it would be too expensive, and there weren’t enough students to justify the cost.

The claim was partially successful at its 2016 trial in the Supreme Court of British Columbia. Justice Loryl Russell awarded $6 million in damages for a Charter breach based on the school division’s transportation program, which Russell ruled the province “chronically underfunded” for a decade.

The school division appealed and was dismissed in 2018. In the same Court of Appeal ruling, the province’s cross appeal was allowed, and the $6 million in Charter damages were set aside. The school board then appealed that decision.

Now, the Supreme Court must decide what school services B.C. needs to provide for its small but growing French-speaking community.

Thursday’s hearing in Winnipeg will have simultaneous translation headsets so the proceedings can be easily understood by French and English speakers.

The case raises a number of issues, like what governments should have to do when there aren’t enough students to justify full school services in a minority language, and whether courts should consider costs when deciding whether a breach of minority-language rights can be allowed. The Supreme Court will also decide whether B.C. should have to pay damages to its French-language school board.

A number of organizations applied to intervene in the case, which means they have permission to give the court their point of view through written submissions or short arguments at the hearing to help the justices see different angles of the issue and make a better decision.

The Assembly of Manitoba Chiefs, one of the interveners in the case, said the decision will affect all historically disadvantaged groups in Canada, including First Nations.

“The decision on appeal sends the chilling message that when the cost of addressing discrimination is too high, governments can rely on financial considerations to justify their (in)actions,” the AMC said in a news release on Wednesday.

AMC, which represents 62 First Nations in Manitoba, said addressing the history of genocide of First Nations will require investing significant public funds. The government shouldn’t be allowed to use financial constraints as a reason to put off efforts to address loss of culture, and high rates of poverty, incarceration, unemployment and involvement in the child welfare and justice systems that its policies have caused, said AMC.

“Overriding constitutionally protected rights and freedoms based solely on what’s available in the public purse will necessarily exacerbate existing barriers for First Nations in Manitoba,” the release said. “Remedying discrimination is an expensive task. While the costs of remedying discrimination are necessarily high, the consequences of not addressing it are even higher.”

The justices will hear the case in Manitoba’s law courts from 9 a.m. to around noon, and again from 2:15 p.m. until sometime in the afternoon.

The justices could make a decision following the hearing or reserve their decision for a later date.

‘No youngsters will go hungry’: Harvesting Hope 2017 brings in $112Okay for Winnipeg Harvest