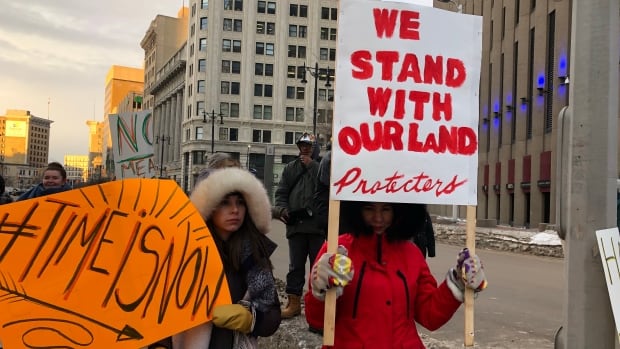 Winnipeg supporters of a fight to keep pipeline workers​ out of the traditional territory of a B.C. First Nation rallied in solidarity at Portage and Main Thursday.

“The time is now,” said Sadie-Phoenix Lavoie, who helped organize the Winnipeg rally. “We’re frustrated and fed up, and enough is enough.”

Supporters met beforehand at the University of Winnipeg for what they described as an “artbuild” to make signs.

The event followed a 24-hour sacred fire at the Manitoba Legislature, which burned Tuesday and Wednesday in support of people from Wet’suwet’en Nation in B.C.

The rally at Portage and Main started with a round dance. (Gary Solilak/CBC)

Members of that nation have been blocking access to their traditional territory by Coastal GasLink pipeline workers with two camps, called Gidimt’en and Unist’ot’en, established along the forest service road with fortified checkpoints.

On Monday, RCMP entered a fortified checkpoint on a forest service road near Houston, B.C., about 620 kilometres north of Vancouver. Police arrested 14 people.

Multiple drum circles at #portageandmain for the Wet’suwet’en protest rally. Lots of cheering and drumming and dancing. pic.twitter.com/mrXfpKjPXt

“I think we’re all very grateful that the conversations have taken place and that the tensions have been reduced,” she said.

“I feel that we, as Canada, really have concerns that we are moving the project of reconciliation forward.”

Before the Winnipeg rally started, police put out a news release warning the public of potential disruptions at Portage and Main due to the gathering. Officers and cadets would be at the scene, it said. 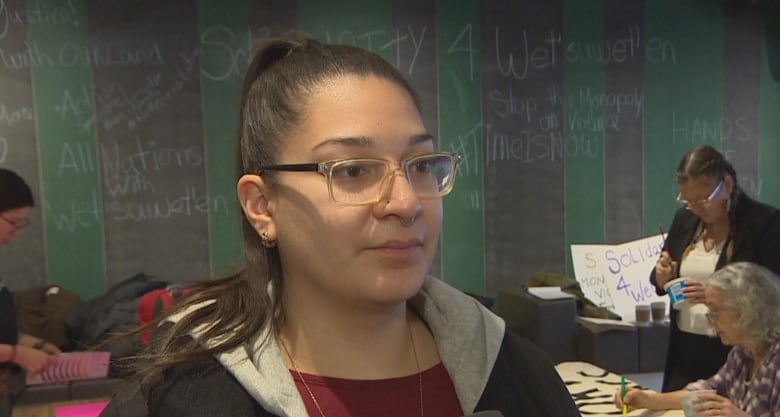 Sadie-Phoenix Lavoie said the rally is about young people in Manitoba showing solidarity and unity with people from the Wet’suwet’en Nation in B.C. (Jeff Stapleton/CBC)

Lavoie said the intersection is a fitting place for the rally because of the commuter traffic and the city’s recent referendum decision not to open it to pedestrians.

“It seems to be, you know, this big inconvenience for a lot of people. And ultimately, we’re the ones that are facing the bigger inconvenience,” Lavoie said. “I’m sorry, but there has to be some way to get your attention.”

‘We want what’s best for the people’

The Monday arrests in Wet’suwet’en Nation spurred protests across the country.

“But yet the actions that has happened shows really that he’s … letting people get arrested for being on their own territory.”

The 675-kilometre pipeline, which would move natural gas from Groundbirch, B.C., to Kitimat, B.C., for international export was cleared by provincial officials by April 2016. It is owned by TransCanada Corp., which changed its name to TC Energy this week. 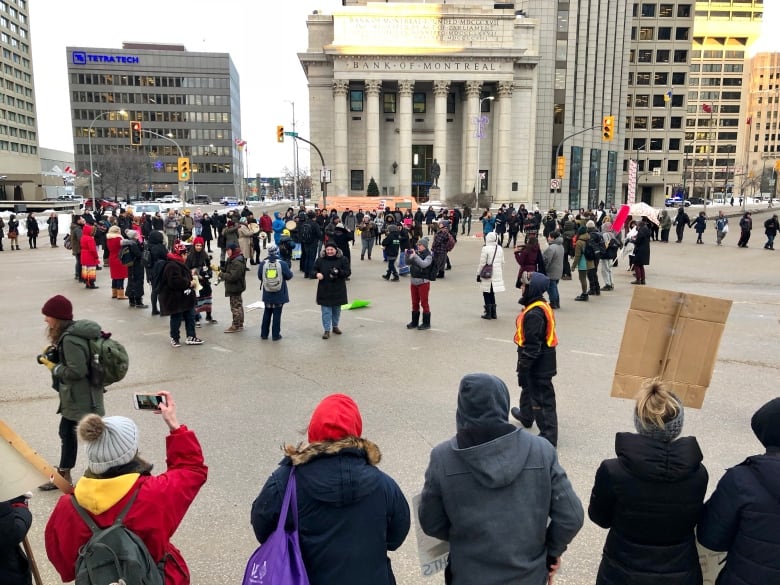 Portage and Main was reopened to traffic by around 5 p.m. (Gary Solilak/CBC)

The National Energy Board launched a multi-step process last fall to determine if the $4.8-billion pipeline should fall under federal jurisdiction and undergo further regulatory review.

Lavoie said the issue should matter to people across Canada, because it speaks to the broader question of the relationship between Indigenous peoples and the Canadian government as well as environmental protections.

“A lot of us don’t have the means to travel and go to B.C., so this is our way of showing that we can still be supportive here in Manitoba,” Lavoie said.

“We want what’s best for the people, for Indigenous peoples, our relationship and for humanity, ultimately, when you talk about the broader question of climate change.”

Jets’ player-written creed offering compass on and off the ice

Reimagining Winnipeg: What these fearless architects can train the remainder of Canada