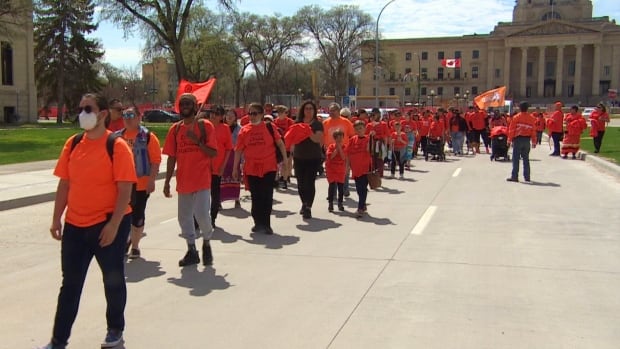 Dozens of people clad in orange marched through downtown Winnipeg Monday to honour residential school survivors and those who never made it home on the one-year anniversary of announcement that potential unmarked graves were found at the site of the former Kamloops Indian Residential School.

Organizers said it was a walk for healing, and to make sure people don’t forget about the destructive impacts of colonial violence such as the Sixties Scoop, residential schools and day schools.

Many are still struggling from those impacts to this day, said Wayne Mason, who helped organize the walk.

“Everybody has a part to play in that.”

People of all ages clad in orange came out for a healing walk in downtown Winnipeg Monday in memory of children who died in residential schools. (Lauren Donnelly/CBC)

People of all ages and backgrounds came out of the walk, some of whom were survivors or family members of survivors.

Tamara Genaille is the daughter and granddaughter of residential school survivors who attended the Sandy Bay School in southwest Manitoba. Her husband also went to day school. 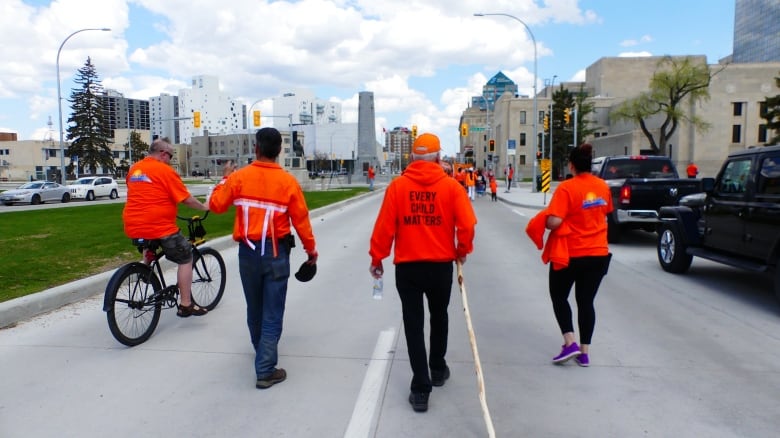 Dozens of people made their way from Memorial Park to The Forks for the healing walk Monday. (Lauren Donnelly/CBC)

She came to Monday’s walk with her six-year-old son on behalf of her mother, who now has mobility issues related to what she experienced at the residential school. Walking with others made her emotional.

“I’m fighting tears thinking about our community members who didn’t make it home,” she said.

Now, she said she hopes future generations, like her son’s, can regain the culture and teachings that were taken from Indigenous people for so many years.

“We need to reclaim that all back for him.”

Rachel Lyons says both of her parents and some of her older siblings were traumatized by the residential school system, and lived with those impacts their whole lives. 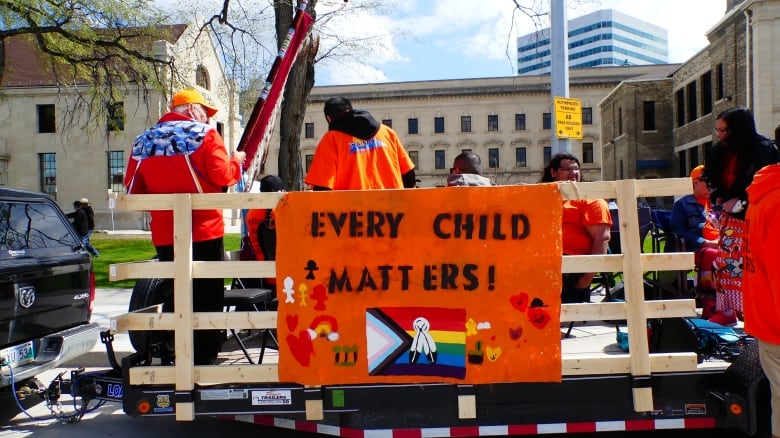 A truck pulls a cart with a sign saying “Every Child Matters” as part of the walk. (Lauren Donnelly/CBC)

She said her mother was taken from her home when she was just three years old.

“We could see it in her face, the sadness,” Lyons said.

Both of her parents are dead now, as well as three of her older siblings. She said she was walking Monday in their memory.

“Some of these people don’t get justice because they’re gone, but they are here in spirit with us.”

Following the walk, people took part in a feast and entertainment at The Forks. 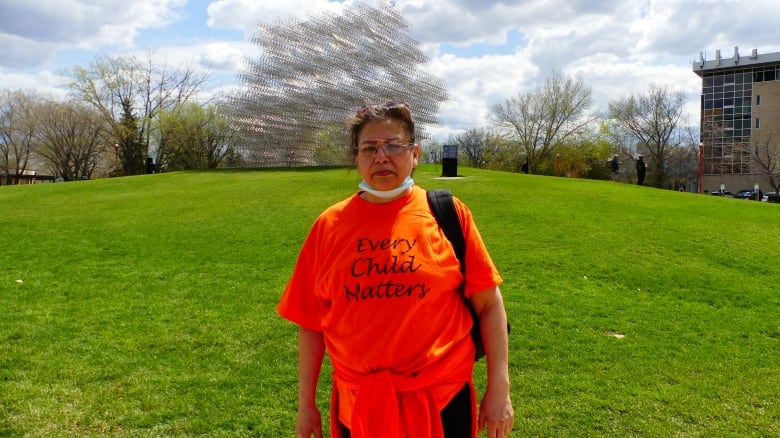 Rachel Lyons took part in the walk in memory of her parents and siblings who were residential school survivors. (Lauren Donnelly/CBC)