In a strange twist of design history, the man who helped develop the North American shopping mall, Vienna-born architect and planner Victor Gruen, later repudiated it.

A monthly series that looks at the structures and spaces that shape our city. Read more here.

A Jewish socialist, Gruen left Austria after it was annexed by Nazi Germany in 1938. Settling in New York and later Los Angeles, he began working in store design, specializing in alluring shopfronts.

He had bigger plans, however. Gruen wanted to create a North American equivalent to the European city square, and he envisioned large centres that would showcase retail shops but also act as recreational, cultural and civic gathering places. He imagined multi-use facilities, with residential components as well as medical clinics, schools and childcare, libraries, cafés, indoor gardens and aviaries.

Gruen’s dreams were not fulfilled, and we’re not just talking about today’s conspicuous lack of shopping-mall aviaries.

Because Gruen despised automobiles, he wanted a pedestrian-friendly space where families could comfortably stroll from shop to shop. Instead, the suburban mall accelerated the rise of car culture. Because Gruen liked urban density, he wanted to concentrate stores and services. Instead, the suburban mall led to sprawl. In a 1978 talk, Gruen stated that he no longer wanted to be identified as the father of the shopping mall. “I refuse to pay alimony for these bastard developments,” he declared.

Winnipeg’s Polo Park, one of the earliest large-scale shopping malls in Canada, came about long before Gruen’s ultimate disillusionment, as part of the wave of modernist developments that reflected our city’s rising postwar confidence and affluence. 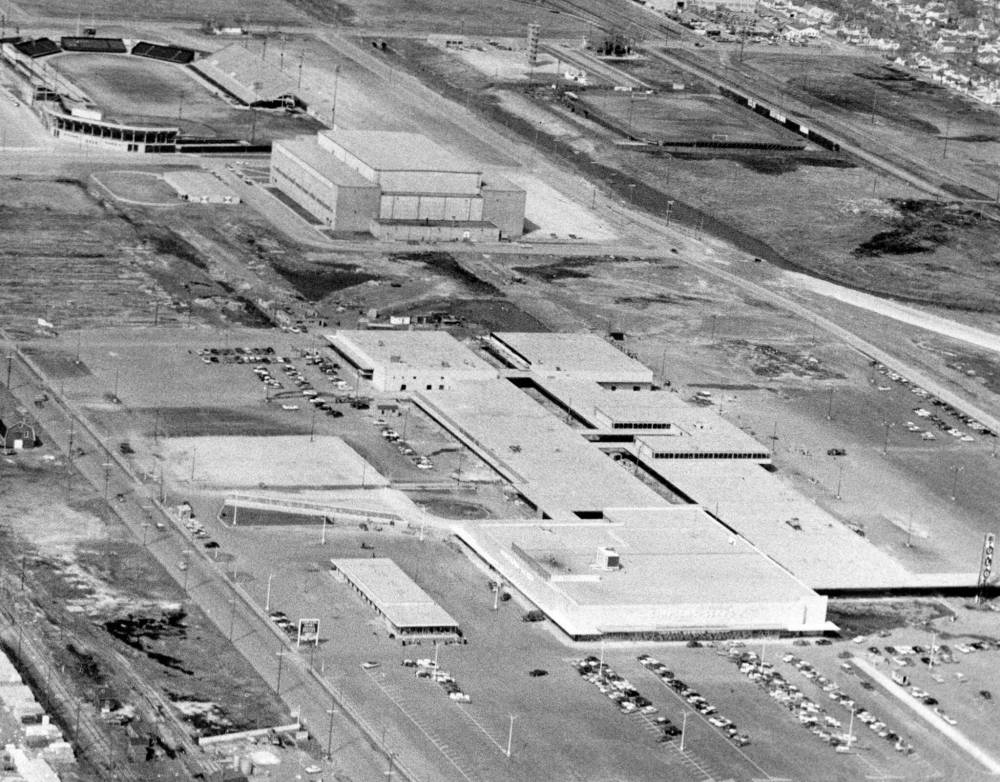 The initial design of Polo Park, which opened in 1959, was an open-air concept. (Winnipeg Free Press files)

Opening in 1959, Polo Park expressed the early optimism of the mall’s possibilities, as well as Winnipeg’s sense of itself as a forward-looking, up-to-date metropolis.

The original design has since been through so many additions, expansions and renovations that the 1959 structure isn’t really recognizable anymore. Even as the North American mall has experienced a dramatic historical trajectory, rising swiftly in the 1950s and ’60s, morphing into 1980s mega-malls like the West Edmonton Mall (aquariums, ziplines, roller-coasters!), and then slipping into decline, Polo Park has adapted and changed in that steady Winnipeg way, remaining a consistent draw over more than six decades. 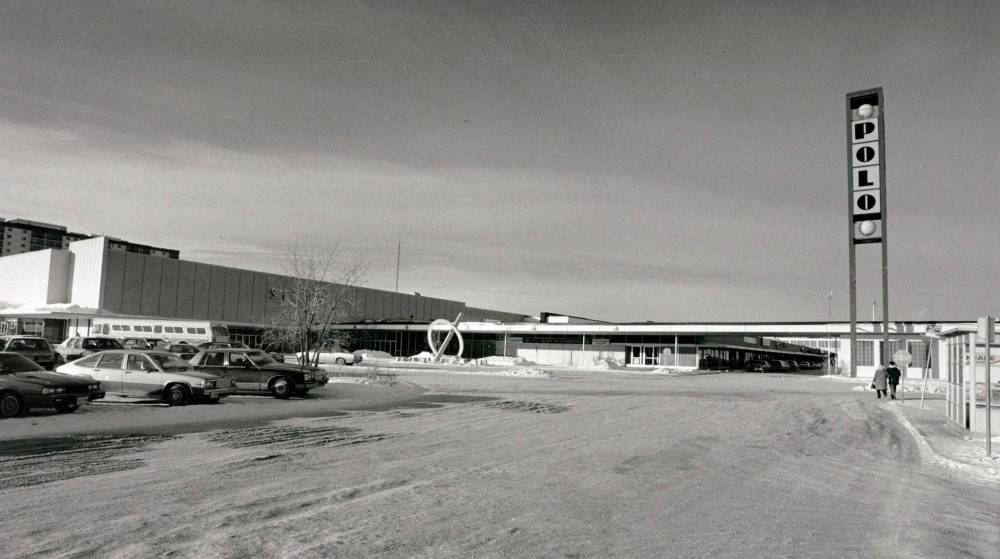 According to the Winnipeg Architecture Foundation, the Polo Park Mall was built on a former horse-racing track and designed by local architectural firm Green Blankstein Russell (GBR).

The initial 1959 design was actually an open-air mall, anchored by Simpsons-Sears, with two lines of smaller stores and services, their doorways protected by flat sheltering roofs held up by slender metal poles. Between the parallel roofs were courtyards with fountains and seating.

Perhaps as a response to Gruen’s dream to fuse commercialism and culture, there was also some cool modernist art from local artists George Swinton, Richard Williams, Duane Eichhold and James Willer. These sculptures, relief sculptures and mosaics weren’t just decorative afterthoughts but an integrated aspect of the larger design. 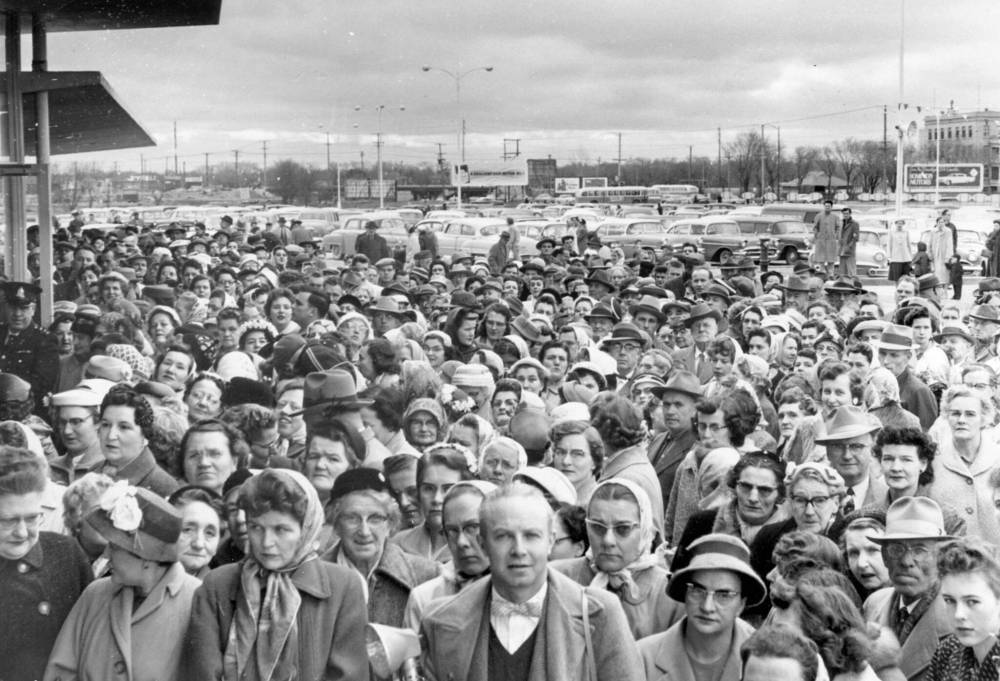 A huge crowd turned up the the opening of the new Simpson-Sears store on May 6, 1959. (Winnipeg Free Press files)

The structure’s form was low and long, like the prairie that surrounded it, and of course there was a vast parking area to accommodate the Winnipeggers who drove to the mall from around the city.

Another Winnipeg factor was winter, and it’s no surprise that in 1963, the already popular Polo Park became one of the first enclosed malls in Canada, with GBR undertaking that transformation. 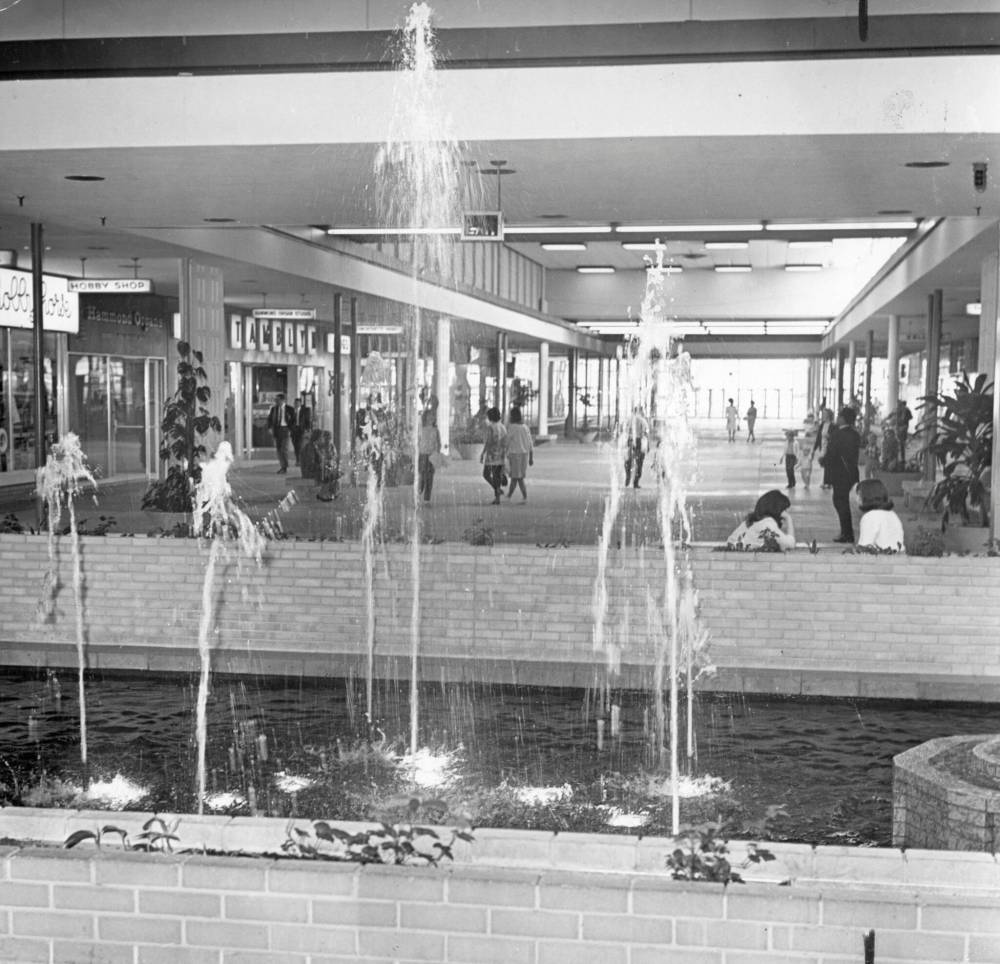 In 1968, the addition of Eaton’s made Polo Park the second-largest mall in Canada. A second storey was added in 1986, and at different times the mall has included a movie theatre and a bowling alley. There were further changes in 2007 and 2014. Recently, the Winnipeg-based furniture company EQ3 has undertaken a radical revamp of the old Sears space.

Dr. Sarah Elvins, a historian at the University of Manitoba, teaches courses in the history of consumer culture. Growing up in Hamilton, Ont., she was also a total mall kid. 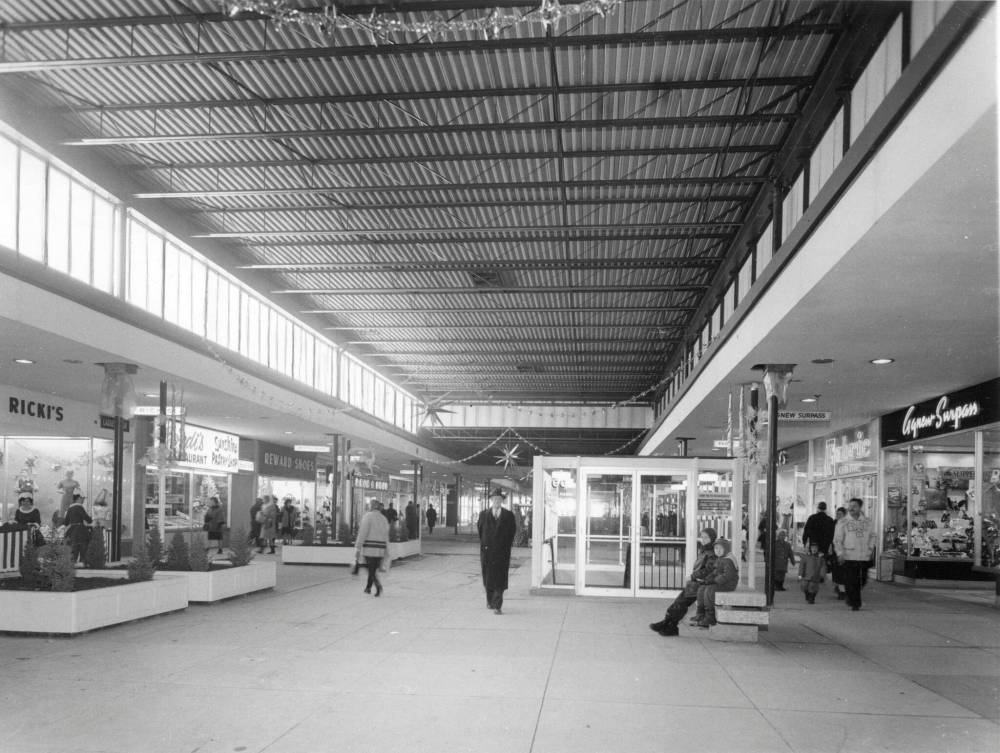 “I hung out at Jackson Square basically every Saturday in the 1980s,” she relates. “I also worked at the Bombay Company there.”

As Elvins suggests, malls offered an expanded way of looking at shopping, with “the creation of enclosed space that was not just for consumption but was also part of leisure time, so that shopping became a pursuit.

“It was climate controlled. There’s music piped in. There’s a fountain to sit around,” she says. “That made it a destination.”

The enclosed mall also made for good business. “The encapsulation of the mall really encourages you to consume,” Elvins explains. “You lose track of time. You’re encouraged to wander aimlessly and lose track of where you are.

“You can’t see the outside anymore. Maybe there’s a skylight in the food court, but most of the time, once you walk into that world, it’s a completely separate space. The architecture of the mall is designed to make you feel that you’re cut off from the normal world and in this exciting new place.” 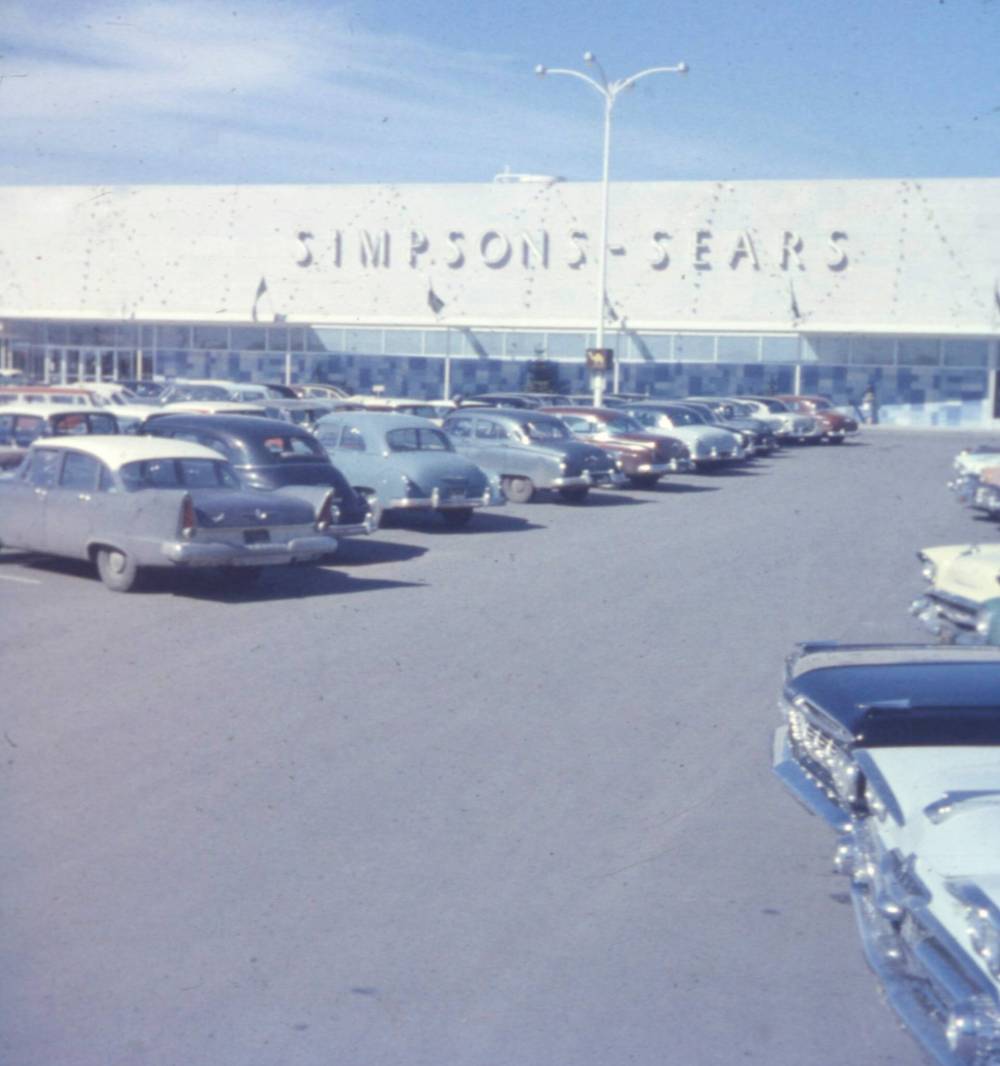 Simpsons-Sears was the mall’s anchor when it first opened; the space is now an EQ3. (Winnipeg Free Press files)

These design factors lead to a phenomenon sometimes termed “the Gruen Effect,” where you go from shopping for one specific thing you need to generalized shopping for all kinds of things you’ve only just realized you deeply, deeply desire. Elvins calls it “going off-list.”

Malls have changed over the decades, and so have cultural attitudes to the mall.

The shopping mall “was never perfect,” Elvins points out.

“It was never a truly public space. It was privately owned, so you have security guards who can pick out anybody who’s seen as problematic, and there are certain racial and class exclusions that happen because of that.

“But we can’t underestimate how much people loved that space in the 1950s and ’60s,” she says. “For suburban housewives, who felt isolated and alienated, it was a way to be able to meet other moms and walk around the mall.” 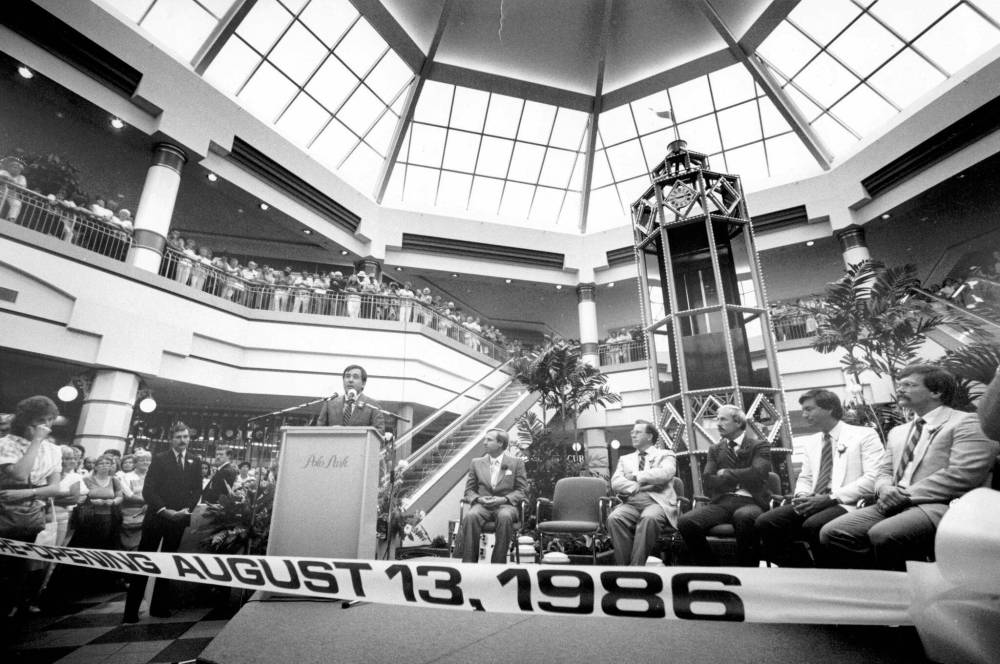 Construction of malls in North America peaked in 1990, and in many cities and towns, large malls are now shutting down. This has led to a fascination with so-called “dead malls.”

“You can see all kinds of websites now that show either empty malls or malls that have been repurposed,” according to Elvins.

“Now you’re going to see a kind of nostalgia for the mall, in the same way that when the department stores went into decline, people talked about how terrible it was to lose the downtown department store, but they still didn’t shop there.”

For many people, malls call up memories of hunting for jeans and albums, of just hanging out and drinking Orange Juliuses. But Elvins suggests generation X nostalgia for the mall can be complicated. “People really liked the mall,” says Elvin. “But but they also love to hate it.

“If you go back and look at the ‘80s and pop culture and film, there is a celebration of going to the mall as something that was fun. Think of movies like Valley Girl, ones that celebrate the teen experience. Sometimes there was a critique of this as really conformist or shallow, but the mall was also seen as a place, especially for teens, that you would have a certain level of autonomy.”

Elvins also cites the recent nostalgia-packed Netflix series Stranger Things, which leaned into the 1980s vibe with its fictional Starcourt Mall, while also trashing the place during a massive battle with interdimensional monsters. 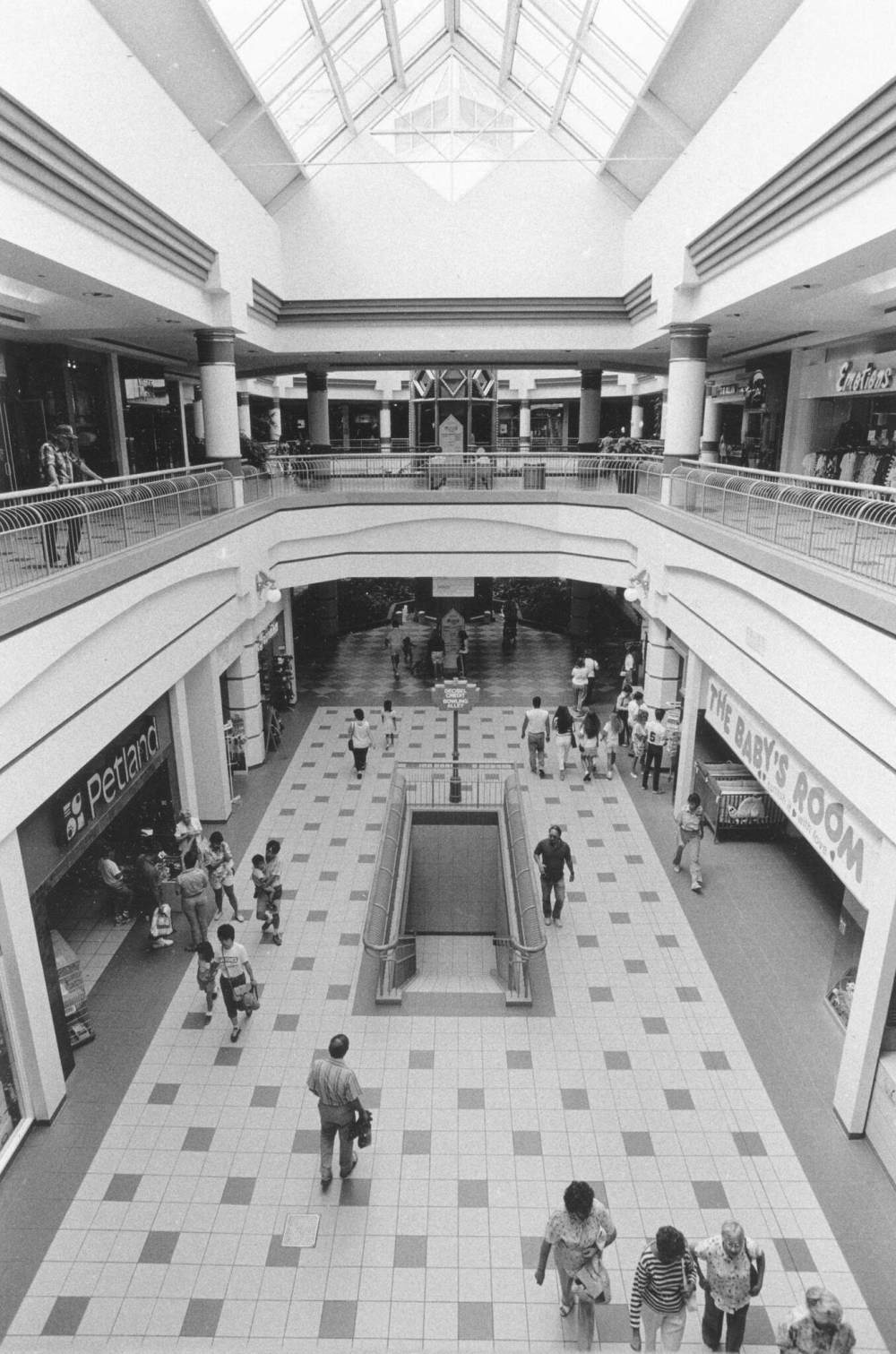 Moving into an uncertain future, the mall might need to reinvent itself, as it adapts to massive shifts in shopping habits. “The internet is clearly one of the big factors,” Elvins says. “The other big competitor to the mall is the big-box store like Costco or Walmart.

“There’s a newer generation that has grown up without that experience of needing to go and touch things, that is happy to go on a website and pick something out. And especially after the pandemic, even more people have gotten used to the idea of sitting at home and shopping and then having things delivered to them.”

Still, the shopping mall hasn’t given up, as we can see in Polo Park’s new EQ3 flagship store. The design of this high-ceilinged, 44,000-square-foot space busts up the original esthetic of the mall as a windowless fortress of commerce. Extensive exterior windows let in the prairie sun, illuminating multiple display rooms, a wall of plants and a café run by local chef Mandel Hitzer.

So far there’s no aviary, but there is the 21st-century promise of “experiential retail,” with a multisensory immersion that goes beyond just shopping.

The Sprudge Espresso Information To Winnipeg