Canada’s most decorated Indigenous war veteran and a Manitoba icon has been immortalized on a new Canada Post stamp.

Sgt. Tommy Prince was born in Petersfield in 1915 and grew up in Brokenhead Ojibway Nation, attending Elkhorn Residential School. He volunteered for the Second World War and later joined the 1st Canadian Special Service Battalion, known as the Devil’s Brigade. He was known for his marksmanship and acts of bravery.

While serving, he received the Military Medal from King George VI, and is one of 59 Canadians to receive a Silver Star from the U.S. president, along with being one of only three people in history to receive both awards.

Prince later served with the 2nd Battalion Princess Patricia’s Canadian Light Infantry during the Korean War. In his time in the military, he received 11 medals for heroism.

Later in life, he advocated for the abolition of the Indian Act. He struggled with civilian life, ineligible for any veteran’s compensation or benefits due to his Indigenous heritage. He died in Winnipeg at the age of 62 in 1977.

The stamp, which was unveiled Monday at the Canadian Museum for Human Rights, includes a photo of Prince in his Korean War uniform, with northern lights in the background meant to represent the sky of his childhood home in Brokenhead. The stamps are currently available for pre-order and will be available at post offices on Oct. 28.

The stamp program seeks to tell stories about the people who have shaped our country, Canada Post director of communications, strategy and external engagement, John Williams said.

Prince’s story is important to our collective knowledge, he said.

“Here was a decorated war veteran who had honourably served his country, and yet he still experienced the harms of racism, discrimination, and our colonial past,” Williams said.

“It was an affront to his service as a soldier and the pride he took in his Ojibwa heritage.”

Brokenhead Chief Gordon Bluesky said Prince’s story is one of resilience in the face of systemic struggle.

“I couldn’t imagine what a person like Sgt. Tommy had to endure, carrying the traumatic PTSD that he already had from attending residential school, and just from the systematic racism that he had to endure, even prior to going into it,” he said Monday. “That’s a lot to be carrying, and then also to be going into that role, and then leading battalions into war.” 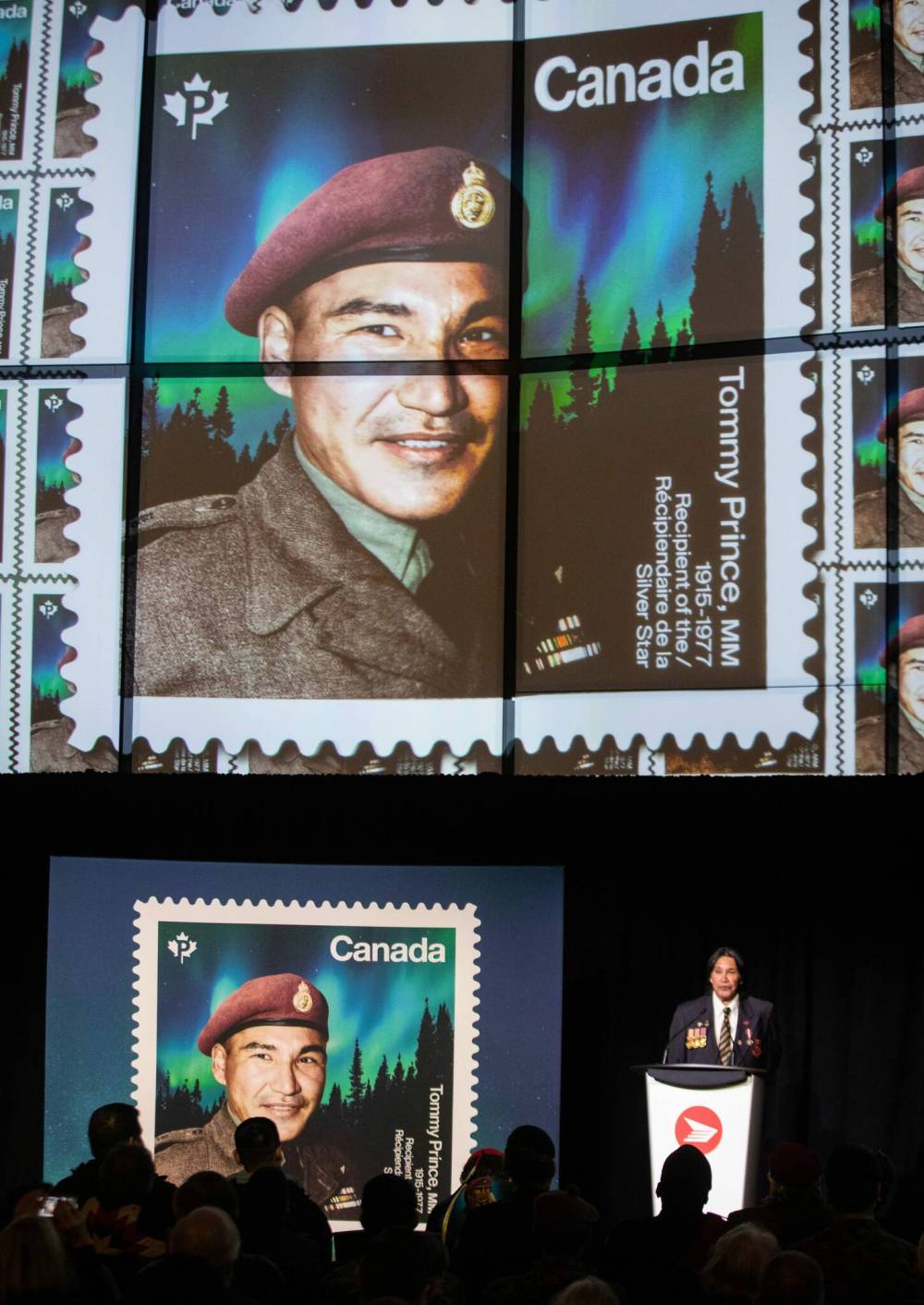 The stamp features Prince in his Korea War uniform with northern lights behind him. (Jessica Lee / Winnipeg Free Press)

While Prince has been memorialized in recent years — a school is named after him in Brokenhead, as is a barracks at Canadian Forces Base Petawawa (Ont.), and there is a Sgt. Tommy Prince Street in Winnipeg and a Tom Prince Drive in Petersfield — his story must continue to be told, as it serves as a reminder of the work that still needs to be done to foster reconciliation, Saint Boniface—Saint Vital MP Dan Vandal said.

“Despite coming back from the Second World War a decorated veteran, he wasn’t afforded the same benefits that a white veteran received, and as an Indigenous person, he could not vote in federal elections,” Vandal said.

Musicians from different walks of life, including drum groups, a bagpipes player and Winnipeg singer-songwriter William Prince, performed at the event. Prince’s son, Tommy Prince Jr., was in attendance and described his father as a loving, caring man who loved to make others laugh.

“If he had a dollar in his pocket, and you needed it more than he did, he would gladly give it to you,” he said.