Spring has sprung, and so have a bevy of events and things to do now that Manitoba has phased out all restrictions.

Earlier this month, mandatory proof of vaccination and indoor mask policies wound down. For the first time in nearly two years, Manitoba has no public health restrictions.

The elimination of any sort of capacity limits on businesses and venues — in addition to, hopefully, a more stable COVID situation after a punishing Omicron wave — has led to an influx of events to enjoy in the weeks to come as the days grow longer (and hopefully warmer.)

This was a long, hard winter and you deserve to have fun. Everyone is at a different place when it comes to their comfort level around a lot of other people. But if you are ready to get out there — maybe with your mask still on or in your back pocket, just in case — here are some of the activities available in the near future.

This week is spring break and if you’re struggling with the prospect of keeping your kids entertained for five straight days — let’s be honest, they’ll be saying they’re bored by Tuesday morning — the Festival of Fools has fun programming scheduled for The Forks Market that should entertain the young ones and save your sanity.

The 22nd annual Festival of Fools takes place today through April 1 and features a lineup that should entertain any kid (and just about any adult) as it includes acrobats, comedians, musicians, magicians, puppeteers, unicyclists, and more. Tickets are free, but pre-booking tickets through Eventbrite for your desired events is required to attend. Visit www.kidsfest.ca/festival-of-fools for a full schedule and more information.

Plenty of puck to be played 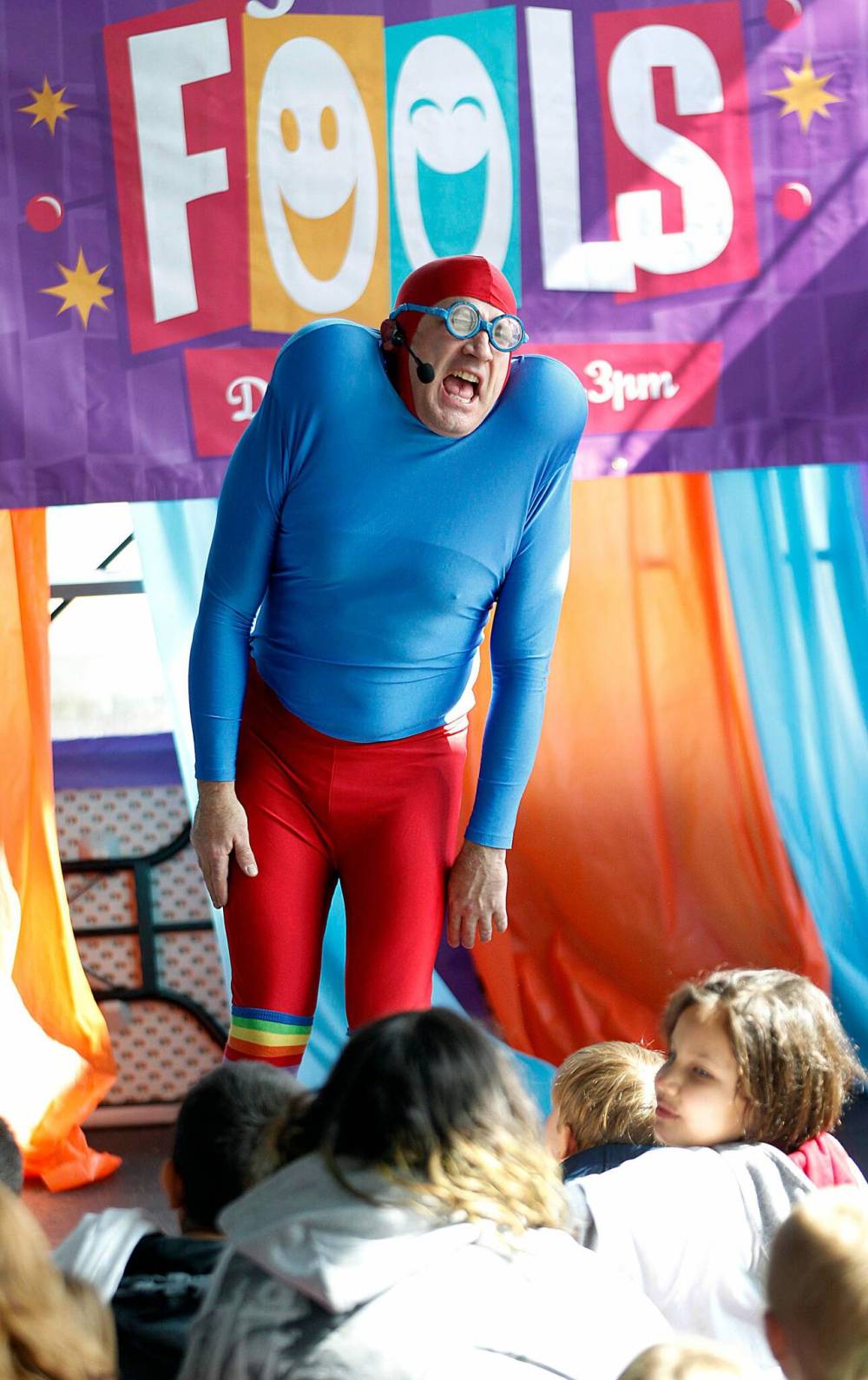 Winnipeg’s three major hockey teams — the Jets, the Moose, and the Ice — are all back to 100 per cent capacity and would no doubt love to have you in person to cheer them on.

The Jets are hanging around in the Western Conference Wild Card conversation and pretty much all of their games down the stretch are must-wins. They have eight games left at Canada Life Centre from this evening against the Arizona Coyotes through April 29. In addition to the team that left Winnipeg for the desert, they welcome the Los Angeles Kings, Detroit Red Wings, Colorado Avalanche twice, Seattle Kraken, Philadelphia Flyers, and Calgary Flames. 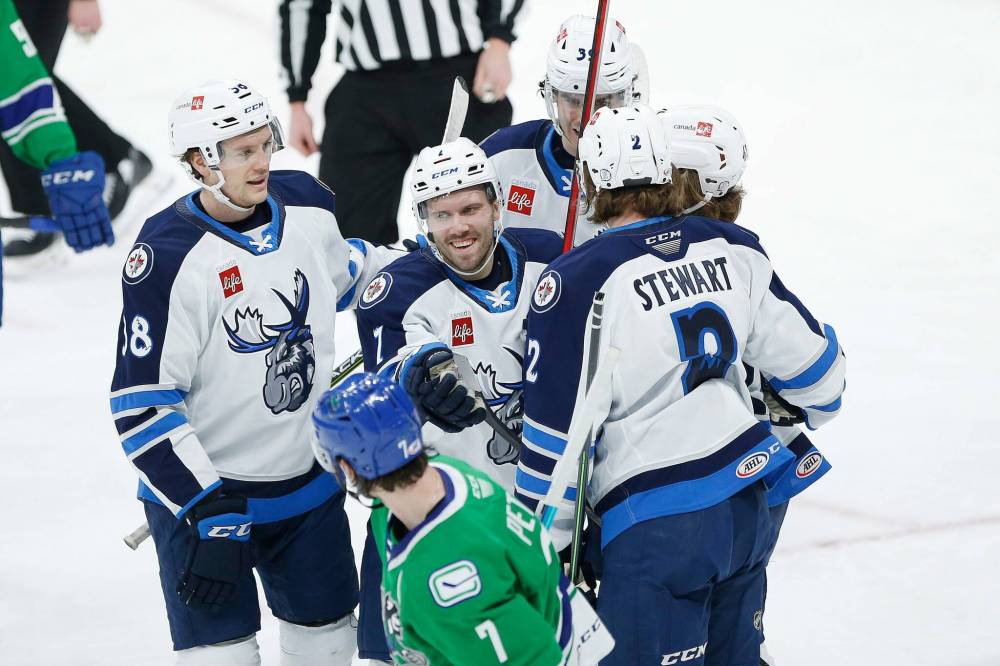 There’s plenty of hockey to be played, and the Manitoba Moose are in the thick of the hunt for the Calder Cup playoffs. (John Woods / Winnipeg Free Press files)

The Moose, meanwhile, are one of the AHL’s top teams and have a terrific home record at 19-6-0. Like the Jets, their farm club has eight home games left — six against Canadian opponents in the Laval Rocket, Toronto Marlies, and Abbotsford Canucks. If you’re not looking to break the bank, the Moose provide good entertainment at a reasonable price.

Note that proof of vaccination is still required for Jets and Moose games.

Down south at the University of Manitoba campus, the Western Hockey League’s Winnipeg Ice have been red-hot all season and have already clinched first in the East Division. They have six more games to play at Wayne Fleming Arena, including this afternoon, Tuesday, and a four-game home stand from April 9 through 15 to wrap up the regular season.

Socials and shows to support Ukraine

Winnipeg has a large Ukrainian population and the thoughts of many citizens are with the Ukrainian people impacted by the ongoing Russian military assault and associating humanitarian atrocities.

A number of organizations and individuals have already held fundraisers and events over the past month to raise money and supplies to aid Ukraine, and two such events are coming up if you want to do some good and have some fun.

The first is the Support Ukraine Benefit Social on April 1 at Earl Grey Community Centre (360 Cockburn St. N) from 6 p.m. to 11 p.m. The social is family friendly and includes everything a classic Manitoba social should — silent auction, 50/50 draw, dancing (do you remember the Boot Scootin’ Boogie after two years sans socials?), food, and a cash bar. Tickets are available on Facebook by searching “Support Ukraine Benefit Social.”

The second is Park Alley’s (730 Osborne St.) “Love Songs for Ukraine” event on April 10 in support of the Ukraine Humanitarian Appeal. Local bands will donate their talent and provide 11-straight hours of live music from noon until 11 p.m.

You can also knock down pins to raise money as the entire day’s take from the alley’s six lanes — in addition to all profit from food and drinks — will be totalled, matched by the owners, and donated. Another sponsor on board will tack on an additional 50 per cent after the owners match it, meaning every dollar raised is really $2.50. 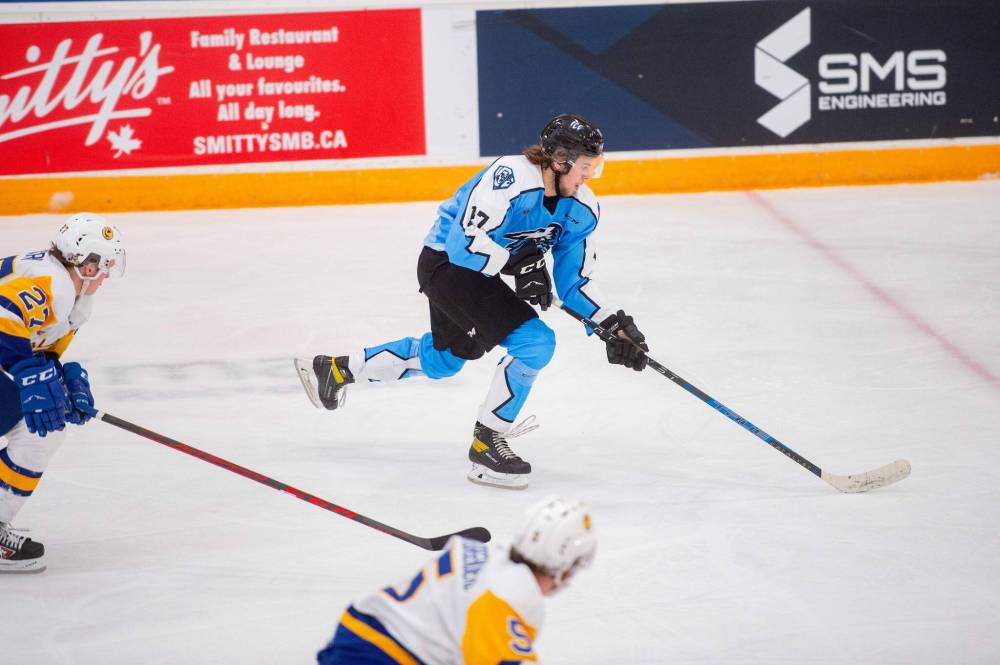 Owen Pederson and the Winnipeg Ice have plenty of hockey left to play at Wayne Fleming Arena at the University of Manitoba. (Mike Sudoma / Winnipeg Free Press files)

The Winnipeg Jazz orchestra will throw it back 100 years at the West End Cultural Centre on April 7 to explore music from the early days of the Roaring 1920 big band era.

Specifically, the “Last of the Blue Devils” show will pay homage to the many territorial dance bands of that era which “played an endless series of one-nighters no more than a day’s drive from their headquarters” throughout the midwestern U.S. and “would travel from gig to gig until the money ran out often leaving musicians stranded hundreds of miles from home.”

The show starts at 7:30 p.m. and tickets start at $35 through Eventbrite; mask and proof-of vaccination requirements are still in effect at the West End Cultural Centre at this time.

Get ready to rock 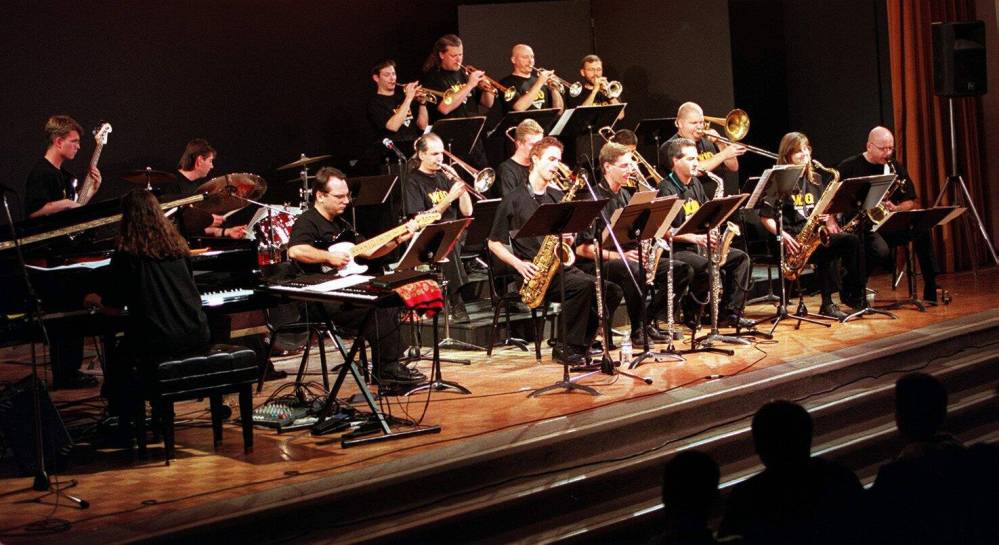 With the pandemic came a shocking lack of opportunities to throw up the sign of the horns, join a mosh pit, or head-bang — banging your head against the wall during lockdown does not count — as concerts have been few and far between.

Next month, hard rock and heavy metal music will abound and provide a trio opportunities to see your first big arena show in two years.

Alice Cooper, the so-called “Godfather of Shock Rock,” is bringing his raspy voice and élan to Canada Life Centre on Saturday, April 9. The 74-year-old just released new album, Detroit Stories, which dropped in February and hit no-1 on the Billboard album sales chart. Cooper will be joined by special guest Buckcherry.

If Cooper doesn’t satisfy your urge for in-your-face showmanship, metal-core mega-group Slipknot comes to town two days later — Monday, April 11 — as part of the Knotfest Roadshow tour. Slipknot, established in 1995, is well-known for putting on high-energy, engaging shows and have built up a large following of loyal fans over the past 25-plus years.

To cap off the rock-heavy week, hardcore band Rise Against will hit the stage on April 14 to showcase their two-decade-long discography, and specifically their newest album Nowhere Generation, which was released last June to critical acclaim.

Ramble The Exchange District on foot, by bike — or, the Winnipeg Architecture Foundation says, even by wheelchair — as you uncover clues to learn the stories behind some of Winnipeg’s best-preserved turn-of-the-century buildings.

The Hidden Winnipeg Architectural Scavenger Hunt is a great excuse to get outdoors on the last day of April — it begins at 5 p.m. on April 30 in Old Market Square, and teams of all ages and mobility levels are welcome. Registration is $6 per person, through Eventbrite.

Go get some ice cream 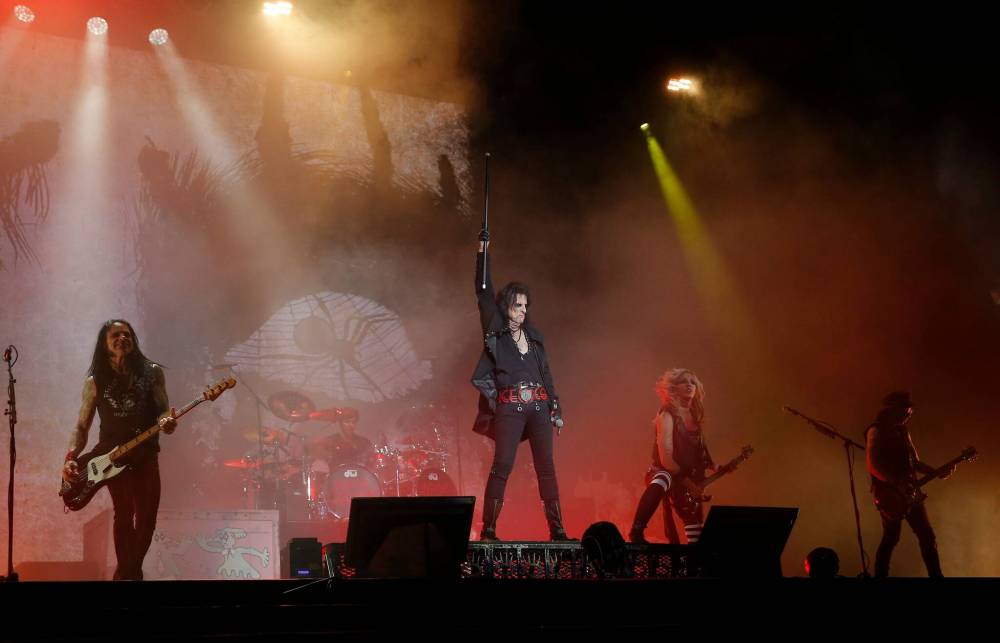 If the forecast is to be believed, by the end of this week, temperatures will be zero or above. After the bone-chilling winter we experienced, anything above freezing is ice cream weather. You can get out after dinner for a sweet treat and a walk (good luck avoiding the puddles!) before the sun sets — Winnipeg is gaining daylight rapidly and April 1 will be the first day the sun sets after 8 p.m.

Your local ice cream spot might already be open for business, and going out for ice cream is just more fun than eating it at home (plus, in cooler temperatures, it doesn’t melt as fast.) 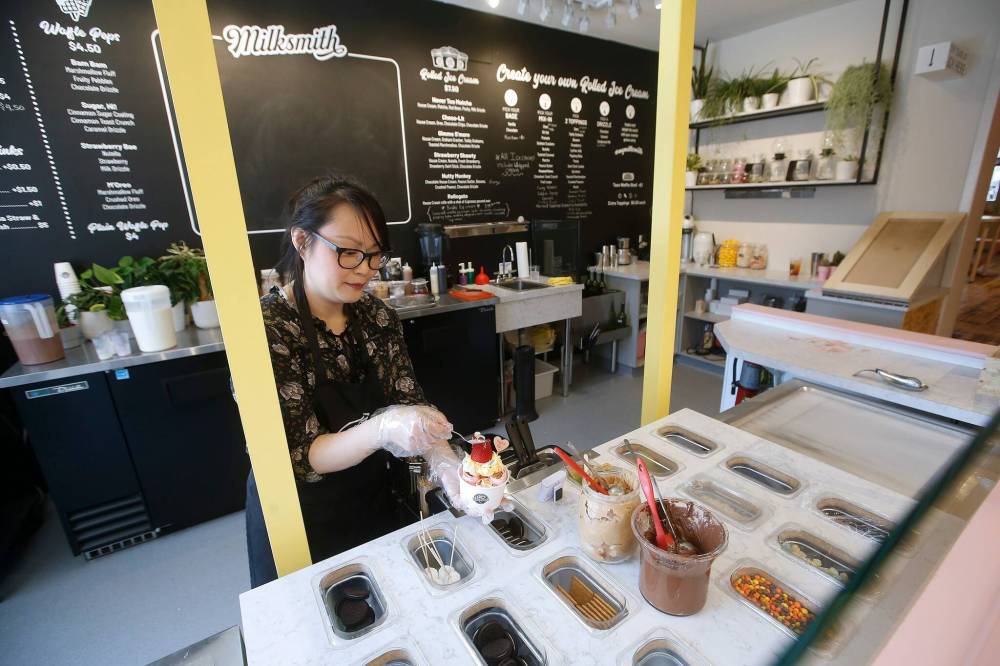 I am quite the ice cream enthusiast and some of my favourite local shops are Sargent Sundae (2053 Portage,) Fete (300 Assiniboine Ave.), and Chaeban (390 Osborne St.) but every neighbourhood has that classic spot people flock to. Some of just a few: Banana Boat (166 Meadowood Drive) Dug & Betty’s (309 Des Meurons St.), Milksmith (651 Corydon Ave.), and Sub Zero (298 Jamison Ave.) 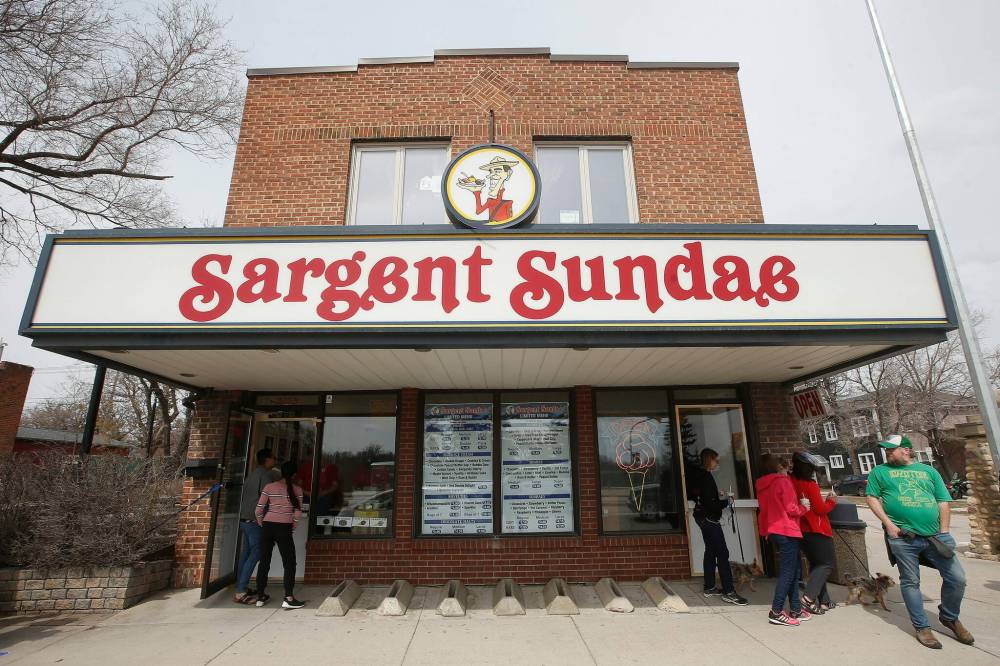