Over the past decade, Matt Cohen, a Winnipeg advertising pro, has been searching for ghosts in the Exchange District.

No, not those kinds of ghosts.

Matt Cohen with a can of ham and lemon polish, products that are advertised on the side of buildings near Bannatyne and Main. (Jessica Lee / Winnipeg Free Press)

The ghosts Cohen has been chasing are old advertisements, splashed across the exterior walls of some of the city’s oldest buildings, dating back as early as the turn of the 20th century. What appealed to Cohen about these poltergeists is that they showcased the geist of zeits long gone, telling hundreds of unique stories about the businesses that once filled the city’s most historic business area.

“The nature of advertising is that it’s fleeting,” says Cohen, who has collaborated with the Winnipeg Architecture Foundation to publish a forthcoming walking tour guide of the city’s ghost signs. “When they painted these signs, they didn’t mean for them to be around for 200 years.”

Now, the signs serve as a reminder of what once was.

The ghost obsession began for Cohen when he was on the board of the local ad association, which was approaching a milestone anniversary. He thought it would be interesting to contact the person who documented the city’s ghost signs. But there wasn’t one, so he became that person.

“And the only way to find them is to walk up and down the streets and alleys,” he said. And then you have to look up. 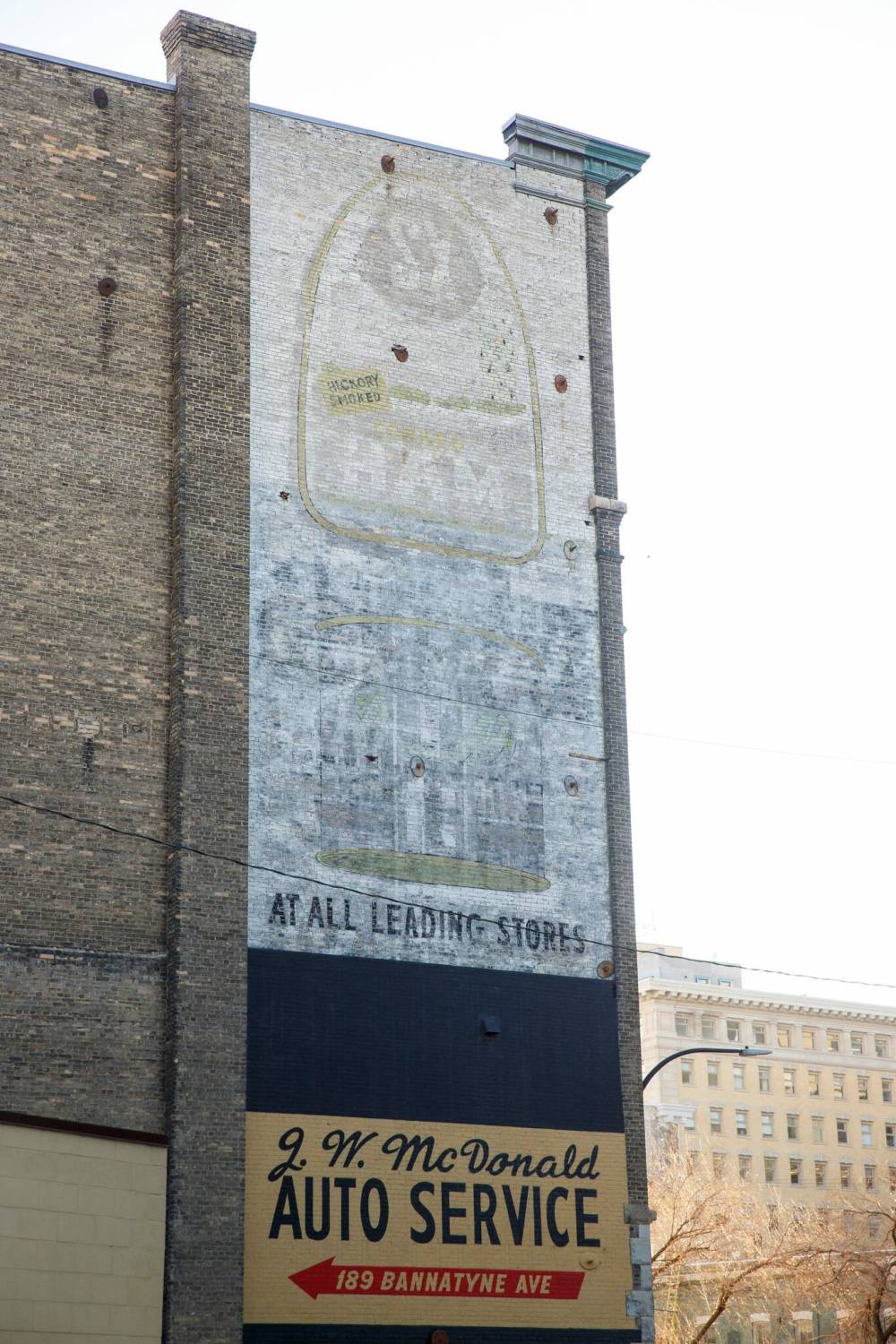 When he looked up, Cohen saw ads for Chatfield Distributors Ltd. (Antiques from China, The “Orient”), Wilder’s Stomach Powder (“Fast, Long-Lasting Relief”) and SX Ham (“Hickory Smoked”). He saw dozens of paintings of products that were no longer made by companies that no longer existed.

He didn’t just take pictures though: Cohen took it upon himself to research the companies, the products, and the names associated with them: J.H. Ashdown, who came to Winnipeg from Minnesota as a young man with an oxcart before building a business empire, appealed to him, as did D.W. and Fred Stobart of Stobart, Sons and Company, workwear manufacturers who splashed the family name on the side of the building they built in 1903 at 281 McDermot Ave.

The companies on the walls likely employed hundreds of Winnipeg residents each, and many would have sold or manufactured hundreds of thousands or millions of products during their existence. Some might have been around for a few years only, their signs outliving the companies 20 times over.

Cohen routinely reaches out to people who remember the companies and products depicted on the walls. He even connected with a man in his 90s who painted the sign for Milady Chocolates on the side of 165 McDermot Ave., talking to him just a few months before the man died. 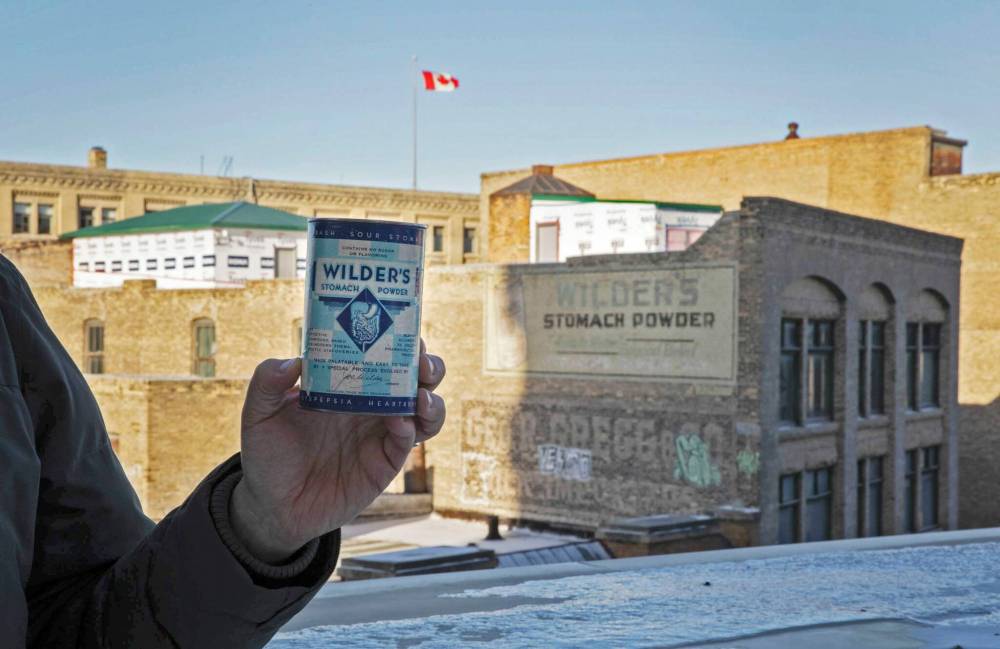 Matt Cohen holds a can of Wilder’s stomach powder, a long-defunct product that is advertised in a ‘ghost sign’ on the side of a building in the Exchange District. (Jessica Lee / Winnipeg Free Press)

These ads and their long lives are a stark departure from modern advertising campaigns. Beginning in the 1960s, as consumerism shifted and more competition cropped up, it became more economically feasible for advertisers to invest in cheaper and faster methods, such as billboards or vinyl banners. Around the same time, expensive porcelain or glass advertising materials were replaced by cheaper materials such as plastic.

Nowadays, ads, especially digital ones, might be made to be used for a single day, a single week, or a single promotion. With shorter ad cycles, these ads will be lucky to be in use for one year, let alone 100.

And now, if a business leaves or closes down, any reference to it is generally removed. You wouldn’t know what once was there unless you saw it yourself. It’s all temporary, which is why the eerie permanence of the fading ghost signs feel so special to Cohen.

Other cities might have a greater quantity of ghost signs, says Cohen, but in the Exchange District, whose buildings are protected by heritage designations, there exists one of Canada’s highest concentration of the wall advertisements.

“You can stand at a corner and see eight or nine if you just pivot,” Cohen says. (Other areas have ghost signs too, but the buildings they are on are normally not protected, so many have been destroyed or painted over.) 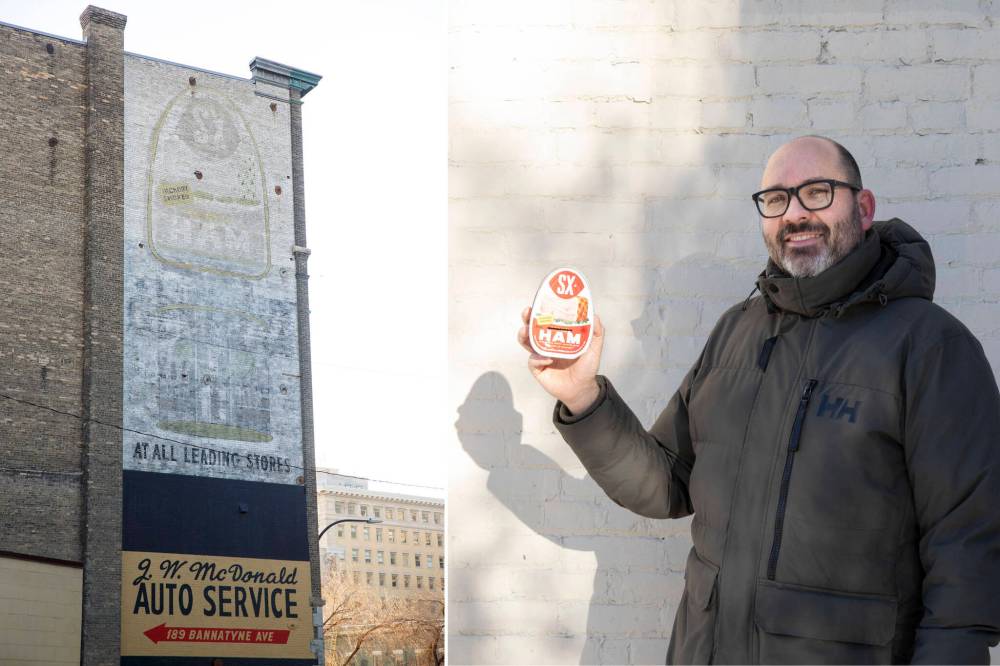 Cohen’s also started collecting the items advertised on the walls, including a can of SX Ham that he bought on Etsy. He has a can of Wilder’s Stomach Powder, and a rubber tire repair kit from Ashdown & Co.

When he helped his grandmother move out of her home a few years ago and found glass cleaner from Robertson & Webber (advertised at 185 Bannatyne Ave.) he “just about lost (his) mind.”

Soon, the book — available for preorder online — will inspire others to get out and walk through the Exchange District looking for ghosts.

As for Cohen, he will keep searching for signs. “And I’m looking for another can of ham, but I haven’t found it yet.”