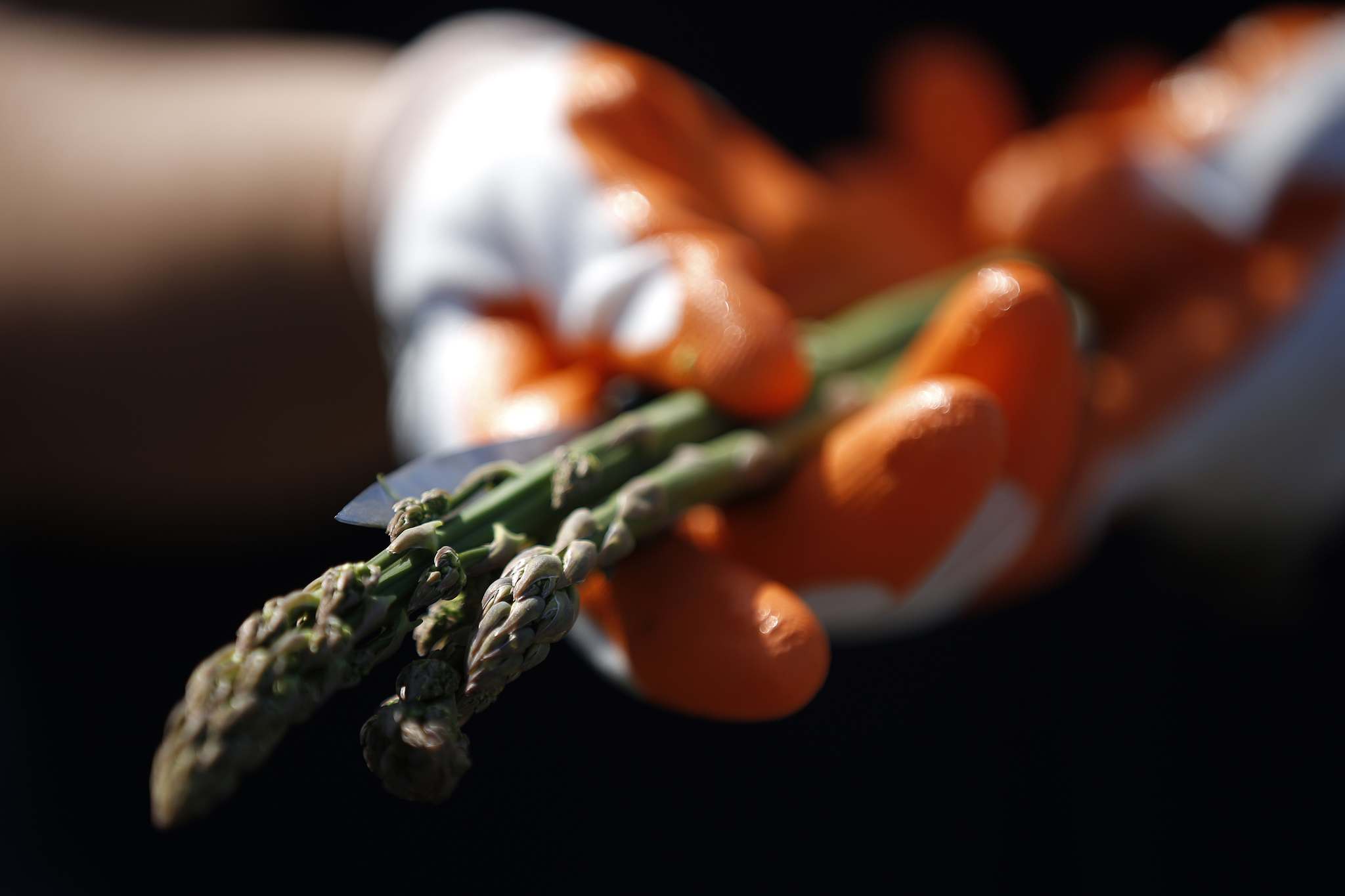 Move over Year of the Ox. The gardeners are taking over.

If the number of people tending plots at community gardens and greenspaces across the city in the past week is any indication, the pandemic-friendly pastime will be as popular in 2021 as it was last year, when Greenhouse Canada magazine declared 2020 the Year of the Garden in its September 2020 issue.

“My yard’s too shady. Way too many trees, so I was never able to grow vegetables there. Vegetables need sun,” she says.

Ediger is one of more than 100 people who grow vegetables at the society’s patch and it has a waiting list of shovel-ready folks looking to join. She remembers the hard work she and her family put in when she first started putting seeds to soil.

“Overwhelming,” she says of the effort. “It had been neglected for a while so it was a lot of work just getting the quack grass out. It was a lot of work but at the time, though, I was much younger, I had young kids and my husband would help, so between the four of us (we made it work).” 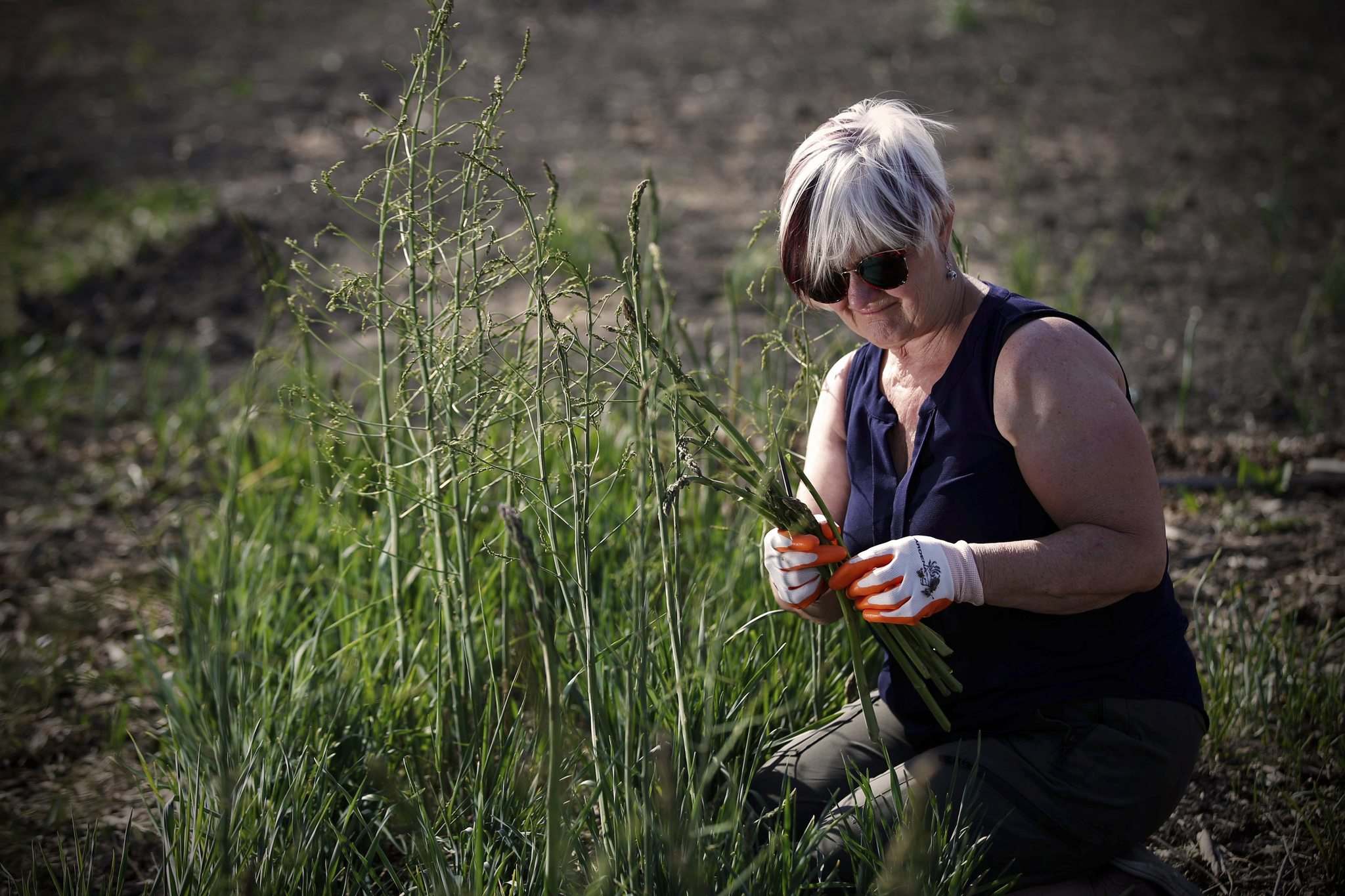 JOHN WOODS / WINNIPEG FREE PRESS
Ediger has had a plot for more than 25 years at the Riverview Garden Society’s space between the Riverview Health Centre and the Red River shore.

She also volunteers with Sustainable South Osborne Community Co-operative, and by doing so she can access the harvest from the fruit and vegetables it and its affiliated gardening clubs grow.

During the early heat wave in Winnipeg on Monday, Ediger was one of several volunteering at the co-op’s nearby orchard, watering the more than 100 fruit trees that stand on both sides of Churchill Drive and its many berry and nut bushes.

“Seven minutes per tree, five minutes per bush,” she says of how much hose time each one received to stave off Winnipeg’s dry spring. The co-op and the society have permission to draw water from the nearby river to fill several giant tanks that members use to water gardens and the trees. 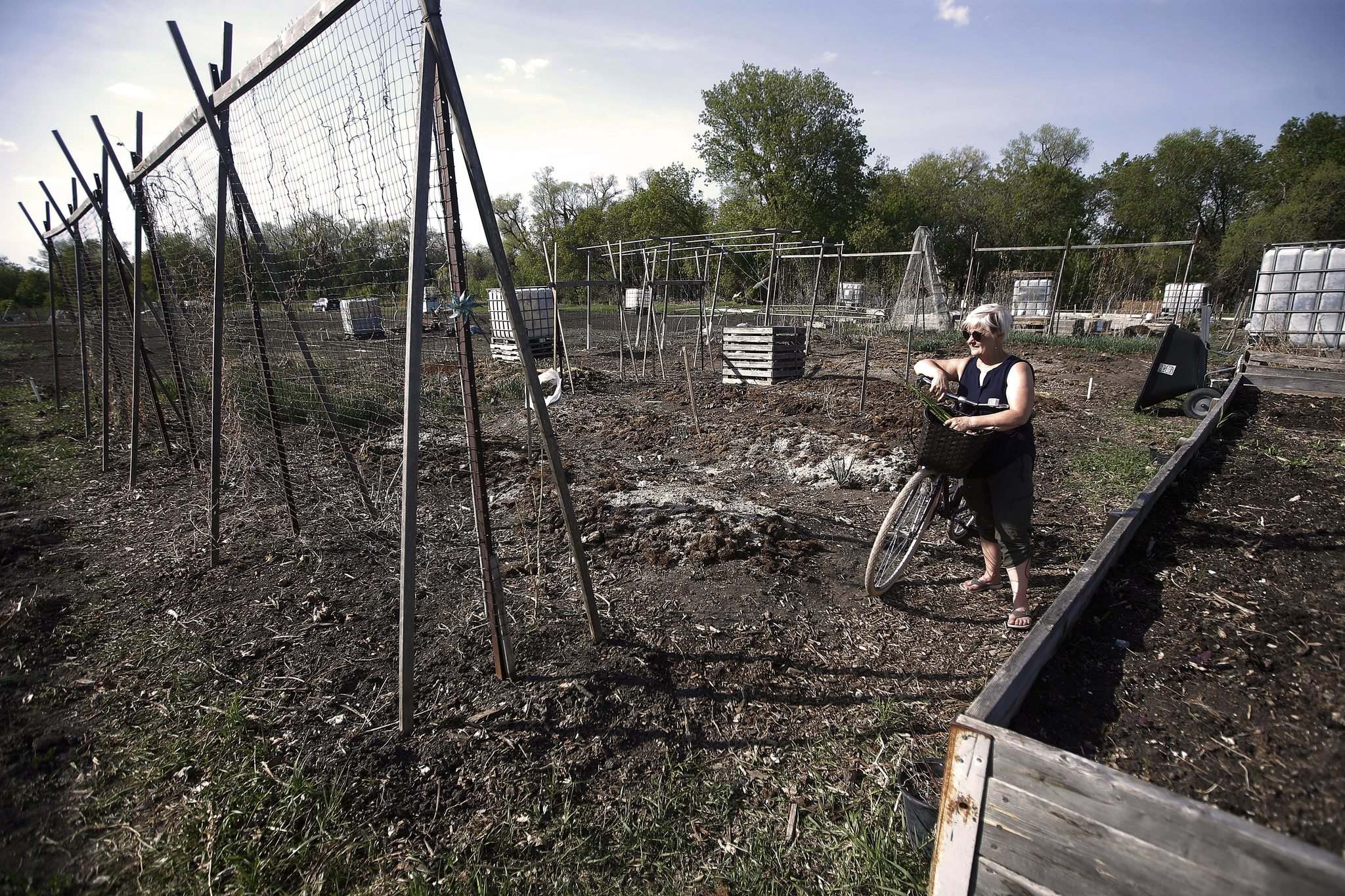 Sustainable South Osborne and the Riverview Garden Society have been responsible for awkward-shaped parcels of land in the Riverview and Lord Roberts neighbourhoods, including the area squeezed between the Red River and Churchill Drive.

Handshake agreements between the city and the two community groups has been the way business has been done for years — Riverview has been operating since the 1950s and the South Osborne co-op since 2009 — but last week they both signed leases with the city to make the relationship official.

The groups signed the deals at picnic tables at the site with Coun. Sherri Rollins, who represents the area on city council. 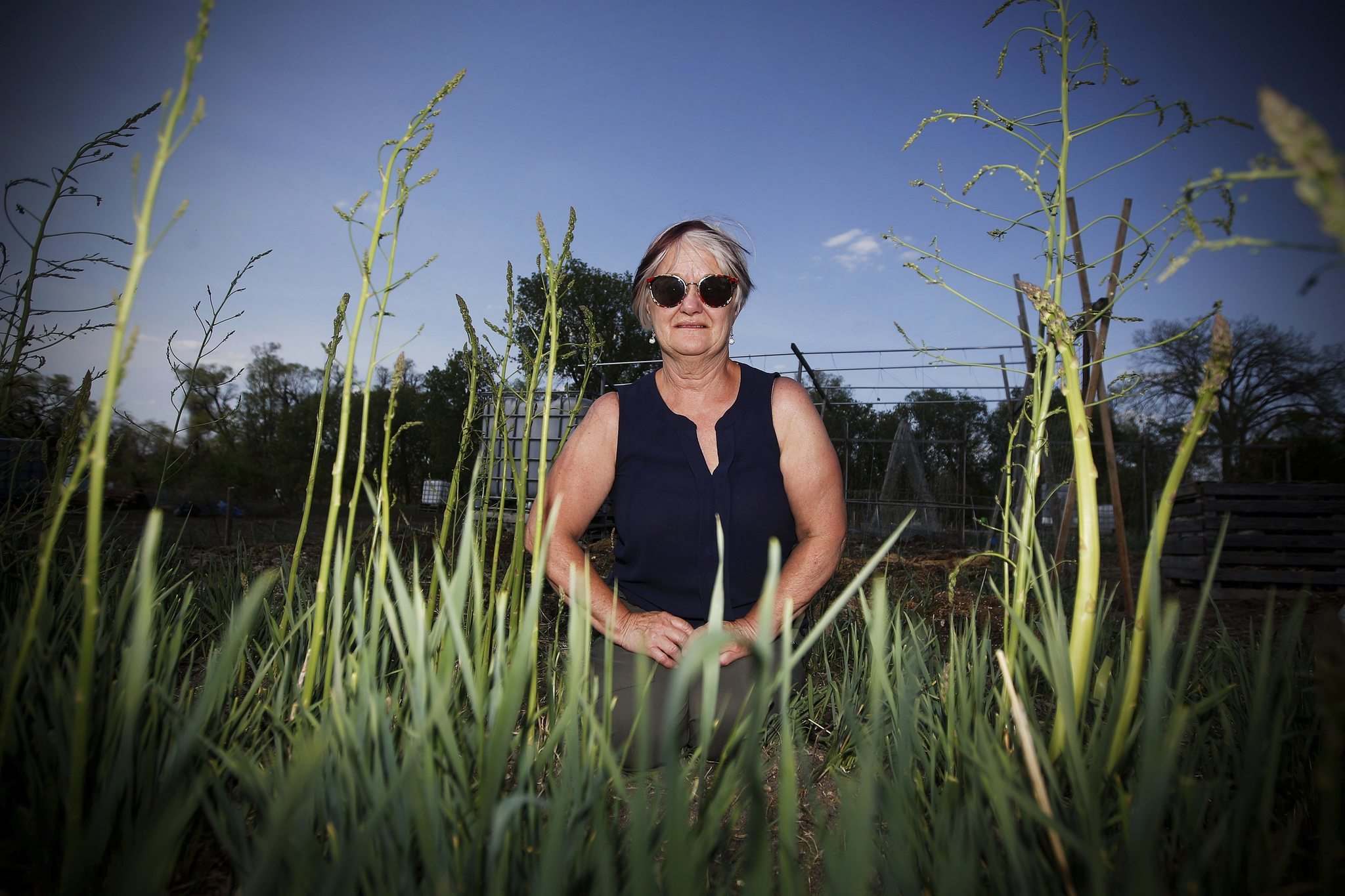 JOHN WOODS / WINNIPEG FREE PRESS
“Last year, we just planted most of our plot in potatoes and donated them to Bear Clan Patrol,” Ediger said.

‘It’s always been with permission with city parks and open space. All the development we did was done through letters of agreement,” says Rod Kueneman, a founding member of the South Osborne co-operative. “About three or four years ago, the city decided these agreements be put into leases.”

The non-profit groups pay $1 annually for the lease and a $250 fee in the agreement, Kueneman says, a sum that can be recouped through plot fees from gardeners, donations or from fundraising events such as harvest dinners.

Coun. Brian Mayes, who is the city’s representative on the Winnipeg Food Council and also chairs the board, believes community gardens are a great way to transform surplus land into a city highlight.

“I used to run out there in the late ‘70s and ‘80s, it was just a wasteland behind the hospital,” Mayes remembers of the Riverview Garden Society site. “It always makes me smile. I still run there but it’s a happening place, there’s all sorts of people out there. It was brought back to life.”

He believes the community aspect of the gardening can be an example for Winnipeg’s newest neighbourhoods to follow and is pushing for garden and greenspace as the city’s footprint expands. Raised garden beds were installed last year beside St. Vital Arena and there are plans afoot to do something similar at West Kildonan arena.

“(There’s been) some progress, but not as much as I’d like,” Mayes says.

Access to water can be a stumbling block, he says, and some community groups, such as the Spence Neighbourhood Association have had some success making agreements with neighbours of its community plots to share rainwater collected in barrels.

“Where we’re not able to come up with those agreements we do have to pay to have water filled,” says Mandalyn Unger, the association’s environment and open spaces co-ordinator. “And as it gets hotter and drier, there’s less rainwater to collect.”

The Spence association cares for nine community gardens in the inner-city neighbourhood, many of which are raised-bed plots that have transformed vacant lots into homes for vegetables and herbs. It also teams up with the Daniel McIntyre community association, the West Central Women’s Resource Centre and 1JustCity on three other gardens. In total, Unger estimates about 30 people or families tend gardens it oversees.

“At the beginning of the pandemic, people were a little spooked but we seem to be regaining that,” Unger says. “There’s a sense of confidence that people can be outside working on the gardens.”

Ediger, the Riverview gardener, is one of those who has continued growing vegetables and volunteering during the COVID-19 pandemic. Meeting with fellow green thumbs and being outdoors keeps her coming back every spring to hoe the earth and every summer and fall to collect the harvest.

“In truth I don’t really need my plot anymore because I get enough vegetables from (volunteering with) Sustainable South Osborne, but now it’s just a force of habit,” she says. “Last year, we just planted most of our plot in potatoes and donated them to Bear Clan Patrol.”

Winnipeg Jets: Fandom extending from Ontario all the way in which to Australia