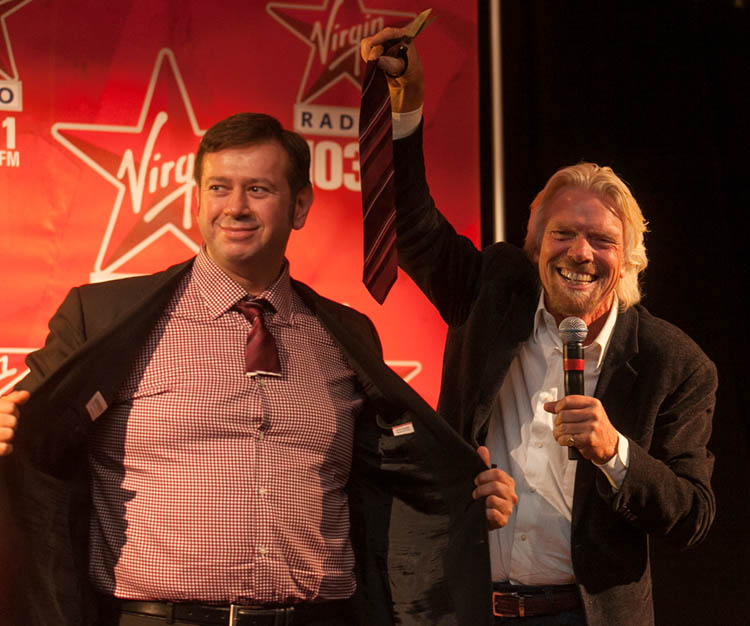 Close to 800 people jammed the main ballroom at the Fairmont Hotel today to bask in the glow of British billionaire Sir Richard Branson.

Everyone from the city’s business elite such as Hartley Richardson, Arthur Mauro and U of M president David Barnard and many more young women than you’d typically see at a Chamber of Commerce luncheon, seemed delighted to spend the midday session listening to the charming Branson kibitzing with Ace Burpee, the morning man at newly branded Virgin Radio in Winnipeg.

Earlier in the day, Branson visited the studios of Virgin Radio (formerly Hot 103).Melissa Tait / Winnipeg Free Press
Sir Richard Branson, Chairman of Virgin Group, holds up the end of a tie he cut from Rob Farina, Executive Vice President of Content at Astral Radio, during Branson’s Winnipeg Chamber of Commerce Q&A at the Fairmont Hotel on Friday. The luncheon and an auction for a week at Sir Richard’s private island helped raise over $300,000 for Resource Assistance for Youth (RaY).

He was also in town to launch a pilot program to put cellular phones in the hands of homeless and at-risk youth.

According to the Sunday Times newspaper Branson is worth $5.4 billion, with his Virgin Group empire stretching across more than 200 companies in over 30 countries including Virgin Atlantic airlines and Virgin Mobile that operates around the world.

Ostensibly, the Chamber of Commerce event was staged to raise money for RAY (Resource Assistance for Youth) a Winnipeg social service agency that works with youth in distress. 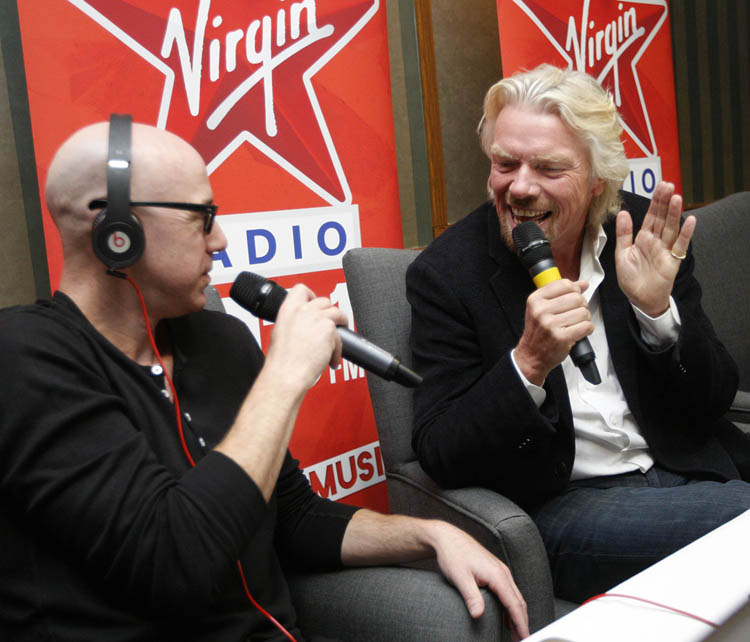 And it was a roaring success, with Winnipeg’s business elite digging into their pockets and raising more than $300,000 for RAY.

The charming billionaire with the famously big smile and golden locks served up the renegade entrepreneur goods and the audience lapped it up.

He snipped off the Armani tie of one of his Canadian radio executive in a demonstration against the confining symbolism of the neck tie, spoke out on legalizing marijuana and fulfilled the wishes of a couple of smitten women in the audience with a couple of kisses.

But many were there to soak up some of the business brilliance that has seen him take on some the largest industrial conglomerates and win.

Justin Trudeau will get a grilling from Winnipeg elementary college…

Ashok Dilawri, owner of the Dilawri Group of automobile dealerships, said, “He is an entrepreneur extraordinaire. I just wanted to see him and hear what he had to say.”

Branson also unveiled “Phones for Change” Thursday through Virgin Mobile Canada and Virgin Unite, two subsidiaries of the Virgin Group, an international giant that he founded.

Phones for Change will work with Resource Assistance for Youth (RaY) in Winnipeg and Vancouver’s Broadway Youth Resource Centre to give young people access to phones and monthly plans while educating them on the importance of financial management and how to escape the cycle of debt.

“With at-risk and homeless youth having so much to go without, a mobile phone is more than just an accessory, it’s their lifeline to employment and services,” Branson said.

Youth nominated by each organization will receive a Virgin Mobile phone. The pilot will run for one year in Winnipeg and Vancouver with the goal of expanding to other cities in 2013.

The Free Press was with Branson all day. Watch his Q & A at the Winnipeg Chamber of Commerce luncheon below.

— with files from staff