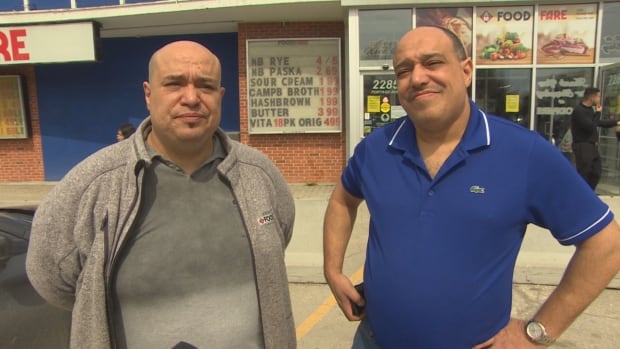 Provincial officials and police visited a handful of grocery stores across Winnipeg Friday morning, warning them they would face a fine and be shut down if they opened their doors on a statutory holiday.

The move didn’t sit well with Food Fare manager Ramsey Zeid, who put up a sign in the window of his Maryland Street and Westminster Avenue location, asking would-be customers to call the province and complain.

“It’s pretty sad that they’re tying up Winnipeg police resources with all the other crimes going on and apparently there’s a meth crisis in our city,” said Zeid.

“But we can tie up Winnipeg police to come close down a small business that’s selling groceries?”

Winnipeg Food Fare locations posted signs in their windows asking customers to complain to the province about the law. (Travis Golby/CBC)

Zeid said all five Winnipeg Food Fare stores were ordered closed by officials who visited the location at Portage Avenue and Burnell Street just after 10 a.m. while they were preparing to open.

“We were approached by a gentleman from Employment Standards along with a police officer saying that we are not allowed to open today and if we do open we could face a fine between $1,000 and $10,000 and would be shut down,” he said.

“We had staff [who] volunteered to work and they were all going to get double time, they were excited for the extra money, a lot of them are students,” he said.

Zeid said officials from the province warned the local grocery chain of the fines for the first time last Good Friday, but the stores stayed open, and they never ended up being fined.

They were excited for the extra money, a lot of them are students.– Ramsey Zeid

A spokesperson for the minister of Growth, Education and Trade told CBC News Food Fare was among 14 grocery stores that were “educated on the act” leading up to Good Friday.

“Employment Standards Officers are enforcing this act in cooperation with the Winnipeg Police Service.”

According to the province’s website, businesses including restaurants, gas stations, drug stores, “fresh fruit” stores, and stores that normally operate with fewer than four employees are allowed to open on holidays like Good Friday.

‘Interfering in an individual’s rights’

Customers like Mary Chang, who stopped at the Food Fare store at Portage Avenue and Mount Royal Road Friday afternoon, were not impressed with the crackdown.

“The province has no business interfering in an individual’s rights,” she said.

“If they want to stay open, it’s their business … If the proprietors choose to stay open, I give them all the support that I possibly can.”

Customer Greg Burda questioned why other businesses are given the green light to stay open, while independent grocery stores are forced to close. 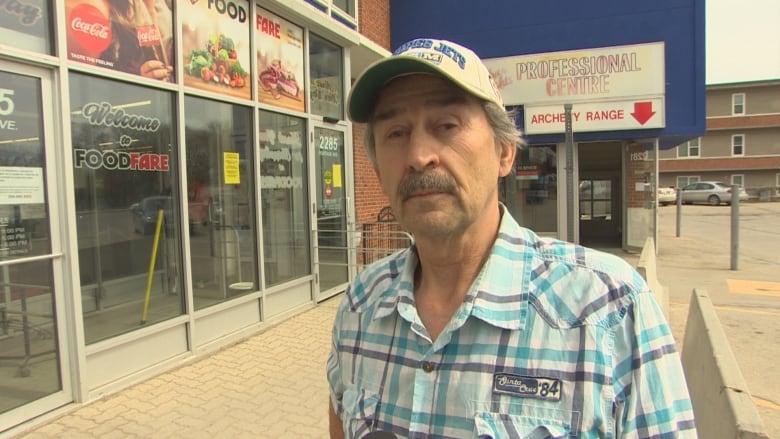 “The sad part is when they can open up the casinos 24-7 on the weekends and the holidays — that’s totally wrong — and selling weed, same thing,” he said.

“Good citizens, good people who have stores like this should be able to have their business open.”

‘We’re a little behind’

Brent Retzlaff was so surprised to find out the West Broadway Food Fare location closed on Friday, he decided to send an email to Employment Standards.

Retzlaff, who is Christian, questions why grocery stores are forced to close for religious holidays like Good Friday, but are allowed to stay open on important days for other religions.

“Most provinces the rules are such that businesses that want to be open can be open and they pay their employees the time-and-a-half that they’re owed for working a stat holiday,” he said.

“It seems like in Manitoba we’re a little behind when it comes to that rule, and it would be nice to have a conversation around whether that’s where Manitobans want to be.”

Zeid said he hopes the province ultimately decides to change the laws.

Greatest Cities to Put money into Actual Property in 2023