This striking visual pairing — an 1821 watercolour by Swiss-born artist Peter Rindisbacher set next to a recent photo taken at the same bend of the Assiniboine River — was originally tweeted by @WardlowAvenue. It has since gotten some play on local social media, being retweeted by the Manitoba Museum and the Winnipeg Architecture Foundation.

These side-by-side views are a fascinating confluence of past and present, as two scenes from Manitoba history come together across a 200-year gap.

The side-by-side views of Manitoba history come together across a 200-year gap.

Sometimes called the “boy artist,” Rindisbacher sketched and painted from a young age. His family, lured by Lord Selkirk’s promises of a new life, emigrated to the Red River Settlement when Peter was 15.

Arriving in the winter of 1821, Rindisbacher began making detailed observations of the daily lives of settlers and Indigenous peoples. Depicting merchants, colonial officials and Métis fur traders, he was able to supplement his family’s income with his art.

Rindisbacher later moved to St. Louis, Mo., where he died, possibly of cholera, at the age of 28. In an obituary tribute, the Missouri Republican wrote: “Mr. Rindisbacher had talents which gave every assurance of future celebrity. He possessed a keen sensibility and the most delicate perception of the beautiful.” 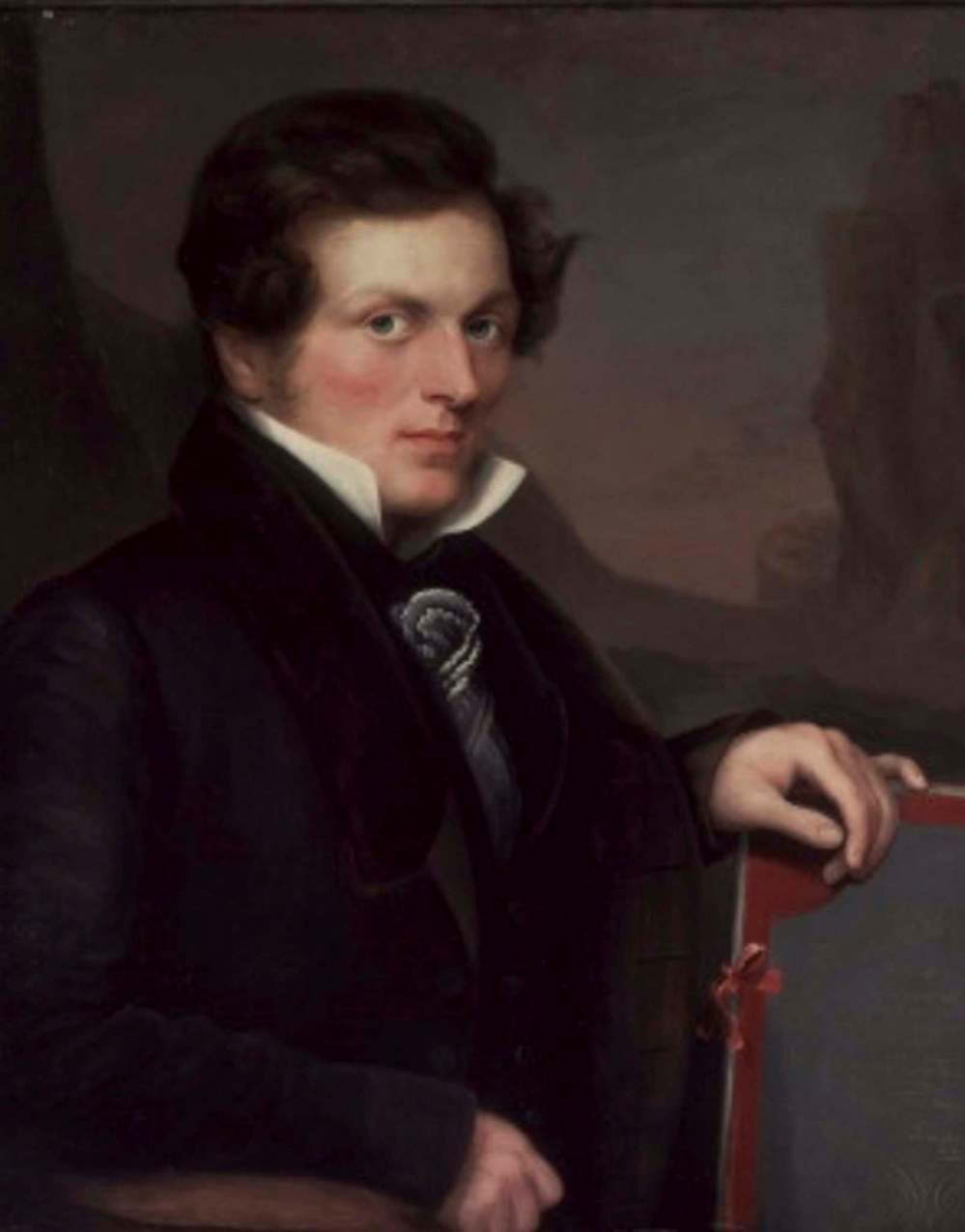 His art was marked by an obsessive rendering of the smallest details (in Europe, he had some training as a miniaturist). Some of his works may have used a camera lucida, an optical device that assisted in the accurate representation of the physical world. His careful pen and ink drawings and watercolours have been used in historical reconstructions of the buildings, clothing and objects of early 19th-century life in the Red River region.

The clarity and immediacy of Rindisbacher’s style make it tempting to view his works as a straight-up documentary record. In a 1949 article, historian John Francis McDermott called Rindisbacher a “Frontier Reporter.”

When the 1821 river scene is expanded, we can see ice-fishing nets, hungry dogs converging on some recently caught fish, a horse pulling a sledge, scattered groups of people. This is a completely recognizable picture of a Manitoba winter day, with long blue shadows on the snow, scudding clouds and bare tree branches standing out against the sky.

Some recent scholars suggest this sense of absolute realism can be deceptive. As historian and curator Laura Lynn Peers has written: “However detailed Rindisbacher’s art was, it was never an objective or neutral recording, nor was it simply what he saw around him.” These works were formed by esthetic decisions about colour, line and composition.

Rindisbacher also created multiple depictions of popular “New World” subjects, such as bison hunts, that played to a commercial European market hungry for images that reinforced the mythology of an “exotic” and untamed Empire. Some of Rindisbacher’s works were commissions for Hudson’s Bay officials who wanted souvenirs to take back home. 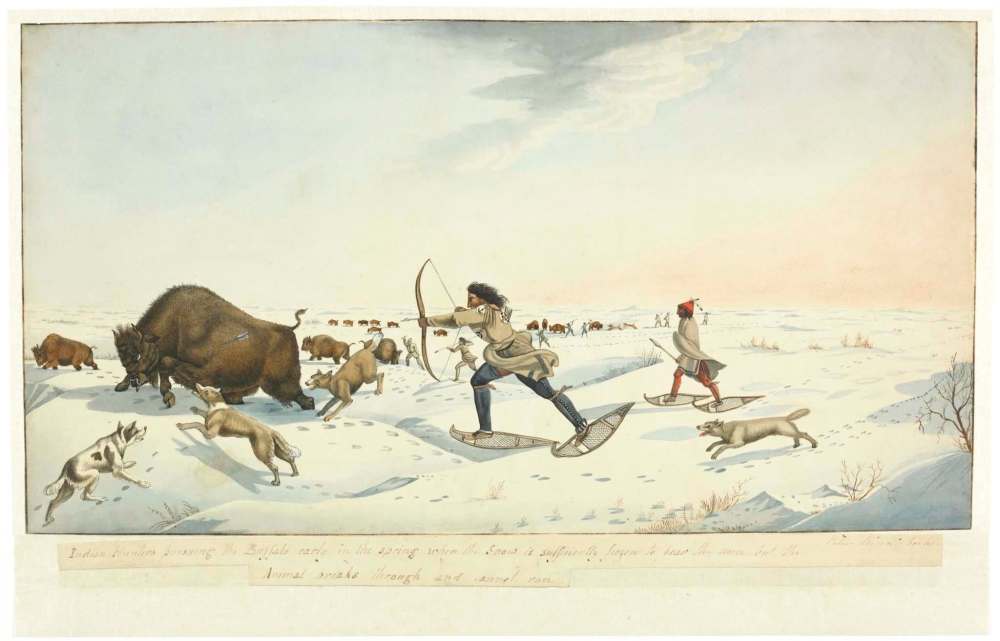 Adele Perry, a professor of history at the University of Manitoba, understands the appeal of putting the two images — 1821 painting and 2021 photo — together. “First of all, people love ‘before and after’ pictures,” she says.

More importantly, for Perry, the images emphasize The Forks’ long history as a meeting place.

Rindisbacher’s works “give us a sense of Winnipeg as a historic and ancient place, which it is,” says Perry. “But that isn’t always conveyed by the conventional settler focus on built heritage — fancy houses and castles, etc. — as the only or best markers of historical importance.

“A lot of European fine art images of North America focus on the landscape. They’re settler images of the land that don’t register them as places where people lived and worked,” Perry points out. “Rindisbacher gives us a sense of the Red River as a prosperous place, a prosperous Indigenous society.”

The 1821 piece “gives us a way of seeing the history of this place with people in it,” says Perry.

For Oliver Botar, an art historian at the University of Manitoba’s School of Art, “this juxtaposition of images of The Forks in winter really gives us a sense of the continuity of settlement in the Red River Valley.” 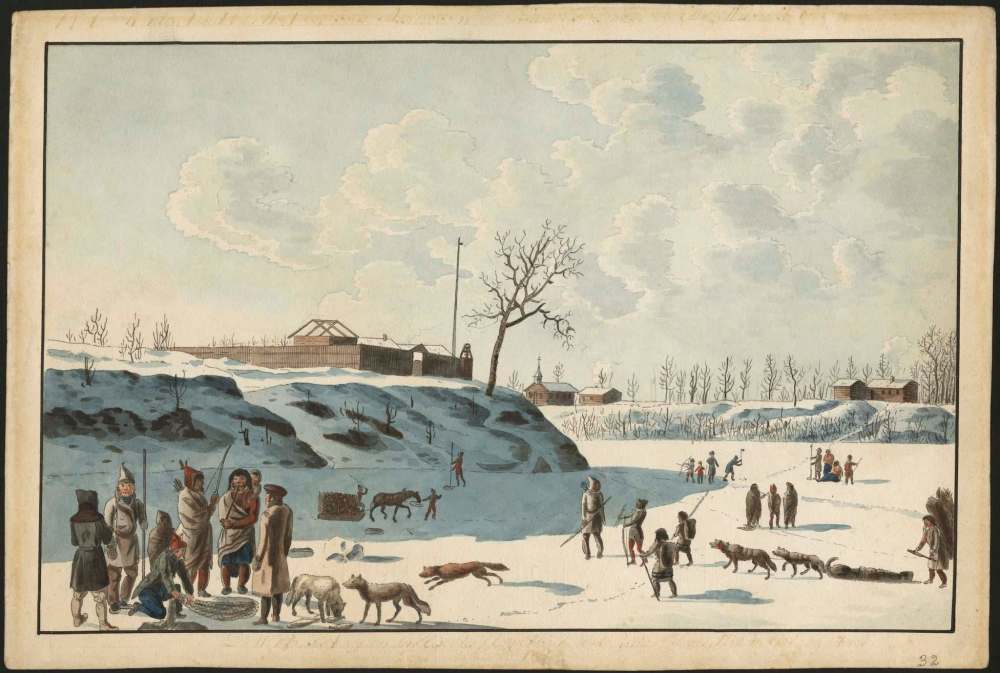 According to Botar, the two images demonstrate how we think of “the frozen rivers in terms of utility, though nowadays it’s not so much for fur trading, the hauling of wood, but rather for purely recreational purposes.”

Botar also sees parallels in the ways these images are used, even though they’re dated 200 years apart: “While the earlier image was painted for a patron (perhaps the Rev. John West), in its time, it served a similar function as the photograph posted to Facebook does today: to act as a record of activity, a record that one might share with family and friends.”

That human activity is a crucial part of the pairing’s appeal. It’s satisfying to match the curve of the riverbend and the slope of the bank in the two images. But what’s really reassuring is that two centuries later, we see people still gathering on the river ice — skating, walking, pushing strollers, checking their phones, exploring some of our city’s Warming Huts.

In the middle of what feels like a very long and isolated winter, these two pictures remind us that we are connected to this place and its history.