Pot, parkas on agenda as prime minister stops in Winnipeg 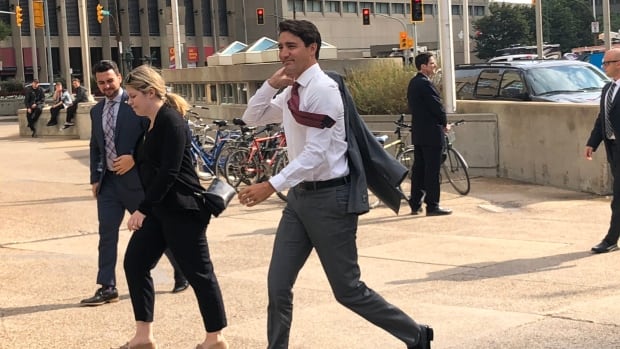 The new facility for the winter clothing manufacturer, on Mountain Avenue in the Inkster Industrial Park, will bring as many as 700 jobs to the city, Trudeau said in a telephone interview Tuesday morning with CBC’s Information Radio.

“And more importantly, the 700 jobs are in the North End of the city, where we know there are economic challenges, so this is a really good piece of news for Winnipeg,” he said.

The announcement validates his government’s approach to the economy, with the signing of big trade deals with Europe and Asia benefiting companies like Canada Goose, Trudeau said.

The prime minister arrived in Winnipeg Tuesday morning, starting his day with a tour and announcement at the new plant, which took place at 1 p.m.

Pallister and Bowman also took part in the afternoon announcement. The Manitoba government is contributing up to $1.48 million for the new plant, which will go toward costs related to the training of the new sewing machine operators over three years.

Trudeau also planned to visit a seniors’ home in West Kildonan, go to a Liberal fundraiser at the Fort Garry Hotel and stop at the Manitoba Legislature to meet with Pallister Tuesday afternoon.

In an email, a spokesperson for Pallister said the premier planned to discuss interprovincial trade and NAFTA, carbon pricing, health-care funding and cannabis legalization with Trudeau.

When it comes to cannabis, Manitoba and Ottawa don’t seem to be buds.

Manitoba recently published a list of fines for specific pot-related offences just weeks ahead of Oct. 17, when the federal government will legalize recreational cannabis use.

While Trudeau’s government has pushed to have small amounts of homegrown pot allowed, Manitoba has slapped down a fine of $2,542 for anyone who grows it at home.

“There are going to be issues we disagree on and that’s going to be going towards the courts. We truly believe that allowing people to grow a small quantity at home for personal consumption is a part of removing the black market and keeping our communities safe,” Trudeau said.

“The province has picked a different path and we’re going to see how we work that out.”

After his tour of the new Canada Goose plant, Trudeau was also asked about Pallister’s plan to go ahead with a flat-rate carbon tax of $25 per tonne, despite the federal government’s insistence that provinces implement a plan to charge $50 a tonne by 2022.

The feds have said they will impose the higher rate on any province that doesn’t match it.

Trudeau said he was pleased to see the premier recognizes the need to fight climate change.

Pallister understands “that putting cost on pollution is one of the best ways to move forward and create efficiencies in our economies while being able to support people through this time of transition to more renewables,” the prime minister said.

“To see a leader, indeed a Conservative leader, who understands the need to have a concrete plan that fights climate change, and takes real action that is going to be in the best interest of Manitobans right now and in businesses in the years to come, is something that I very much welcome.”