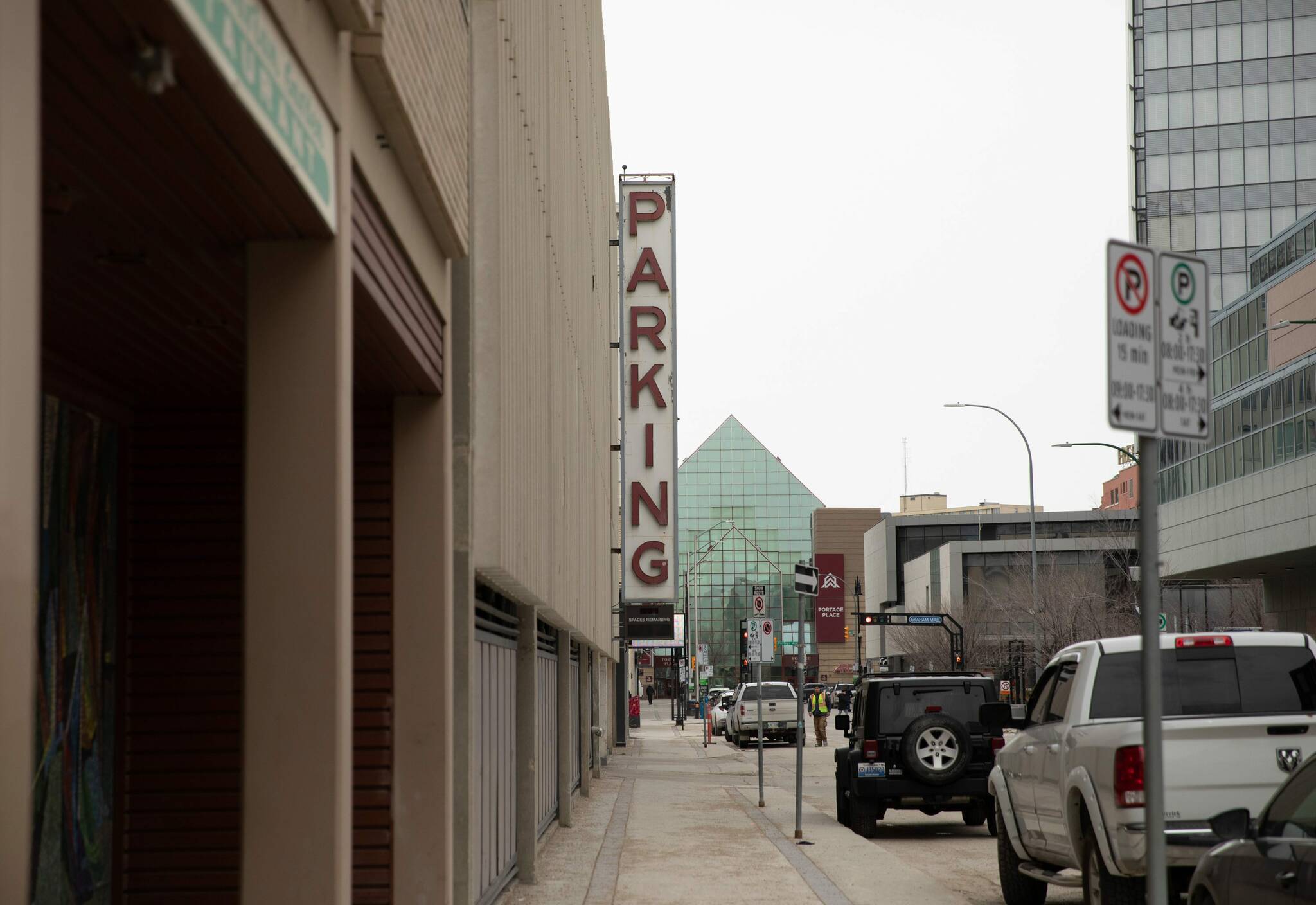 Known to generations of Winnipeg drivers as convenient, if slightly pricey, places to park their vehicles, parkades have the particular distinction of originating in Winnipeg.

To be clear, it’s not the ginormous concrete-and-steel parking structures that stack cars on multiple levels that are Winnipeg- famous. Instead, it’s the moniker “parkade” that was invented here.

“It’s a combination of (the terms) retail arcade and parking lot,” explains history researcher and writer Christian Cassidy of the name coined for the city’s first downtown parking garage at 285 Memorial Blvd., connected to the Hudson’s Bay Company store.JESSICA LEE / WINNIPEG FREE PRESS
Parkades with street-facing concrete walls, such as the Medical Arts Building’s, create voids in downtown space and are a safety concern for pedestrians.

Cassidy plans to include that fact about Winnipeg’s unique name for parking garages, as well as dozens of tidbits and back stories about the city’s first five parkades, in a two-hour walking tour 1:30 p.m. on Saturday, April 9, and Saturday, April 23. Part of Design Month sponsored by Winnipeg Architecture Foundation, the tour from Memorial Boulevard to Smith Street will explore some of the quirky features of early multi-level parking in this city.

For instance, parking fees at the new Bay Parkade, which opened with just two levels on Oct. 29, 1954, were significantly higher than nearby street parking, which then cost just a nickel for an hour. The new parking structure at the south end of the store charged drivers five cents for the first 30 minutes, and 10 cents for each subsequent hour or portion thereof.

Shoppers purchased convenience and proximity with that fee, since they could load up their cars just steps away from the back doors of the store instead of traipsing down the street with their packages, says Cassidy. 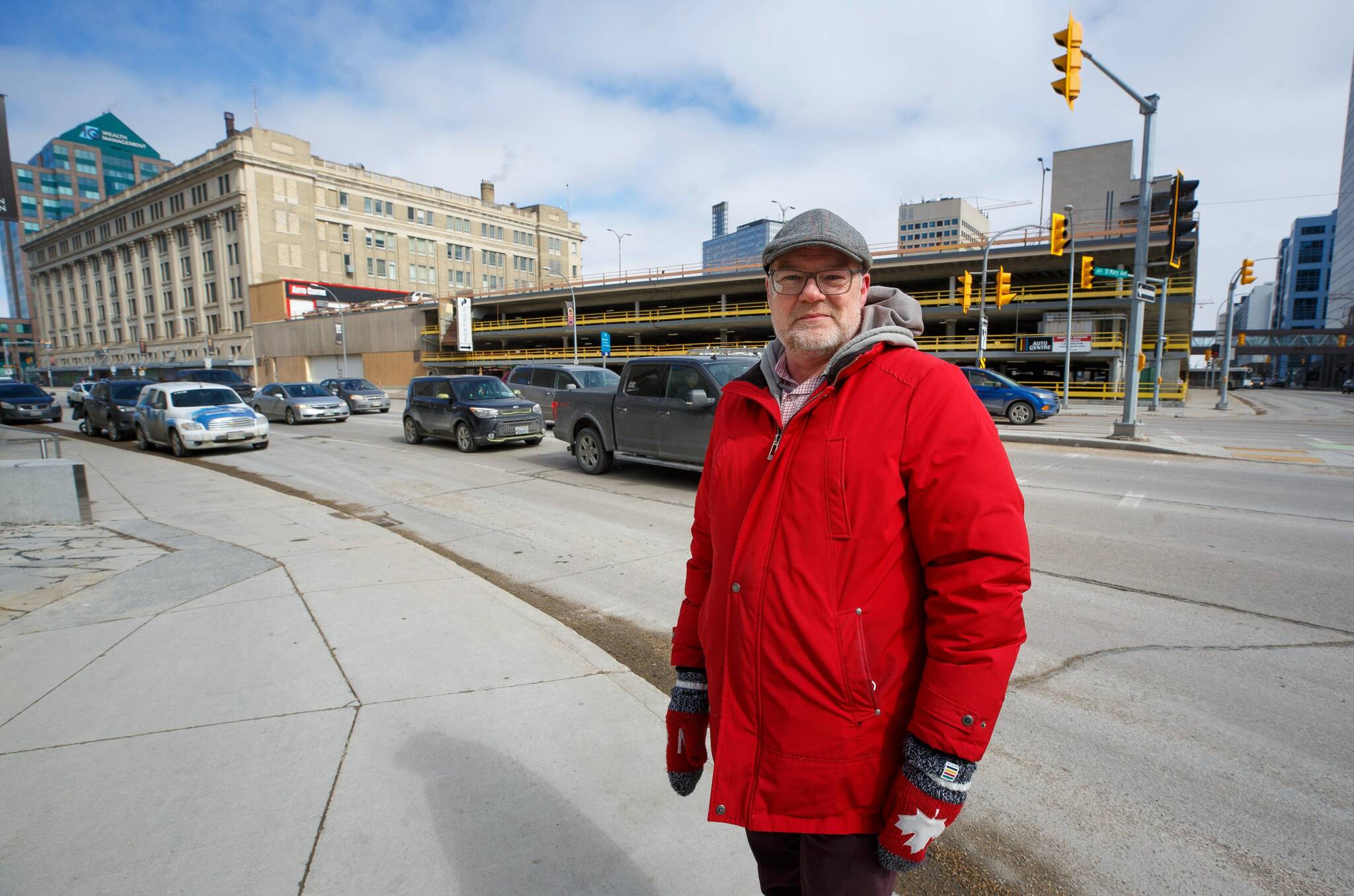 Winnipeg’s first parkade proved so popular that two additional levels were added in 1955 and 1964, all featuring the same spare, modern lines, contrasting with the ornamental Beaux Arts design of the department store.

“It has a function and its function is completely on display,” said Cassidy, pointing out the utilitarian horizontal railings and open sides of the concrete and metal structure that covers nearly half a city block behind the now-shuttered department store.

“There’s nothing decorative or fancy about it.” 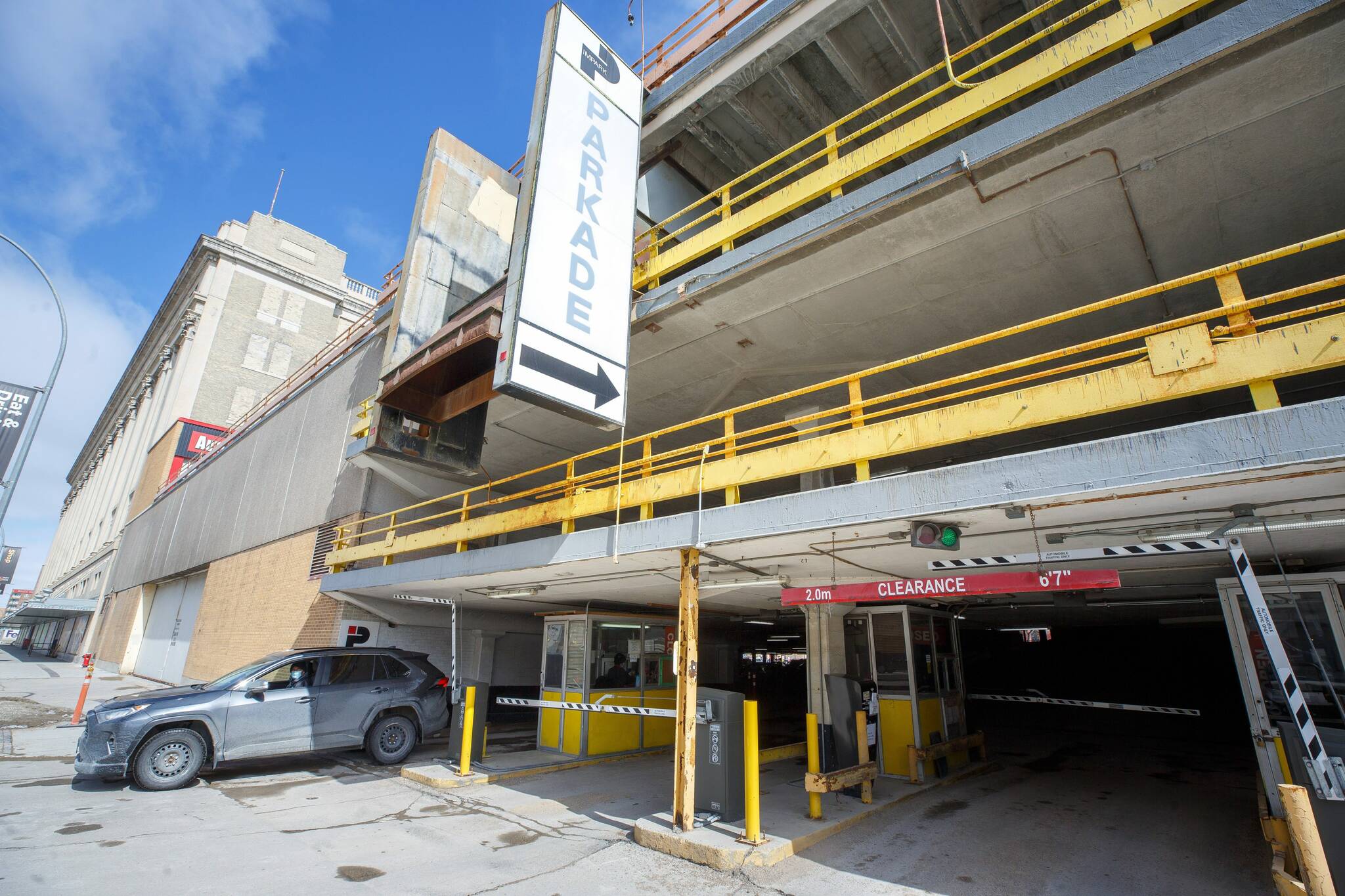 MIKE DEAL / WINNIPEG FREE PRESS
The Bay Parkade, which opened in 1954 behind the iconic store on Portage Avenue, was the city’s first.

Contrast that to the parking garage at 218 Edmonton St., connected to the Medical Arts building, which sports vertical concrete fins on the exterior, partially obscuring the vehicles inside, says Cassidy.

“They tried to give it an office building kind of look,” he says of the 1961 six-storey structure with 386 parking spots.

“They tried to camouflage it, but it only works if you’re driving by.” 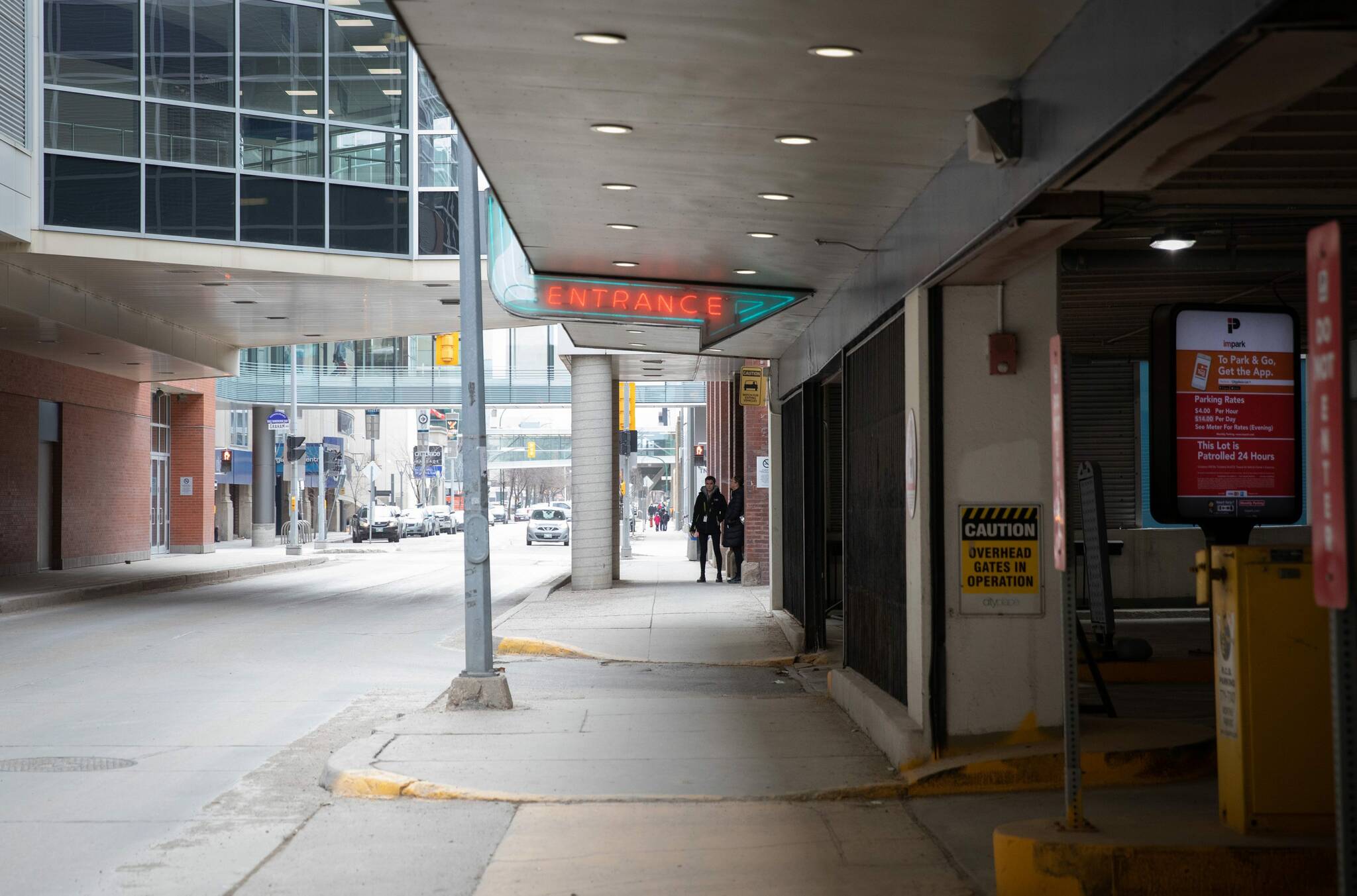 JESSICA LEE / WINNIPEG FREE PRESS
Built before the city had even contemplated rules for parking structures, the CityPlace lot on Hargrave Street typifies why the city needs regulations.

Viewed individually, the five parking garages included in the tour might not generate much interest to passers-by, admits Susan Algie, executive director of the Winnipeg Architecture Foundation, which added a second tour on April 23 after the first one sold out.

“Each of those parking garages alone isn’t interesting,” she says.

“The tour also tells the story of the city from the perspective of parking.” 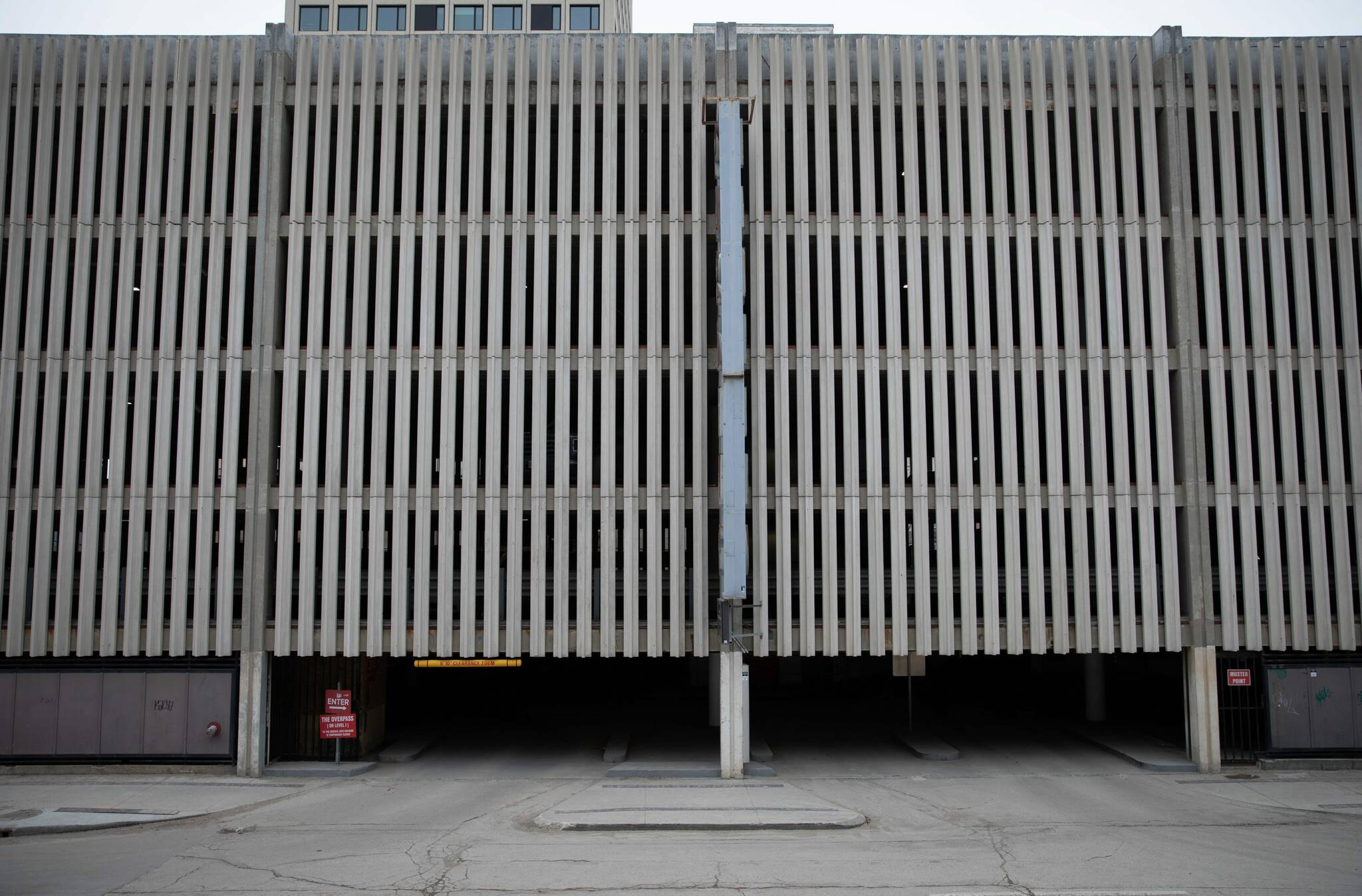 One of those stories might be how the city’s first parkade includes a staircase at the corner of Vaughan Street and St. Mary Avenue, allowing people to leave the structure without entering the store, says Cassidy.

“Most of the parkades on the tour are built for the building and to funnel people into the building,” he explains.

“But this one has access to the wider community.” 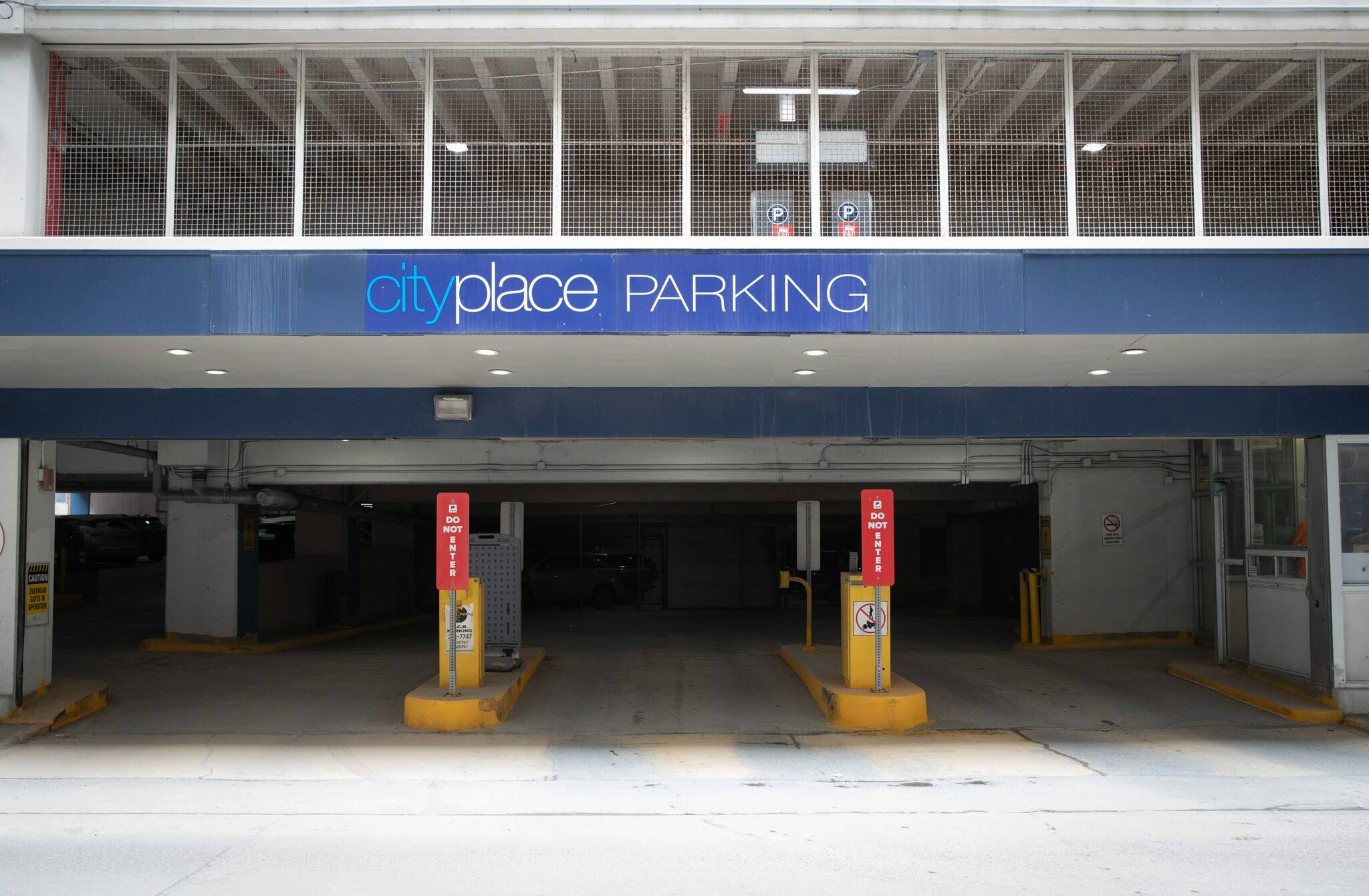 JESSICA LEE / WINNIPEG FREE PRESS
Across from Canada Life Centre is a parkade built to service the former Eatons store on Hargrave Street.

That’s not the case for the T. Eaton’s parking garage at 250 Hargrave St., now known as Cityplace Lot 1. Constructed in 1956-1957 on the former women’s parking lot, this six-storey structure was connected to the now-demolished department store at the basement and third floor.

“They tucked it right close to the store,” says Cassidy of the multi-level garage squeezed into a relatively small footprint; it included an elevator, washroom and spiral exit ramp.

Across Portage Avenue, another 1950s-era parking garage boasted automated features that would eventually lead to its demise. Constructed in 1957 at an estimated $1 million, using technology new to Canada, the Marlborough Hotel Parkmaster was equipped with an automated system to lift and move cars. Drivers would leave their locked cars on entry aisles and then the parking attendant would guide the car to an empty cubicle by means of conveyors, turntables and elevators. 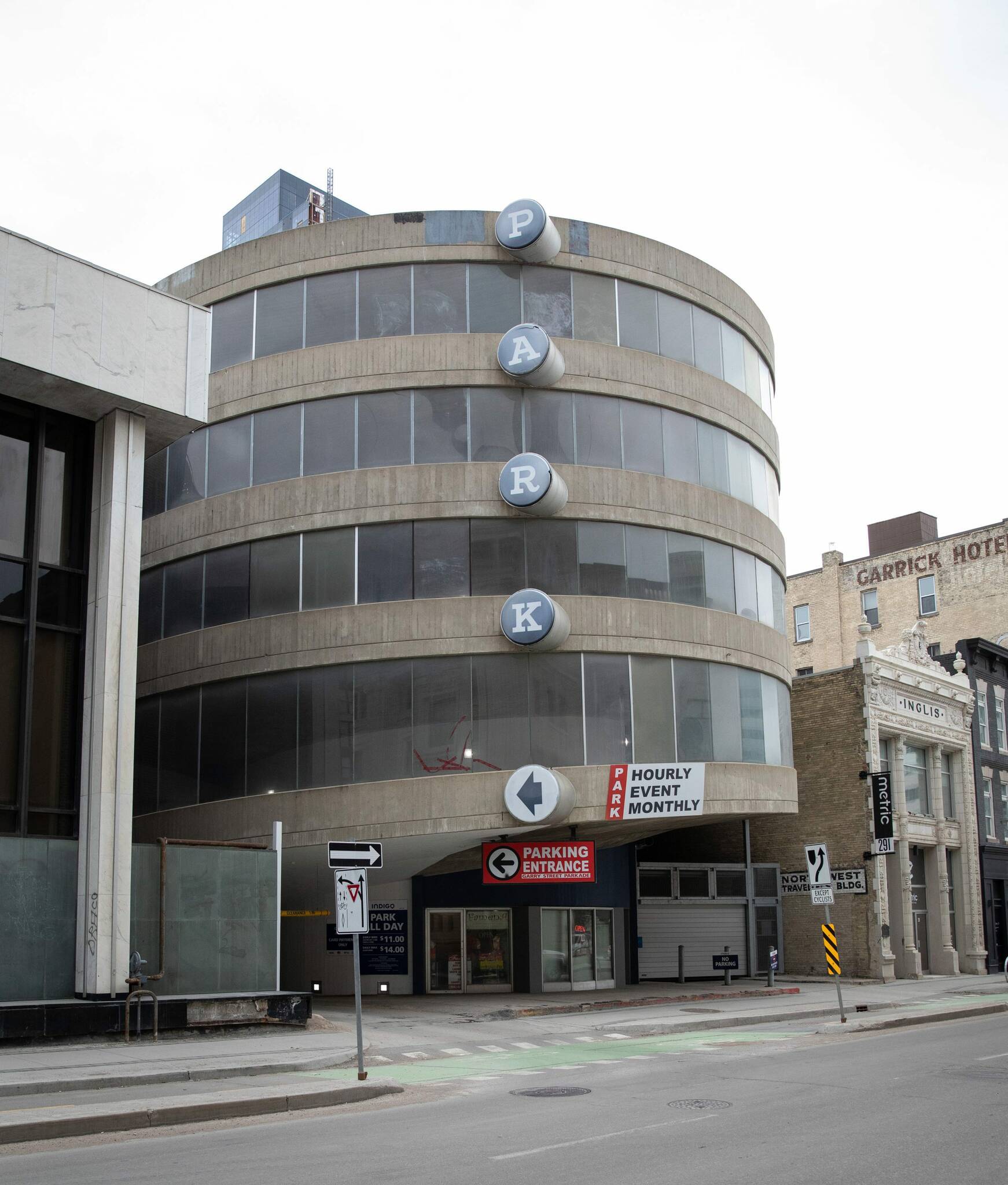 JESSICA LEE / WINNIPEG FREE PRESS
The parkade on Garry Street at Portage Avenue should be a model for future parking structures, disguised with street-level retail.

The attendant would do the reverse when the driver returned, bringing the car down in less than a minute, says Cassidy, but that wasn’t quick enough if a crowd had gathered at the end of day.

“It worked well if you have people trickling in or out all day, but for an event or conference it just wasn’t working,” says Cassidy of the automated parkade, demolished in 1967.

Intended to move hundreds of cars from the suburbs into the downtown, these three early parkades created 1,700 spots in just three years, says Cassidy, demonstrating how car culture pervaded the development of the downtown.

In 2022, Winnipeg has only 12,864 spots in indoor parking structures, including the 480 spaces at the City of Winnipeg-managed Millennium Library underground parkade. In total, the downtown area has about 21,000 paid parking spaces in surface lots, parkades, and metered parking.

Providing more space for cars unintentionally creates worse conditions for people walking the sidewalks near the large parking structures, says architect Brent Bellamy of Number Ten Architectural Group. With no storefronts at street level and few, if any people watching the street from inside the parkade, huge parking garages butting against the sidewalk created unsafe environments for pedestrians, he says.

“It kills the quality of the street, the environment, the numbers of pedestrians,” says Bellamy, also chair of CentreVenture Development Corp.

“Every city that has parkades creates a pedestrian dead zone.”

One way to counteract the dead zone is to include office space, residential units, or retail at the street level and move the cars further inside, says Bellamy. A good example of an early structure that does that well is building at 238-246 Portage Ave, initially named the Dreman Building, which combines street-level retail space, an office tower and a parking garage for nearly 300 cars.

“That’s the perfect example of designing one that fits in,” says Bellamy of the multi-use building constructed in 1962-1963 for $1.85 million.

“You could walk by and never know it’s a parkade.”

Bellamy believes the future of downtown parking needs to follow that example of integrating other functions into a parking structure. Right now, the city prefers that parkades don’t face the sidewalk at the ground floor, but he would like that to become the standard practice.

“I would like to see a hard bylaw that says no exposed parking downtown.”

Currently, the City of Winnipeg is working on a parking strategy alongside a transportation master plan, to be released next year, said a city spokesperson.

But back in the 1950s, the city didn’t have a parking strategy, leaving businesses to construct structures — and figure out a new name for them — while ultimately also reconfiguring the shape of the downtown.

“It was the first two retailers who cashed in while the city was figuring out what to do,” says Cassidy, referring to the parking structures at the city’s two big department stores.