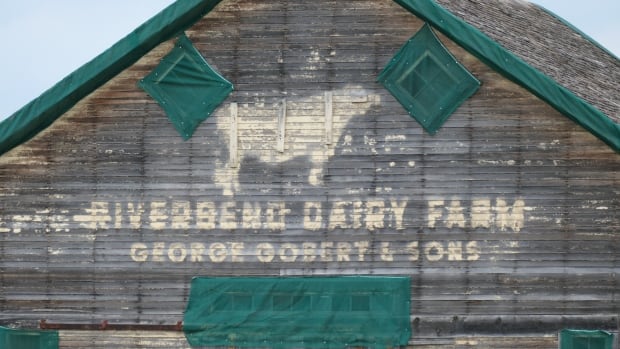 The pale yellow paint, protected from the elements for decades under plywood letters, is fading on the 90-year-old weathered-grey dairy barn at the south edge of Winnipeg.

Soon the Riverbend Dairy Farm barn and the neighbouring two-storey house will fall under the advance of a bulldozer and development.

“You know, it’s progress, so you’ve got to accept it,” said Lillian Gobert, the family matriarch, who lived at the St. Mary’s Road property for 68 years until she was forced to leave in May 2021.

Built in 1932, the farm was a rural outpost for many years, surrounded by a smattering of other farms and market gardens.

Now the city has crept up to the farm, with the River Park South neighbourhood shouldering against it.

For safety, due to increased traffic in the area, the nearby intersection of St. Mary’s Road and the Perimeter Highway is getting a new interchange.

The once thoroughly rural property is at St. Mary’s Road and the Perimeter Highway, where the city now needs to build an interchange. (Pat Kaniuga/CBC)

The farm now happens to be in the way and the property has been expropriated.

“I got taken away because of the new expansion,” said Gobert, 87, who now lives a few miles east of the old homestead.

She moved to the farm in 1954, when she was 19, after marrying R. George Gobert. They raised four kids — three sons and a daughter — while entertaining school groups on field trips, customers buying fresh milk and bundles of relatives and friends.

“I always loved having people stop by and have a cup of tea or lunch or whatever. It was just like a main station and a lot of people just dropped by,” Gobert said.

Much of the property was shrouded by trees, creating a paradise behind that green screen, where the Gobert kids and their cousins and friends played, drove dirt bikes and lived around animals.

There was even a grass landing strip just north of the farm, called Gobert’s Field, which R. George used for crop dusting. 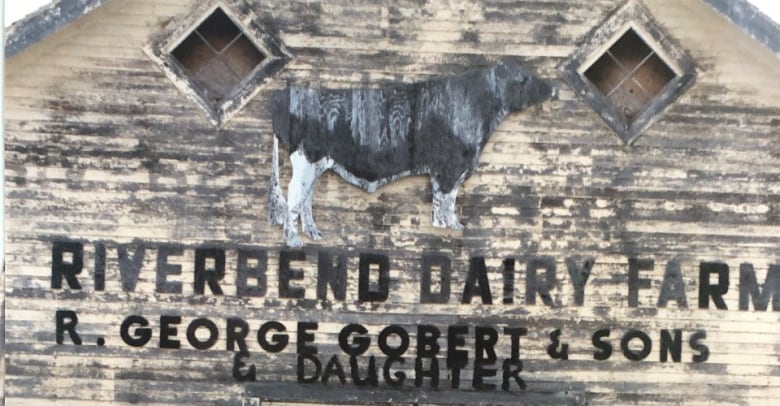 The plywood cutout on the barn honoured Rockwood Romarnuk, a Gobert bull that won multiple prize ribbons, including one from the 1955 Royal Winter Fair in Toronto. (Submitted by April Gobert)

“When the dairy was designed, they had a landscape architect design the yard, and it was gorgeous,” said April Gobert, the lone daughter.

It was full country living and the city was far off.

“My earliest memory is that the first set of lights was at Dakota,” April said.

“I went to high school at Dakota [Collegiate]. People wouldn’t drive me home because it was too far,” April said.

The farm was started by April’s grandfather, also named George, one of seven boys who came from Belgium. Each eventually started a dairy of his own.

The first was on Brock Street in River Heights, when that area was still rural. After George bought the St. Mary’s Road property, he took some cattle and marched his way with them to St. Vital.

He walked the animals from Brock to the Elm Park Bridge, along Kingston Crescent to St. Mary’s Road and south.

“My grandmother would tell that story and said they left a few gifts for the people on Kingston,” April said. “It was an upper-class neighborhood, so they got some free fertilizer.”

Through the years, other calves and bulls came from the Trappist monastery in St. Norbert. As a woman, Gobert was not allowed in, so she would wait at the road for one of the monks to bring the purchase out in a gunny sack.

One of those bulls, named Rockwood Romarnuk, went on to win multiple prize ribbons, including at the 1955 Royal Winter Fair in Toronto. In honour of his achievements, a plywood cutout of him was hoisted up near the peak of the barn in the 1960s. 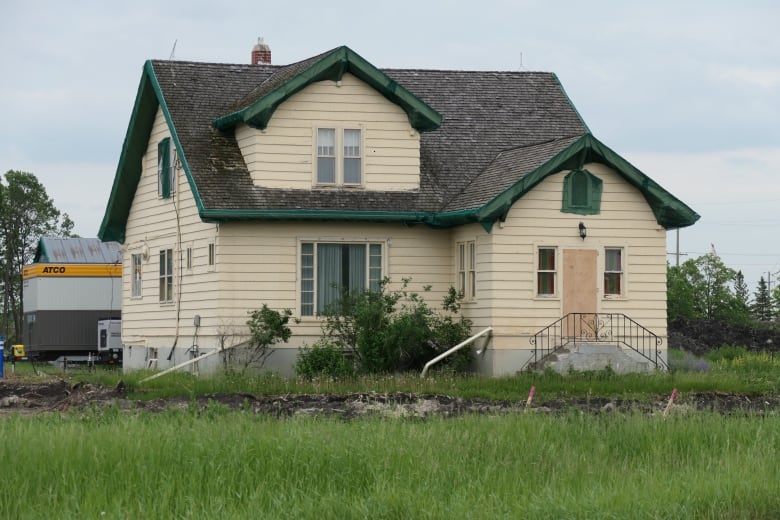 The house and other buildings on the property have been used by squatters and partiers since Lillian Gobert had to move out in May 2021. (Randall McKenzie/CBC)

The year 1975 marked a major shift for the Goberts. The dairy business closed and the land was sold to Qualico Developments, which started work on River Park South.

The Goberts continued to live at the property, renting it from Qualico and running a grain farm until they retired in 2008. R. George died in 2012.

Despite not being operational for 10 years, the farm remained an entrenched part of the fabric of St. Vital. People always recognize the Gobert name and relay their own memories, April said.

It’s all slowly being erased now. The trees are gone, clear cut at the end of March to make way for equipment.

“It was like a bulldozer with an auger on the front and it just mowed them down,” April said.

While Gobert has been “talking myself into it” to prepare for the demolition, April is eager to see it all go. After Gobert moved out, the buildings became a haven for squatters and partiers. 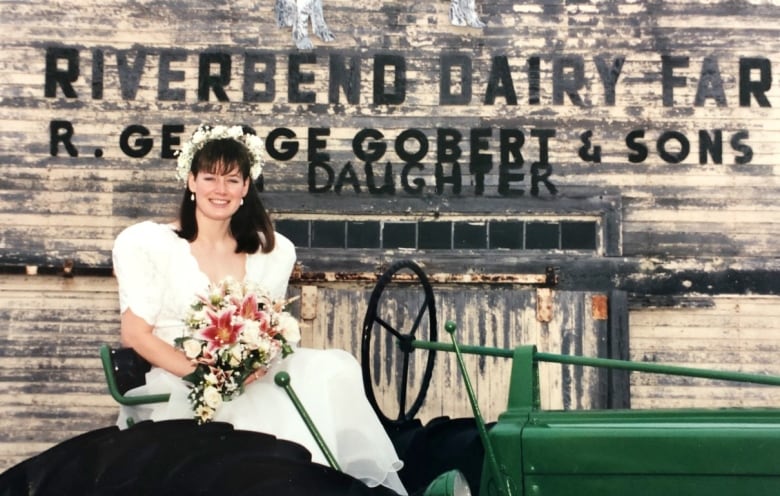 April Gobert poses for a 1993 wedding photo near the sign she adjusted years earlier to add the word daughter. (Submitted by April Gobert)

“The property and buildings here were not respected. That was difficult, seeing the house being lived in, and people were stealing wood off the barn, wood off the elevator,” April said.

“It seems like an insult to just how much that yard and its buildings were cared for and what they meant to my family.”

In a way, razing the buildings will preserve the past as she wants to remember it.

“The buildings will be gone but they don’t hold the memories. It was a great place,” April said.

One of those memories is the time April, at 16, used black paint to add “daughter” to the sign on the barn, which said George Gobert and Sons. She also painted an R in front of George to clarify the change in owners.

She later had wedding pictures taken by it.

Both edits have since worn away. 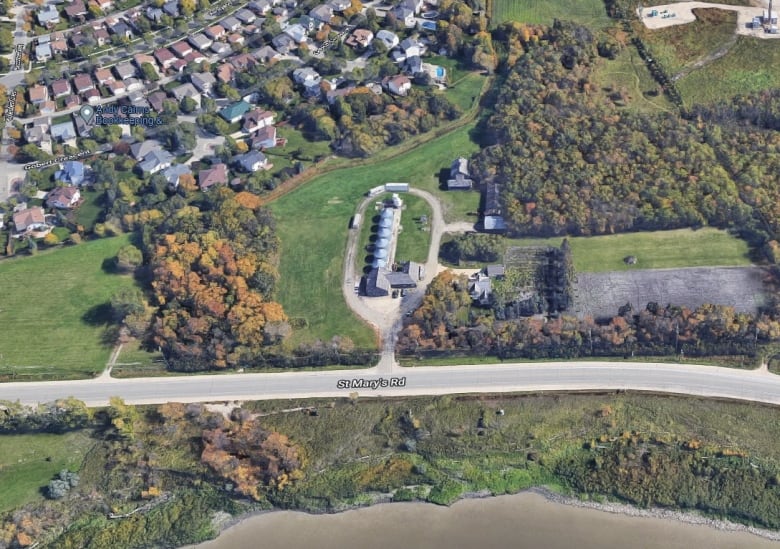 An aerial image of Riverbend Dairy Farm shows the River Park South neighbourhood bumping up against it. (Google Maps)

The elevator at the back of the property came down on Tuesday while April and Gobert watched.

“And it was good. We sat there kind of cheering it on,” April said.

Demolition of the barn and house is delayed because lead paint was found on the walls.

“It’s a permit issue because it’s a hazardous material right now,” April said, but she and Gobert will likely be there again when it’s time for them to come down.

And if they want to revisit more than a memory, a number of things were donated by Gobert to the St. Vital Historical Society and Museum, including an old crank wall phone and the plywood cutout of Rockwood.

“They did a great job of repainting it, and it’s beautiful at the museum,” Gobert said.