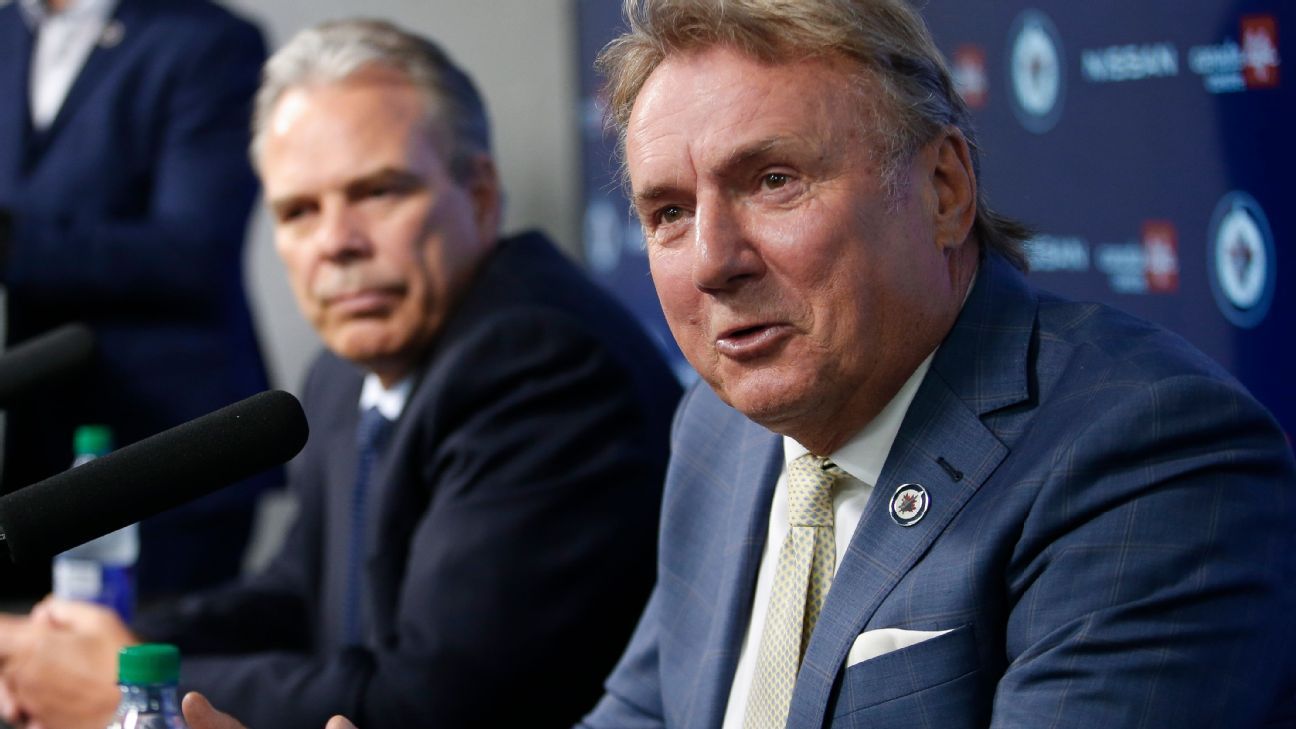 WINNIPEG, Manitoba — Rick Bowness doesn’t mind being the second choice. The Winnipeg Jets’ new coach was introduced Monday, a little more than a week after the team’s first choice, Barry Trotz, declined an offer because he wanted to spend more time with his family.

“If I’m in his chair, I’m going after Trotzy, too. I am. It’s that simple,” Bowness said with a laugh, referring to Jets general manager Kevin Cheveldayoff.

“If you ever get a chance to sit one on one, [Bowness is] easy to talk to, very engaging and that’s what players are looking for,” Cheveldayoff said.

“They’re looking to be heard, but yet they want to know that someone is in charge. Over that evolution process of his career, I think that’s probably been one of the most remarkable things, his ability to evolve and connect with today’s players.”

Cheveldayoff said he talked to about a dozen candidates, including those who got head-coaching jobs elsewhere, such as John Tortorella (Philadelphia) and Bruce Cassidy (Vegas).

Bowness stepped down as coach of the Dallas Stars after the season, explaining he felt the club needed a “new voice.”

Dallas lost in overtime in Game 7 to Calgary in the first round of this year’s playoffs. It reached the 2020 Stanley Cup Final in the playoff bubble in Edmonton and lost to Tampa Bay.

Bowness, who signed a two-year contract Sunday, is the Jets’ eighth coach in franchise history and third since the club’s relocation to Winnipeg from Atlanta in 2011.

The Jets missed the playoffs this year for the seventh time since the relocation.

Many players expressed frustration about the season, which included Paul Maurice unexpectedly resigning as coach in December. The club finished with interim coach Dave Lowry and went 39-32-11. Maurice was named coach of the Florida Panthers last month.

The Jets were seeking someone with a connection to Winnipeg. Bowness has that.

The former right wing ended his 173-game NHL playing career with Winnipeg. He played 45 games for the Jets in the 1980-81 season and played and coached with the organization for nine seasons until 1988-89. He was head coach for the team’s last 28 games in 1988-89.

Bowness said he turned down three coaching positions since leaving the Stars, but none were for a head coach.

He was excited when Cheveldayoff called and said he took the job because it wasn’t a rebuild and he could “work with good people, work with a good team in a great market like Winnipeg.”

“There was something missing there,” Bowness said of the Jets last season. “I’m not getting into it because I wasn’t here. It just got derailed a little bit.

“But if you go back and you look at the roster, how competitive they were for a while, it’s there. We just have to work together, all of us, players included, to get it back.”

Now, how many of those same players are still there when training camp opens is another question. As the NHL draft nears this week, and with free agency opening next week, the Jets have been mentioned as trading partners with several teams.

The Associated Press contributed to this report.