Heavy rains earlier in the week softened up the golf course. And some talented members of the PGA Tour Canada — especially those who got out in the morning before the winds began to pick up — took full advantage Friday as the Manitoba Open got underway at Southwood.

None more than 30-year-old Derek Oland from Colorado, who shot a stellar eight-under 64 to hold the solo lead. His round didn’t start off so well, finding water on the second hole and making bogey. But it was nothing but pars and birdies after that, including five-in-a-row on holes 12 through 16.

“Pretty good run, I guess,” he said with a laugh. No kidding. He actually had great birdie looks at 17 and 18 as well, but his putts just missed.

Winnipeg Jets centre Mark Scheifele splashes out of some sand at the Manitoba Open Friday at Southwood Golf and Country Club. He shot 78.

Oland arrived in Winnipeg sitting 43rd in tour rankings this season, having made the cut in three of four previous events. His best finish so far was a tie for 11th in Ontario last month.

“Hit it well, putted it well. A good day,” he said. “It’s a cliche, but just have to stay patient. You know, it’s always a marathon. But playing four rounds in three days, it’s an even bigger marathon.”

Indeed, organizators are trying to now cram the full tournament into an abbreviated timeframe after Thursday was washed out. The field of 156 will be cut down to the top 60 and ties following today’s second round, and the hope is to play both the third and fourth rounds on Sunday. However, that’s contingent on no more than 66 players making the cut. If it’s more than that, this will likely be shortened to just 54-holes. 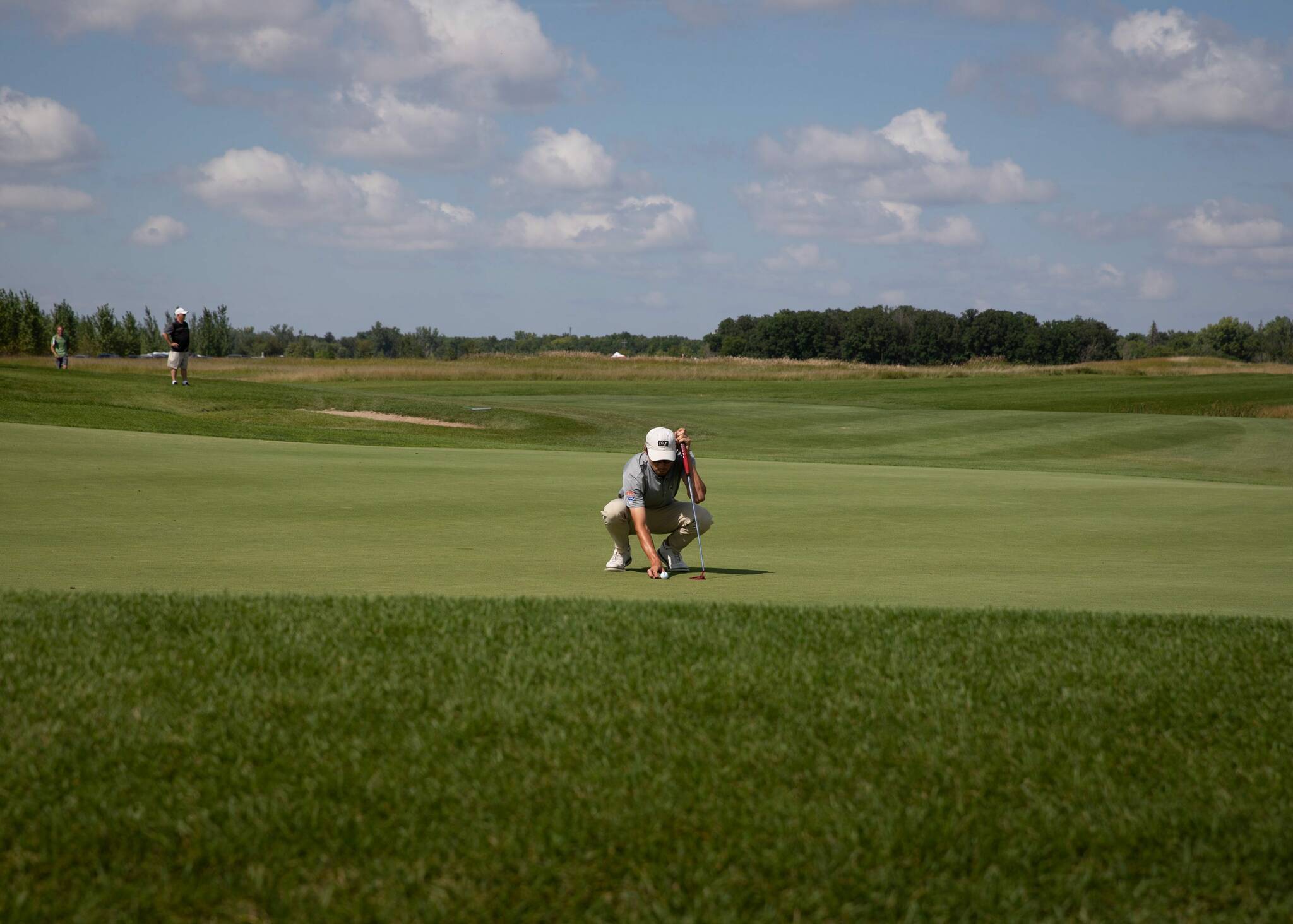 Kade Johnson lines up a putt.

Two fellow Americans are just a shot back of Oland. Mitchell Schow, who also played in the morning, finished strong with birdies on five of his last six holes. These were no gimmies, with his last three putts adding up to a combined 40-feet.

“I made probably three 15-to-20 footers,” said the 25-year-old from Utah. “I’m playing good golf and hitting the ball well and hitting putts how I want to.”

One of those was on the par-three 17th, which has been nicknamed the “Party Hole” this week and includes a live DJ spinning tunes as spectators watch on from the grandstand.

“It was awesome. I’ve never experienced anything like that. The guys went nuts,” he said. ” I was teeing off on 18, and they were playing AC/DC. And who doesn’t love a little AC/DC going on in their backswing?”

Parker Coody, a 22-year-old rookie tour member from Texas, had the best round of the afternoon with his seven-under 65. His twin brother, Pierceson, is a member of the Korn Ferry Tour and a former NCAA champion who just got his first win earlier this summer.

Four golfers are two shots back after shooting 66, including top Canadian Joey Savoie . The 27-year-old from Quebec had long been one of the country’s top amateurs before turning pro in 2020.

Four players with local ties are competing this week as well. Sudarshan Yellamaraju, who was born in India, moved to Winnipeg at the age of four and then to Ontario when he was 11, shot a four-under 68. Reigning Manitoba Junior and Manitoba Amateur champion Braxton Kuntz, playing on a sponsor’s exemption, had a one-under 71. Colwyn Abgrall, who got in the tournament through Monday qualifying, shot two-over 74.

And Winnipeg Jets centre Mark Scheifele, playing on a sponsor’s exemption, had an impressive six-over 78. He was just two-over through 14 holes, which included back-to-back birdies on eight and nine, but unravelled a bit with back-to-back double bogeys on 15 and 16. Still, a significant improvement over his 2018 appearance in which he shot rounds of 87 and 86.

The real winners on Friday were course officials who got the place ready to play after two big storm systems dumped more than four inches of rain on the course Monday and then again Thursday. Southwood pumped more than 1.7 million gallons of water off the track in a 12-hour period beginning Thursday evening.

“The course held up really well after all the weather that we got. (Thursday), I came out and got lunch and it was looking like a swamp,” said Schow.

Chips are down – Winnipeg Free Press