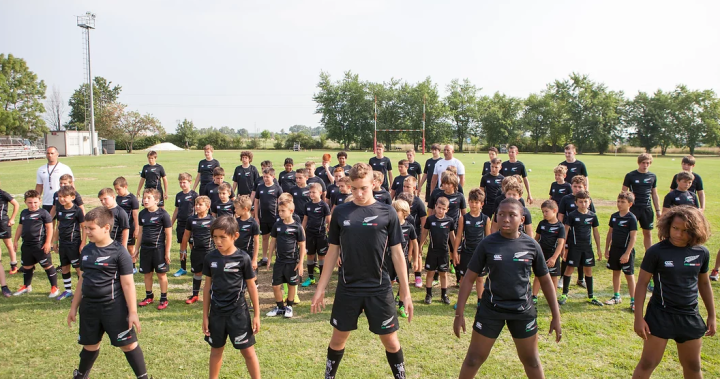 Young rugby players in Winnipeg will have a chance to learn from the best at a camp starting next week.

Haka Rugby Global, a New Zealand-based high-performance program, is hitting the city’s Maple Grove Rugby Park from Aug. 15 to Aug. 17, and offers kids aged seven to 18 a chance to develop on- and off-field leadership skills.

“Our coaches have played at the highest levels all over the world,” coach Caleb Stick told Global News.

“A few of them right now have been playing either with the All Blacks (New Zealand national rugby team) or with the New Zealand Maori Sevens team that’s been travelling all over the world, and we’re actually bringing some of those coaches here to Winnipeg.”

Stick said the camp caters to players at all levels — from fresh beginners to elite youth athletes, and focuses on physical movement, communication, leadership and culture.

“The biggest thing for this camp and the campers coming along would be the sense of creating future leaders,” he said.

“We speak about the culture,” Stick explained. “Part of it is building the culture of rugby and the culture of leadership. And then we build the skills, the high-performance skills second.

And of course, he continued, the program builds friendships.

“Rugby’s been in the city for over 50 years. It’s sort of a secret sport here, but followed by a bunch of passion. There’s a great community of rugby clubs here. There’s a fantastic youth program that’s up and operational now that the clubs run themselves. A phenomenal game.”

Because the program is New Zealand-based, one popular aspect of the camp is a focus on that country’s Indigenous Maori culture — including a chance for campers to learn a haka, a ceremonial Maori group dance that New Zealand teams are famous for performing before sporting events.

“It’s fantastic exposure to all of our youth players,” Stick said. “Parents and children will be exposed to the larger Maori culture that we like to infuse with rugby.”

Plans are in place to bring the camp north to Dauphin as well, at the Parkland Youth Rugby Association Vermillion Sportsplex on Aug. 18-19.

More information about the camps can be found on the Haka Rugby Global’s website.