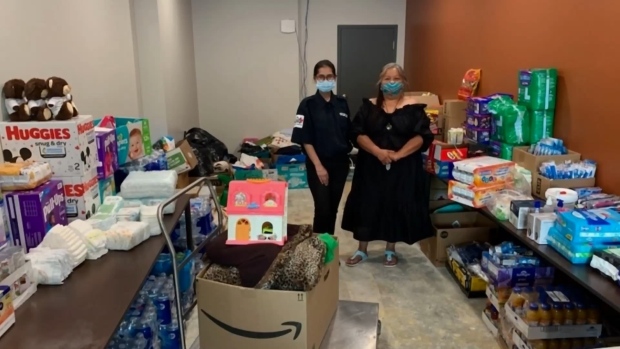 WINNIPEG —
With more than 2,000 people evacuated from First Nation communities in Manitoba, community members are collecting donations of food, clothes and toys for the families cooped up in hotel rooms.

Virginia Thomas was among the evacuees from Bloodvein First Nation – one of five First Nation communities that have been forced to be evacuated due to wildfires and smoke.

Thomas said during Bloodvein’s evacuation on Monday, she was helping to spread the word for families to pack up and get out.

“All the other communities around the surrounding areas were helping with the evacuees and that was really heart touching as well.”

As of Thursday, the Canadian Red Cross said more than 2,000 people were evacuated from their homes in Little Grand Rapids, Bloodvein, Berens River, Pauingassi, and Red Sucker Lake.

The Red Cross said most of these evacuees have been staying in hotels in Winnipeg.

For many of the families – particularly those with small children – the move from their homes to a hotel in Winnipeg has been difficult, Thomas said.

“We don’t know when we’re going to go home, and that’s so stressful for so many of us,” she said.

“Many are really lonely for home – the older people, the children want to go home, they’re so used to just stepping outside and going to play outside.”

To help the effort, Thomas has been organizing donations for these families.

Thomas, who put out the call on Facebook on Friday, said the response has been overwhelming.

She said donations have been piling in, including food, clothing, shoes, and toys for the children to play with while stuck in a hotel room.

“I’ve been getting phone calls, I’ve been getting text messages, inboxes from many, many people,” she said. “They’re being so generous and kind-hearted about donations and it is so overwhelming for me.”

For many families, it may be a while yet before they can return to their homes.

As of Saturday, the Manitoba Wildfire Service said 132 fires are burning across the province, including a number of fires near Bloodvein.

Frank Young, a CFS worker for Bloodvein who has been helping in the evacuation effort, said the fire around their community spread quickly.

“It actually ignited really close to our road, and when it actually picked up speed from the south-east, it jumped across the road,” he said. “And then it just went crazy.”

The fire damaged hydro poles in the area, knocking out power. Manitoba Hydro said it could take days for the power to be restored.

As of Saturday, Manitoba Hydro said the outage is affecting more than 1,500 people and is expected to be restored on Tuesday.

Thomas said she will continue to collect donations. They are calling for toys, bubble bath, snacks, books, clothing, juice boxes or bottles, games.

-with files from CTV’s Jill Macyshon