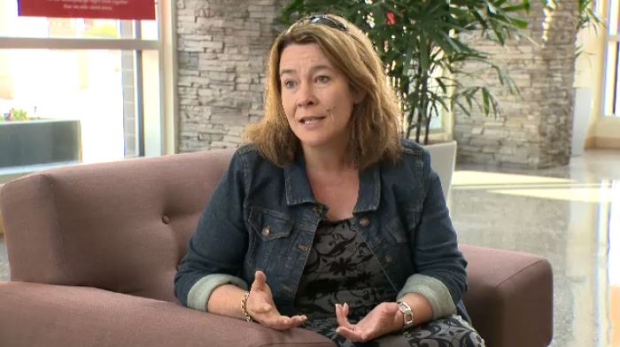 A Calgary mother gave a weekend workshop in Winnipeg where she shared the story of how her son was recruited by ISIS and wound up dying while fighting in the Syrian civil war.

“I never even contemplated that the risk would be something this great,” said Boudreau. “I grew up in Canada. Things like that don’t happen here.”

Clairmont converted to Islam at the age of 17 and his mom says he made positive changes in his life as a result.

But after a few years he fell in with a different crowd and became brooding and easily agitated.

Eventually Clairmont told his family he planned to study Arabic in Egypt.

Instead he went to fight in Syria’s civil war where he was killed.

“The news came to me through The Globe and Mail,” said Boudreau about how she learned of her son’s death. “They phoned me looking for a photograph to compare to a eulogy they received in a Twitter feed. That’s how it came out. Point Blank.”

Boudreau now travels the country with an organization called Extreme Dialogue, sharing the story of her son’s radicalization and hoping to help other families avoid the same tragic fate as hers.

“It was an eye-opener. And it was personal,” said Lubna Hussain, a volunteer with the Islamic Social Services Association. “So it was their own reflections, their own feelings and emotions.”

The group’s Winnipeg visit comes just days after RCMP arrested a Charleswood man on suspicion he could be involved in terrorist activities.

Aaron Daniel Driver, 23, will make a court appearance on June 9.

Members of Winnipeg’s Muslim community say there is open dialogue about how to deal with radicalization.

“I think there’s an awareness in the community because we’re getting educated,” said Hussain. “So I think the Muslim community, their eyes are open.”

Boudreau’s eyes are now open too as she talks to people about the signs to look for so they can stop their loved ones from taking the same path as her son.

“He was misguided,” said Boudreau, “And so I’ve taken it to try to help in a way that hopefully he’d be proud if he could see me now.”