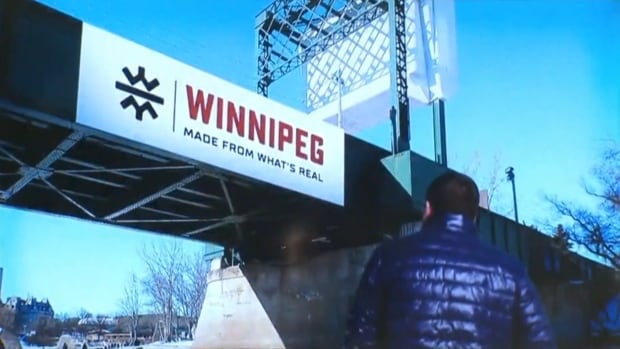 A new marketing campaign will soon appear in movie theatres, on TV, online and in social media, aimed at drawing more tourists, talent and investment to Winnipeg by convincing them the city is “made from what’s real.”

Economic Development Winnipeg and Travel Manitoba announced “Winnipeg: Made from what’s real” as the city’s new slogan and place branding initiative on Wednesday.

The branding “will be used to market our city to the world and attract more talent, investment and visitors,” while attempting to encapsulate and reflect something genuine that defines the city and its people, the development and tourism agencies said in a news release.

The slogan stems from “a realness and sincerity to how Winnipeggers talk about this city,” the release said.

“I’ve continually said that Winnipeg is ripe for opportunity as a place to work, visit and do business,” Dayna Spiring, president and CEO of Economic Development Winnipeg, said at a Wednesday news conference to launch the rebrand.

“We need to be ambassadors for this city, to be loud and proud about Winnipeg — what it offers us, our families and our future.”

Dayna Spiring, president and CEO of Economic Development Winnipeg, unveils the new city slogan at an announcement on Wednesday. (CBC)

The rebrand replaces the previous slogan, “Winnipeg: Heart of the continent.”

During the unveiling, Spiring threw to a promotional video that cycles through glamour shots of the city.

Turn up that music!
Winnipeg’s new PLACE brand and logo are here!
What does the logo mean? So many different things to Winnipeggers—take a look at just some of the interpretations.
Get the real Winnipeg story here: https://t.co/EI6KOHfSf0 pic.twitter.com/PzWe3m8lv2

Colin Ferguson, president and CEO of Travel Manitoba, which collaborated on the rebrand, said rebuilding the Manitoba tourism industry “from the ravages of the pandemic” requires branding that pushes pride in local businesses and community members, and draws in visitors.

He said Travel Manitoba has helped a dozen other Manitoba locations come up with place branding since 2017, including Flin Flon and the Whiteshell.

Reaction to the slogan was mixed on social media.

I hate this slogan.

“Made from What’s Real” sounds like the buzzword branding for 100% all beef hotdogs not a city. https://t.co/V186Xesg1M

To me it refers to authenticity and integrity. I’m ok with it, and I love the promotional video – what a great song!

I feel “Made from what’s real” is probably an amalgam of a few great ideas that the branding committee batted about for so long they became steeped in the copious context of their brilliant idea, and then sent it out into the world without any.

That’s the best I can hope, anyway

I really think #Winnipeg and their new #motto of #MadeFromWhatsReal will eventually grow on us as the memes spread.
I know I will have fun making various ones… #mbpoli pic.twitter.com/JvHYCF36g4

Spiring said Economic Development Winnipeg and Travel Manitoba arrived at the slogan after two years of research. The results suggested Winnipeggers are proud of “the ingenuity, creativity and industriousness” of the city, she said.

“We need to tell a story of Winnipeg written by Winnipeggers, one that is reflective of what our city is today: innovative, creative, connected, diverse and so much more,” said Spiring.

“The story we tell is key to attracting more business, investment, visitors and people to Winnipeg.”