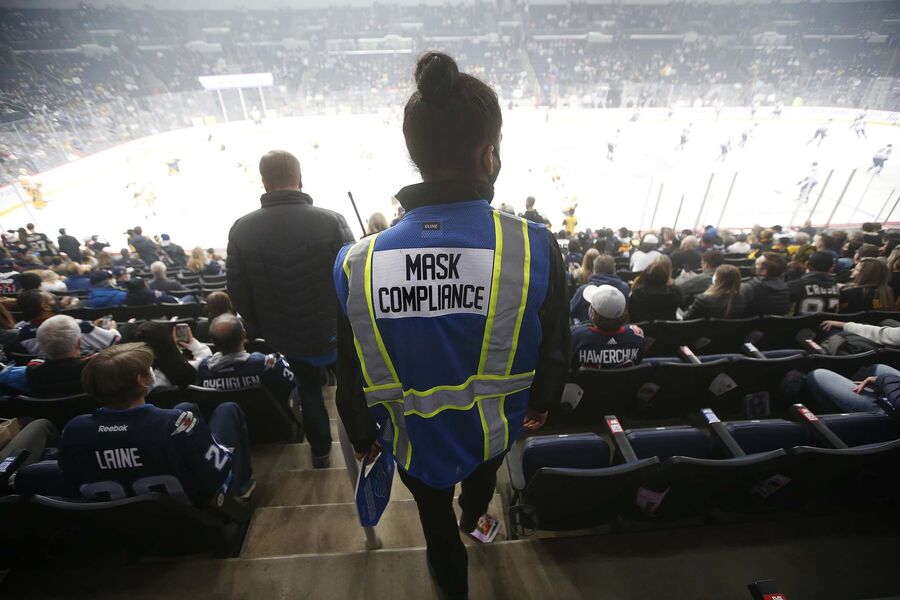 The new mask compliance team was first deployed at Monday night’s game and will directly remind fans to wear masks at all large arena events in the near future.

“At the moment, people will see that at every Jets game and it’s very foreseeable that people will see them at the next concert,” said Kevin Donnelly, a senior vice-president with True North Sports and Entertainment. “For the most part, they will be at all our… gatherings.”

All guests over the age of five are required to wear a mask that covers their mouth and nose at all times inside the centre, unless they are actively eating or drinking, according to the Canada Life Centre website.

A member of the mask compliance team walks through the Canada Life Centre concourse prior to the game between the Winnipeg Jets and the Pittsburgh Penguins Monday.

Donnelly said the dedicated compliance staff members, whose presence will vary with the size of each event, will help ensure that rule is clear.

“They are a visual reminder, they are yet another cue for people to be reminded to pull their mask back up after they’re finished consuming (food or drinks),” said Donnelly.

He said the compliance teams are designed to free up other staff members to focus mostly on their regular duties and keep the arena as safe as possible as the pandemic drags on.

“It’s just another level of staffing that hadn’t been required pre-COVID in order to really function smoothly and meet all the requirements that we need to meet as a public assembly facility that’s trying to operate at capacity. These are the ground rules,” he said.

“They are a visual reminder, they are yet another cue for people to be reminded to pull their mask back up after they’re finished consuming (food or drinks).”
— Kevin Donnelly, senior vice-president with True North Sports and Entertainment

While Donnelly stressed the vast majority of fans have put their masks back once reminded, there have been a few exceptions.

On “quite rare” occasions, staff have called in security when patrons don’t comply with the rule. A few times, that’s led offenders to be escorted out of the building, with or without police support, Donnelly said.

He said two groups of Jets fans were asked to leave following interactions that began with mask reminders Monday night, while one other group was kicked out of a previous game.

In those incidents, the patrons weren’t wearing masks but also exhibited some form of disrespectful behaviour, Donnelly said.

Monday’s game between the Jets and the Penguins was the first the mask compliance team was put into action.

He said devoting staff to education should make standards for mask use a little clearer around eating and drinking.

“Certainly, there is some nuance about how many seconds do I get between sips? Do I have to put my mask up if I’m five seconds between popcorn (bites)? …We just need them all to do their very best to keep their masks on,” said Donnelly.

Some Jets fans support the move.

Craig Doell, a respiratory therapist at Boundary Trails Health Centre, said he was disappointed to spot two women seated in front of him at an early November Jets game who didn’t wear masks the entire time they were in their seats.

“It is, granted, difficult… to enforce. But these are public health orders, people (should) follow the rules. Just because you’re vaccinated doesn’t mean you don’t have to follow them,” said Doell. “I was a little peeved at that.”

Doell said most fans wore their facial coverings consistently at that game. While he believes the onus is on individuals to mask up, he welcomes the new compliance team.

“It shouldn’t be needed but clearly people need to be reminded that you can take your mask off to eat or drink but when you’re done (the masks) should be going back up. We’re 20 months into the pandemic and (there are people) who don’t understand the mask needs to go over your nose as well,” said Doell.

Ron Neufeld said he also thinks a compliance team of polite, trained staff could help get the message across, even though he already believes “pretty much everybody” followed the rule at Jets games he attended.

“I don’t have any complaints about what other people are doing. People are trying… We want COVID to be over,” said Neufeld.

Born and raised in Winnipeg, Joyanne loves to tell the stories of this city, especially when politics is involved. Joyanne became the city hall reporter for the Winnipeg Free Press in early 2020.