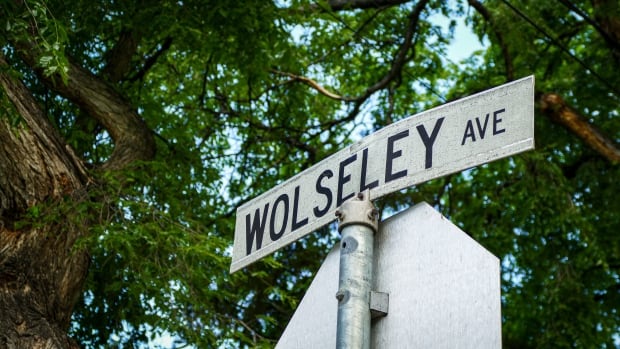 Some Wolseley residents say they’re open to changing the name of their central Winnipeg neighbourhood after a campaign led by a grassroots Métis group aimed at exposing the name’s colonial history.

In June, Red River Echoes plastered close to 300 posters around Wolseley highlighting what has been called the “reign of terror” against the Métis that followed Col. Garnet Wolseley’s 1870 campaign.

The posters call for the renaming of the Woseley neighbourhood, along with Wolseley Avenue and Wolseley School.

“Names like this and other colonial names in the city continuously cause harm and force people to walk upon our lands— our kin, our relatives — walk in the face of someone who tried to eradicate us,” said Chantal Garand.

They’re part of the Red River Echoes group, which says it formed in response to Métis people feeling not heard or represented by current government.

About 300 of these signs were plastered around Wolseley in late June by the Red River Echoes group. (Walther Bernal/CBC)

Wolseley’s 1870 campaign led to the harassment and displacement of Métis people. A petition last year calling for the renaming of locations named after Wolseley described him as “the military leader of Prime Minister John A. Macdonald’s genocidal scheme of white ‘armed emigration’ to the North West.”

“If you know anything about the history of Manitoba you know that Gen. Wolseley was a bad dude,” said Debbie Patterson, a long-time area resident who says she’s long thought the name should change.

She added although most people in the area love the neighbourhood and are proud to live there, the name is not consistent with the idea they have of themselves. 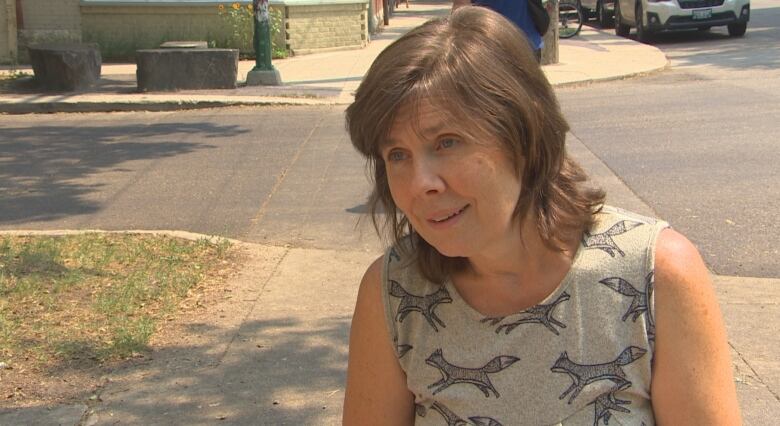 Another self-described “proud Wolseleyite” feels the same way, and says a new name wouldn’t diminish what he loves about his neighbourhood.

“Times have changed and our awareness around Indigenous issues and things pertaining to symbols, names, has come to light. And I agree it has to change,” said Adrian Challis, who has lived in Wolseley since 1969.

“Find a name that represents everybody,” he added.

Patterson said most of the feedback on the educational campaign has been positive so far, but some of the posters have been defaced, indicating there is work to be done.

CBC spoke to several residents, some of whom identified themselves as Métis, who opposed the name change altogether, but didn’t want to be interviewed.

When a petition urging renaming circulated last year, the Manitoba Metis Federation said while Garnet Wolseley caused great harm to Métis and other Indigenous people in the 1800s, it didn’t support the push to rename.

Federation president David Chartrand said at that point the federation’s cabinet decided the names of those who harmed the Métis should stay in place, to ensure their destructive legacies are not forgotten or repeated.

Wolseley resident Greg Winkworth says he supported the recent toppling of the statues of Queen Victoria and Queen Elizabeth at the Manitoba Legislature in defiance of Canada’s colonial history, but doesn’t think the effort to change Wolseley’s name will succeed.

“I personally don’t care if they change the [Wolseley] street’s name, if that offends people. But you’re not going to convert the people in this area from not calling this Wolseley because that’s where they live,” he said. “This is Wolseley. And we’re proud of it.”

He added that now that he knows about the posters, he’ll do his own research into who Wolseley was, but says the name has its own identity to him and many neighbours.

Change in the neighbourhood has been slow, with the area shifting from Volvos and hippies decades ago to now even seeing a few conservative political signs in yards, Winkworth said.

He said what’s endured, and what the name means to him, is the spirit of friendship and helping each other.

“It’s got a history to it too.… A lot of crap happened back then. I certainly support people trying to make it right, make it better and make people aware of what went on.”

Garand said Red River Echoes will be hosting an information session and chance to discuss the issue with residents later this summer.