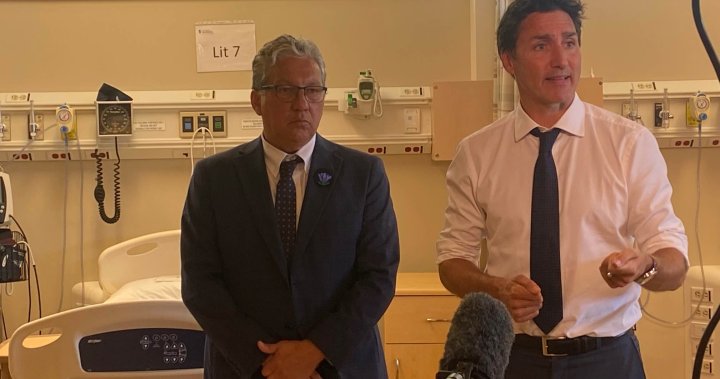 Prime Minister Justin Trudeau says some premiers aren’t being honest about the effect of Ottawa’s carbon tax on average families.

Trudeau, who met with Manitoba Premier Heather Stefanson in Winnipeg, said the average family gets more money back from the federal price on pollution.

The Manitoba leader has called for the federal government to temporarily suspend its carbon tax to help people deal with inflation. She sent a joint letter with Alberta Premier Jason Kenney and Saskatchewan Premier Scott Moe urging Trudeau to take action earlier this year.

Earlier Thursday, the four Atlantic premiers sent a letter to the federal government requesting a short-term extension to submit plans for carbon pricing plans. It said added costs of the tax would amplify inflationary pressures in Atlantic Canada.

Ottawa’s deadline for provinces to submit their plans is Friday.

Following the half-hour meeting, Stefanson said she and Trudeau discussed the issue and agreed to disagree.

Stefanson says people are struggling with inflation, so it would be best not collect the carbon tax temporarily, instead of taking in money and rebating it later.

Stefanson says she and the prime minister also discussed issues such as increasing immigration levels and infrastructure.

Justin Trudeau will get a grilling from Winnipeg elementary college…

Trudeau acknowledged Canadians are facing challenges around affordability, but said Canada will continue to lead on fighting climate change while supporting families.

Stefanson’s Progressive Conservatives have been working with the federal government on several fronts, including a recent agreement to upgrade the rail line to Churchill in the province’s north.

However, there are other points of contention. Stefanson has also criticized the federal government’s plan to cut fertilizer emissions by 30 per cent by 2030.

During his daylong visit to Winnipeg, Trudeau met with nursing students at Universite de Saint-Boniface in a mock hospital room with eight fully equipped beds and mannequins for patients.

Trudeau was joined by Dan Vandal, the minister responsible for northern affairs and Prairies economic development, and spoke to the students in French about choosing a career in health care.

Trudeau is later scheduled to meet parents at a children’s centre.