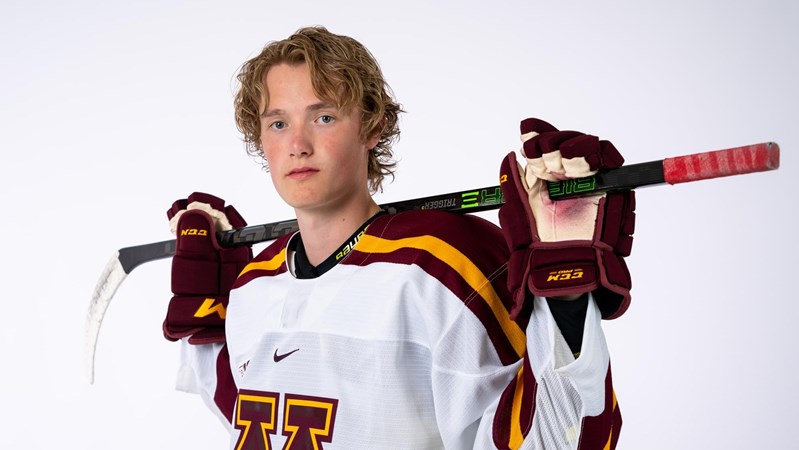 The 22nd University of Minnesota product taken in the first round of the NHL Entry Draft, Lucius was selected by Winnipeg in the 2021 NHL Entry Draft with the 18th overall pick – the highest pick the Jets have used to select a Gopher.

“Chaz is one of the most impressive offensive players I have coached in my career. His ability to create offense at any moment on the ice is as high level as I’ve seen,” Minnesota head coach Bob Motzko said. “He has a tremendous future ahead of him with the Winnipeg Jets organization, and we look forward to following what is sure to be a long and impressive pro career. We wish him the best as he takes the next step in his hockey career.”

A native of Grant, Minn., Lucius scored nine goals and recorded 19 points in 24 games with the Maroon & Gold this year as Minnesota claimed its fifth Big Ten regular-season title in the conference’s nine-year history and advanced to the NCAA Frozen Four for the first time since 2014. The forward, who opened his college career with a point in three-straight games, tallied five multi-point games this season including a career-high three points in a 4-1 win over Michigan State on Jan. 7, 2022. Minnesota was 10-3-0 this year when Lucius notched a point while he finished fourth on the team in points per game and was second in scoring among Minnesota freshmen.

A product of USA Hockey’s National Team Development Program, Lucius once again represented the United States on the international stage as one of three Gophers on the 2022 U.S. National Junior Team for the IIHF World Junior Championship. He also helped USA Hockey to a gold medal at the 2019 U-17 Four Nations Tournament and a silver medal at the 2019 World Under-17 Challenge. Lucius previously skated at Gentry Academy as a prep.

Jets seize 1-Zero lead over Flyers after one