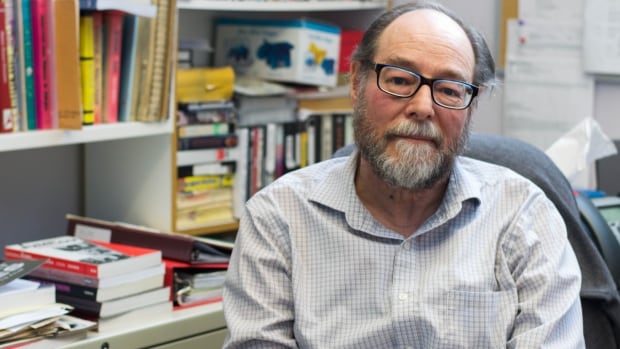 A longtime film professor who died earlier this month after a long battle with cancer is being remembered for his passion for film, and for sharing that passion with students over a teaching career that spanned decades.

Howard Curle died on Aug. 12, at age 74, after living with multiple myeloma for almost four years, an obituary published Saturday in the Winnipeg Free Press said.

Bev Phillips, Curle’s wife of 32 years, says what she will remember most about her husband is his kindness, gentleness and enthusiasm for life.

As a teacher, Curle accepted everyone as they were and was excited when his students made progress — no matter how small.

“He just took delight all the time in seeing other people around him get better, and I think that’s a good lesson we can all take,” said Phillips.

Being engaged with life was most important to him, and he never tired of learning new things, she said.

Her husband had a keen interest in film as a teenager, but took that interest much further than most, said Phillips. He carefully studied not just the history of film but also its technical and theoretical aspects, and could discuss movies from all different angles and viewpoints, she said.

Howard was just a wonderful friend, husband, uncle and just a really good, kind, sweet person. I think he would be happy to be remembered that way.– Bev Phillips, Howard Curle’s wife

Curle was also an attentive husband, who was generous with his time, thoughts and expertise, she said.

“When he wasn’t working, Howard was just a wonderful friend, husband, uncle and just a really good, kind, sweet person.

“I think he would be happy to be remembered that way.”

George Toles, now a distinguished professor of film and literature at the U of Manitoba, met Curle there in 1976, when Toles was an assistant professor teaching in the film studies program and Curle was an undergraduate taking classes.

“Someone said Howard had all the kindness of the world in his eyes,” Toles told CBC News in a phone interview Saturday.

“I said to myself, ‘If there are more people like this in Winnipeg, things are going to be OK for me.'”

Curle had an extraordinarily caring heart, said Toles, and would make every conceivable effort to make sure his students succeeded. Curle and his wife were immensely supportive of the local arts community and were “invariably curious,” said Toles.

“He was someone who was instantly able to get enthused by any art topic that any person running into him brought up — no matter how eccentric, far-fetched,” said Toles. “He just lit up … with such engaging curiosity and extraordinary listening.”

In his teaching years at the U of Manitoba, Toles said Curle would take on new film courses that no one else wanted to teach, leading him to extensively research topics such as Serbian documentarians, African women filmmakers and experimental films of the 1950s.

“Whatever the topic, Howard said yes,” said Toles, and was “a person who showed you every time you met him why art and engagement with the world, and caring for the world, mattered. That’s his legacy.”

Thomas Pashko, now the managing editor of the Uniter, the University of Winnipeg’s community newspaper, took many courses with Curle and worked as his teaching assistant.

“He taught me so much about Winnipeg, and film, and lots of other things,” Pashko wrote in an email to CBC. “I’m sure he had similar impacts on so many people’s lives without even knowing it.”

Curle was also involved with the Winnipeg Film Group and appeared in many films by local filmmakers, as well as dozens of films made by his U of Winnipeg students.

“Everyone who knew Howard remembers his gentle nature and his genuine love of cinema. He was devoted to teaching and to encouraging young filmmakers,” the Winnipeg Film Group said in a post on its website Thursday.

Kevin Nikkel, a filmmaker and member of the Winnipeg Film Group, says his friendship with Curle began as they waited in line at Cinematheque, the film group’s Exchange District arthouse movie theatre.

The two would often find themselves going to the same films over the years, he said in a phone interview with CBC News.

Nikkel recalled that not too long ago, he and Curle bumped into each other outside Cinematheque, where Curle was adamant that Nikkel watch the South Korean film Parasite — which went on to win the best picture Academy Award in 2020 —  so they could discuss it.

The memory is an example of how deeply Curle was plugged into the current trends of cinema after his retirement from teaching, said Nikkel.

“With Howard’s passing, it just makes it so much more important for us to make sure we’re watching the knowledge keepers,” he said, adding that as a filmmaker, he appreciated Curle’s role as a film historian and critic.

“We have to make sure the knowledge that these wise souls have is captured and documented before they pass along, because Howard had such an extensive understanding of what was happening locally.”

Curle’s love for film showed Nikkel that people should strive to be passionate about the thing they love the most, he said.

“For Howard, that was cinema.”

Chips are down – Winnipeg Free Press