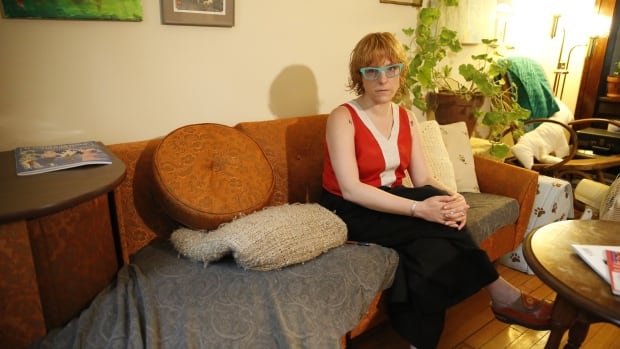 A Winnipeg woman says she’s been left shaken after waking up to find a stranger in her home and waiting 20 minutes for police to arrive.

She’s now questioning that response time, and also why a 911 dispatcher suggested she could confront the intruder herself.

Angela Chalmers woke up to the sound of her dog Loki growling and barking at the top of her stairs shortly before 7 a.m. on June 18.

“I came down to see what it was that he was barking at, and I walked halfway down the stairs and there was a strange man lying right here on my couch,” said Chalmers.

Chalmers went back upstairs and quietly alerted her roommate. The pair barricaded themselves in a room upstairs and called 911 while hiding in a closet, only to be told police couldn’t come right away.

“They said that the police were really busy and would we mind going downstairs and waking him up ourselves?” she said.

Chalmers did mind. She and her roommate stayed upstairs until police arrived 20 minutes later and the pair ran downstairs and out of the house in the Earl Grey neighbourhood.

It took four officers to get the man out of her home after he woke up and became aggressive, she said.

Police say the incident is being reviewed and the 911 dispatcher who spoke to Chalmers has been provided feedback on the handling of the call, some of which deviated from standard practice, said Kelly Dehn, director of public affairs for the Winnipeg Police Service, in an emailed statement.

Dehn said response times can vary for any call depending on the time of day and resources available, as well as the urgency of the event, but the call was appropriately dispatched in a timely manner.

A police spokesperson also said they would typically advise callers not to approach a person, which could put their safety in jeopardy.

“A person would be advised to exit the building or residence until police arrival,” said Const. Claude Chancy in an email.

A screenshot on Chalmers’ phone shows the 911 call lasted 20 minutes before police arrived and the call was disconnected. (Holly Caruk/CBC)

Chalmers says the officers who responded were apologetic about the delay, but she worries things could have turned out very different if she had followed the 911 dispatcher’s suggestion.

“I wasn’t harmed, nothing was taken, it worked out okay this time, but had I been someone else … and took that 911 operator’s horrible recommendation, that could have ended completely differently,” she said.

Chalmers said her instinct was to hide and protect herself and her roommate because she’s lived through something like this before.

The 44-year-old was the victim of a violent home invasion in Vancouver 12 years ago. She says she was beaten and left for dead after two men stormed into her apartment in a case of apparent mistaken identity.

“They thought that they were robbing the people who lived there beforehand,” she said.

“When they realized that I wasn’t the person that they wanted to rob, I sat there and listened to them have a conversation about what to do with me and they decided they would kill me, because I’d seen their faces.”

In that case, a neighbour had heard the noise and called the police. Paramedics had to revive her, she says.

She acknowledges her past situation played a role in her fear that night, but says no one should have to wait 20 minutes for police to arrive in a situation like that, and they definitely should not be advised to confront an intruder.

“The idea of having a 911 operator tell me to deal with the person, that’s why we have police.”

She also questions why a call regarding a man inside her home didn’t warrant a faster response.

“If we’re going to depend on the police, I’d like to know that they’re going to show up when I need them.”

Chalmers said she doesn’t know who the man was or why he came into her home. She says nothing from the home was taken and that the door must have been accidentally left unlocked, because there were no signs he forced his way in.

Police said they determined there was no criminal intent in the incident and the intoxicated man was not charged at the homeowner’s request.

The incident has left Chalmers rattled and unable to sleep.

“I’m checking the locks 12 times through the entire day, never mind at night.”

She hopes by telling her story, changes can be made to how 911 dispatchers are trained to handle these types of calls.