A woman who says she was threatened by a man on a city bus earlier this week wants Winnipeg Transit to provide better security.

Donna Guspodarchuk got on the #18 bus on Graham Avenue after leaving work on Tuesday. She said she heard someone talking loudly as she shuffled towards the back of the bus, and that person soon focused their attention on her.

“As I got closer, he looked at me and he’s like, ‘There’s a snake around your neck. You’re going to die. Do you want to die?'” Guspodarchuk told CBC.

The man’s behaviour was “erratic” and he appeared to be on drugs, she said. She noticed his pants were down and he was scratching his genitals.

“He reached down near his right leg and he said, ‘Nobody wants to die, right?’ And I thought, this is it. I thought he was going for a knife or something.”

‘Even though nothing physically happened, it really affected my mental health,’ says Donna Guspodarchuk. (Alana Cole/CBC)

Guspodarchuk says the man continued to antagonize her until he got off the bus near Redwood Avenue and Main Street.

“All I could think about was my family — my grandkids,” she said. “I felt like a child. I was so afraid. I was in shock because I couldn’t move.”

Another passenger at the front of the bus told the man to leave her alone, but Guspodarchuk wonders why the driver didn’t step in.

Alissa Clark, a communications manager with the City of Winnipeg, told CBC on Friday that Winnipeg Transit regularly co-operates with police investigations of such incidents, often by sharing video footage.

She said the city has introduced numerous safety measures in the last 13 years, including specialized training for Transit drivers on assault prevention, de-escalation and self-defence.

The transit union says there were about 130 verbal and/or physical assaults on Transit workers in 2022, but that doesn’t include incidents involving passengers.

Guspodarchuk says she has been in contact with police about the incident. She wants to see better security on buses and for people to call 911 if they witness similar incidents.

Since 2017, the city has spent $9.6 million for Transit safety initiatives, which have either been implemented or are in the process of being implemented, said Clark.

In 2018, Transit hired nine new full-time inspectors, ensuring they had body armour and training to recognize and interact with citizens under the influence of meth. All city buses are equipped with safety shields and emergency signals, she said.

The Transit advisory committee is also working on developing a long-term safety plan, but it’s too early to discuss details or potential outcomes, or if Guspodarchuk’s experience will factor into it, said Clark.

A spokesperson for the mayor’s office told CBC that mayor Scott Gillingham has spoken with the province’s minister of justice about potentially using peace officers on buses, and that the city will be working toward further steps in the upcoming budget.

Winnipeg police advise transit passengers not to intervene in situations that could potentially put them in danger, and to instead contact police.

“As a bystander, I think it’s important to acknowledge that you see these things are happening,” Daniel Hidalgo, co-founder of Sabe Peace Walkers, told CBC.

The Sabe Peace Walkers are an Indigenous-led de-escalation team focused on providing trauma-informed, relationship-based care to the community and often collaborates with the Downtown BIZ and the Downtown Community Safety Partnership, he said. 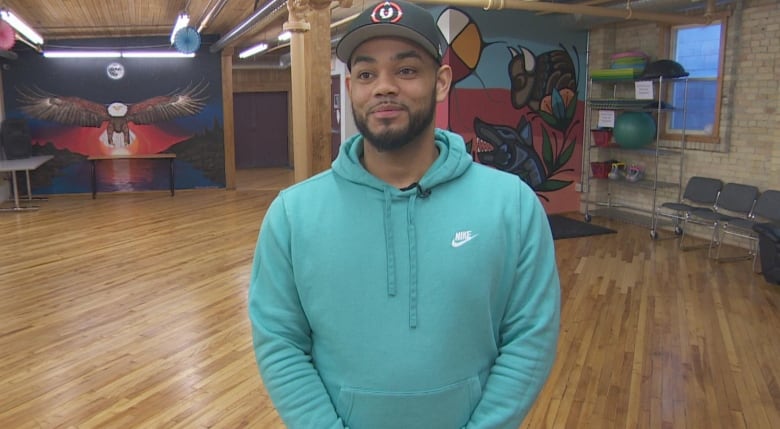 ‘The biggest thing that’s important for our city is to try and have that compassionate and empathic lens. It’s so easy to judge somebody on their bad days,’ says Daniel Hidalgo, co-founder of Sabe Peace Walkers. (Alana Cole/CBC)

Witnesses of escalating situations can speak to the victim and show their support, but Hidalgo urges them not to physically intervene.

“The utmost important thing is finding a way to keep both yourself safe and the person being victimized safe.”

Sabe Peace Walkers often have pre-existing relationships with the people who may be perpetrating the escalation, he said. They are able to identify what works and what doesn’t for the person, as well as what their triggers are and what might bring them “back to normal.”

Hidalgo said his group has a dedicated cellphone at their station in Osborne Village that people can call for help.

However, he wants Winnipeggers to consider the factors that may be behind someone’s escalating behaviour.

“The biggest thing that’s important for our city is to try and have that compassionate and empathic lens. It’s so easy to judge somebody on their bad days.”

But Guspodarchuk is still shaken by the incident. She says she hasn’t gotten much sleep since Tuesday and is now scared to leave her home.

“Even though nothing physically happened, it really affected my mental health.”