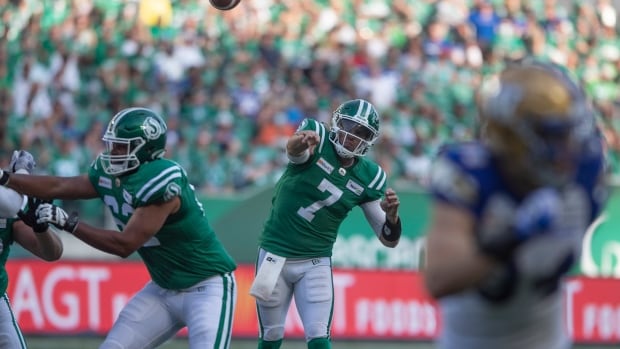 The Saskatchewan Roughriders hope an infusion of receiving talent will help them continue their Labour Day Classic success against the CFL-leading Winnipeg Blue Bombers.

The Riders (6-5) host the Bombers (10-1) at Mosaic Stadium on Sunday having won 14 of the last 16 Labour Day matchups against Winnipeg. And while Saskatchewan will be without receiver Duke Williams (ankle), veterans Kyran Moore, Shaq Evans and Brayden Lenius will all be in the starting lineup as a group for the first time this season.

Moore returned for last week’s 23-16 victory over the B.C. Lions after recovering from ACL and MCL injuries suffered last October. Evans suffered a broken ankle in a 37-13 loss to the Montreal Alouettes on June 23 while Lenius rejoined the team this week after being released by the NFL’s Atlanta Falcons.

Saskatchewan has struggled in the deep passing game this season but Lenius is optimistic quarterback Cody Fajardo will benefit from the additions to the receiving corps.

“We’re so dynamic, we’re so different and it’s so many elements on each player as we all bring something different to the table,” said Lenius, who had 37 catches for 471 yards and a team-leading four touchdowns last year. “I think with all of us back, Cody is going to have that extra confidence.

“He’s going to know that he can throw it to any of us and we’ll have him covered.”

Lenius also admitted the incoming receivers might have to deal with a little rust due to inactivity. Conditioning might be his biggest issue Sunday.

“I think it’s going to take a game for me to get my legs back,” he said. “I’m not going to say I am ready enough to play a game as there might be moments where I’ll be tired.

“But that’s just part of getting back into game shape, getting my legs back. I think it’s going to take it this week and I’ll be good but I’m feeling really good right now.”

Fajardo is coming off one of his best efforts of the season, completing 19-of-24 passes for 321 yards and two touchdowns against the Lions. He believes patience will be important when working the newcomers into the offence.

“Offensively, we’re just trying to find a rhythm,” he said. “We’re trying to get our stride but haven’t got there yet.

“There’s going to be a little rust on those guys and they’re going to be amped up and fired up so we’re just trying to get everybody settled in. Hopefully we’ll get those guys catches early so they can feel like they’re into the game. I know they’re really looking forward to getting back on the field.”

The Bombers will be the biggest test of the season for the Riders. The back-to-back defending Grey Cup champions have the opportunity to clinch a playoff with a victory.

With three of Saskatchewan’s next four games coming against Winnipeg, Fajardo knows this is a key part of the schedule. With a veteran-laden roster, the Bombers have developed into a confident team that understands what it takes to win.

“It’s difficult to get them as they never seem to hit the panic button,” Fajardo said. “They could be down but they remember they’ve won a lot of football games together so they understand that there’s no sense in hitting the panic button.

“So even if we do happen to get a lead early, we’ve got to keep our foot on the gas and not let them get back into it. And when they’re playing with the lead, they play with such confidence that they try to bury people. It’s very difficult either way to go against. It’ll be a good measuring stick for us.”

Riders head coach Craig Dickenson has been away from the team this week after testing positive for COVID-19. He was scheduled to return Saturday for practice but was absent as he required a negative test to be eligible to coach in Sunday’s game.