Jets return to profitable model of hockey in win over Blues 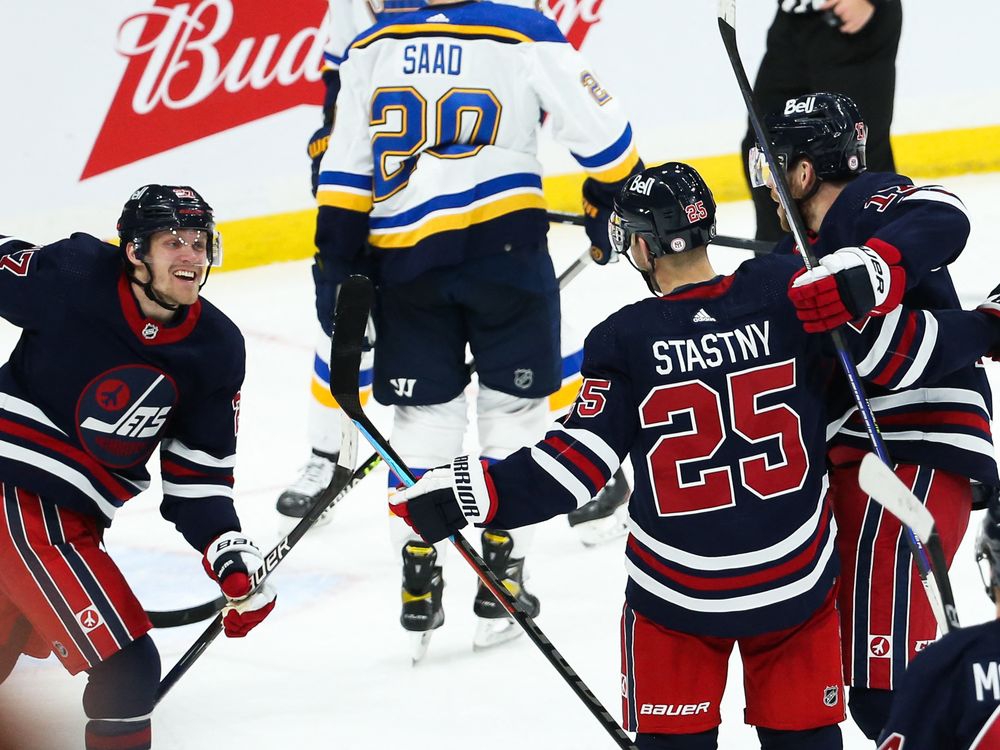 Winnipeg Jets forward Paul Stastny (25) is congratulated by teammates after scoring a goal against the St. Louis Blues during the third period at Canada Life Centre in Winnipeg on Dec. 19, 2021. Photo by Terrence Lee /USA TODAY Sports

Describing the Winnipeg Jets’ 4-2 victory over the visiting St. Louis Blues on Sunday afternoon at Canada Life Centre is a bit of a choose-your-own-adventure.

You have interim head coach Dave Lowry recording his first win as a head coach in the NHL just 48 hours after Paul Maurice’s shock departure and Lowry’s hasty installment as the team’s bench boss.

There’s Paul Stastny producing his 500th NHL assist, a career milestone that was buoyed on by a three-point night where he scored twice, including the game-winning goal.

On the younger side of the lineup, you have Kristian Reichel, 23, take his first solo lap prior to his first NHL game, playing 4:27 after being called up earlier in the day.

And then, perhaps most importantly from a team standpoint, the Jets returned to a successful brand of hockey to snap their three-game winless streak, improving their record to 14-11-5 right before the team embarks on its now-extended Christmas break, at least from game action.

“I think we realized the importance of the game,” Lowry said. “Obviously being a division game, and where we are in the standings, the week that we had lying ahead of us. We know we have to play a certain way to give ourselves a chance to win, and we were able to do that.”

Speaking of that week lying ahead, the Jets will only have practice days between now and the Christmas break, which kicks in on Dec. 24.

During the game, the NHL and NHLPA pumped the brakes on cross-border travel until after St. Nick slides down chimneys later this week. That put an end to what would have been a one-off against the Dallas Stars in the heart of Texas on Wednesday. On Friday, their game against the Nashville Predators was postponed due to the Preds being shut down by a COVID outbreak.

The rest and a couple of days of practice could be beneficial for the Jets, who have had a wild past few days with Maurice’s exit.

On the ice on Sunday afternoon, however, there seemed to be no apparent residue from the coaching change.

Winnipeg’s top line of Stastny, Nikolaj Ehlers and Mark Scheifele combined for nine points, including all four goals, to lead the Jets to victory.

Ehlers’ 12th opened the scoring at 4:40 of the second period. Ehlers finished with a one-goal, three-assist line in the game.

“Since we got put together last game, Nikky and I have talked a lot about certain plays like that,” Scheifele said.

The goal came from a perfect backhand pass from Scheifele to Ehlers, who snuck into the slot in front of Blues starter Jordan Binnington, back in the crease after a seven-game absence due to COVID-19 protocol.

Stastny’s milestone assist was the secondary apple on Ehlers’ goal.

Ehlers showed incredible awareness, too, picking up the puck immediately after he put it into the back of the net.

“(Adam Lowry) said that it almost looked like I grabbed the puck before it went in,” Ehlers said. “I mean, everyone has known he needed that one to get 500. It’s awesome. It’s exciting. Now he’s never going to forget about me.”

The Blues would tie the game 1-1 with Vladimir Tarasenko’s 12th breaching Connor Hellebuyck at 13:47, but the two-goal lead would be restored three minutes later with Scheifele notching his eighth.

From there, it was Stastny’s show.

He put the Jets up 3-1 at 4:40 of the third and then saved the team from what could have been a back-breaker after Niko Mikkola scored shorthanded to pull the Blues 3-2, scoring 16 seconds later on the power play to make it 4-2.

“I think we could feel it. There was excitement on the ice, in the building,” Stastny said. “When you haven’t won in a while and you’re up two goals, you have a power play you think you can finish them and all of a sudden, they score a nice shorthanded goal. We just wanted to get out there and try to get that momentum back, whether it was scoring a goal or whether it was just keep attacking and keep playing aggressive.

“(Ehlers) made a good play slowing up both guys and you know (Adam Lowry), obviously, on the forecheck, giving it back to (Ehlers) so a big goal at a big time in the game. That was needed. And then I think (Hellebuyck) took care of the rest.”

Hellebuyck made 26 stops for his 11th win of the season and handed the Blues their first regulation loss in eight games.

Some elective surgical procedures in Winnipeg to be postponed for pressing, emergency procedures: Shared Well being